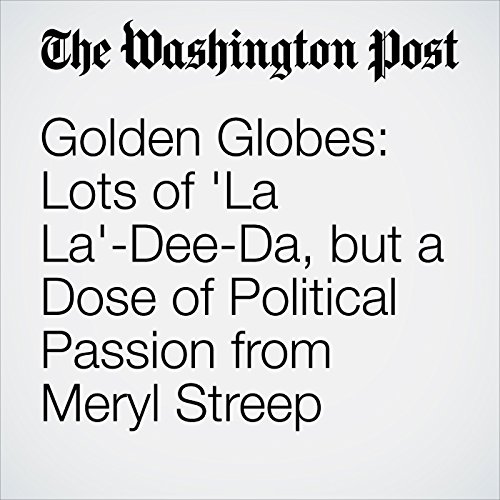 Golden Globes: Lots of 'La La'-Dee-Da, but a Dose of Political Passion from Meryl Streep

The Golden Globes — that marvelously meaningless mash-up of film and TV awards bestowed by a small club of foreign journalists working in Hollywood — got off to an energetic start Sunday night with a clever la-dee-da-dee song-and-dance ode to the film “La La Land,” which later took home just about all of the big movie awards, including best comedy film and actor (Ryan Gosling) and actress (Emma Stone) and prizes for best director, score, song and screenplay.

"Golden Globes: Lots of 'La La'-Dee-Da, but a Dose of Political Passion from Meryl Streep" is from the January 09, 2017 Lifestyle section of The Washington Post. It was written by Hank Stuever and narrated by Jenny Hoops.