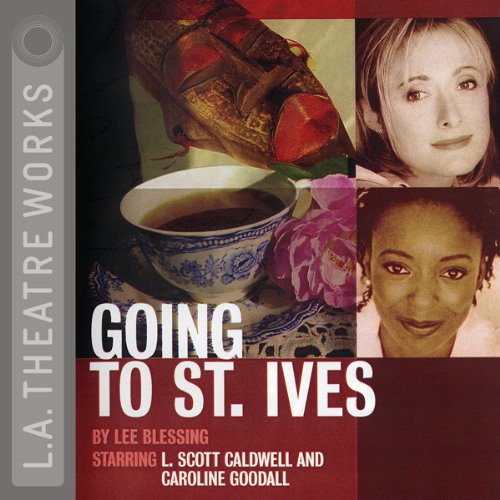 The dignified mother of a ruthless African dictator travels to England to seek treatment for her failed eyes from a renowned ophthalmologist. At first glance, it looks like one woman helping another, but each woman brings to the other her true agenda, triggering a profound moral dilemma and a chain reaction of events with great personal and political aftershocks.
(P)2004 L.A. Theatre Works
Teatro e spettacoli Stati Uniti
Mostra di più Mostra meno

If you could sum up Going to St. Ives (Dramatization) in three words, what would they be?

I was totally mesmerized by this dramatization. So much so that, even though I only heard a few lines live on L.A. Theater Works the day it was broadcast, not even the title, I went back weeks later and searched to try to find the play. I was able to download and listen to the program in its entirety, and was not disappointed. The performances of both actresses were excellent, but I was simply rapt, enraged, and challenged by the acting of L. Scott Caldwell, who plays the dictator's mother.The subject matter is extremely heavy, but the pace is quick enough so it doesn't weigh down the drama.

The tension between the two women, watching their mutual resentment turn to something bordering on a type of affection, was extremely well crafted.

Which character – as performed by Caroline Goodall and L. Scott Caldwell – was your favorite?

When the dictator's mother describes what she did (can't say what it is), it was amazing. It's like I was there.