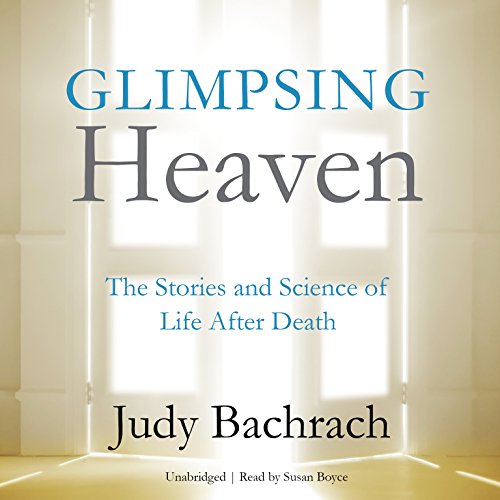 If you caught a glimpse of heaven, would you choose to comeback to life?

Investigative journalist Judy Bachrach has collectedaccounts of those who died and then returned to life with lucid, vivid memoriesof what occurred while they were dead, and the conclusions are astonishing.Clinical death - the moment when the heart stops beating and brain stem activityceases - is not necessarily the end of consciousness, as a number of doctors arenow beginning to concede. Hundreds of thousands of fascinating post-deathexperiences have been documented, and for many who have died and returned, lifeis forever changed.

These days, an increasing number of scientific researchersare turning their studies to people who have experienced what the author callsdeath travels - putting stock and credence in the sights, encounters, andexciting experiences reported by those who return from the dead. Throughinterviews with scores of these "death travelers," and with physicians, nurses,and scientists unraveling the mysteries of the afterlife, Bachrach redefinesthe meaning of both life and death. Glimpsing Heaven reveals both the uncertainty and the surprising joys of life after death.

I'm fascinated by the NDE. This book is written by someone who was very skeptical about the whole idea, but went to work in a Hospice, which started her on this journey of trying to find answers.. Also, her mother had dementia, and I assume she needed to be assured that there was something better waiting for her mom.. My parents both suffer from different forms of dementia, so I would guess that attracted me to this particular book. It's well worth the listen (or read).. Lots of fascinating stories as well as theories from professionals, both pro and con.. I've listen and read a number of NDE books.. some were just a little too religious for my taste, while others just felt true.. This is one of those true ones..

Where does Glimpsing Heaven rank among all the audiobooks you’ve listened to so far?

The author having started out very skeptical and unenthused about her magazine assignment and ending up wanting to write the book.

Which character – as performed by Susan Boyce – was your favorite?

Excellent narration of all the characters.

I read most of this book a couple of times and ended up doing online research afterwards because it was so fascinating.

This extremely well researched book tells completely about near death experiences both the positive ones, and those that are more disturbing. It also talks about the biology involved. The description also includes messages resulting from the experiences.

I enjoyed this book, it was laid out nicely, stories were interesting and the narrator competent. I would have like to hear more detail of each story, delved into more of each experience, maybe more follow up. But again, overall, it was good and provides good insight into this topic, one, I'm sure, many seek.

boring, nothing new, depressing, reader was boring as well, don't waste your time and money.

although I did like this book I really wanted to hear more from the individuals.

I would have enjoyed more specific details of interviewees experiences instead of the general overall picture of what a death experience is.

Changed everything that I thought I knew.

Thank you for writing this. My Mother passed recently and I had so many questions, sadness, anger, guilt. This has given me so much peace. I cannot even thank you for this.

This book I believe opened my third eye! The way that I look at life and especially death has changed for the good.

I thank the author, for this book. I will never look at death the same way again.

I was looking forward to this book, but the narrator's performance was so stiff, pointed, and robotic, I couldn't get through it. Her speech class style was not a treatment that subject matter such as this deserves.
I will try to find the book at the library and read it. Shame.
Audiobook companies are really failing when it comes to GOOD narrators. Audible needs to step in and ramp up their own production of audiobooks based on the poor performance of the majority of audiobooks available.

What made the experience of listening to Glimpsing Heaven the most enjoyable?

The fact that it's something we'll all experience - one day!

Characters as individuals didn't matter too much; it was the flow of ideas and experiences.

Have you listened to any of Susan Boyce’s other performances? How does this one compare?

As a non fiction book, this would be more of a documentary.

As a subject this is something that has always fascinated me, and the older I get the more fascinating it becomes. But I liked the fact that this book was not just an endless list of similar stories; it was more a set of ideas with people whose stories supported the ideas.
A fascinating book, well written, albeit from an American point of view - not a criticism - and the narration was very good.

A truly remarkable insight into what can happen to Conciousness when we have lost all Brain activity, and have seemingly passed away. Well researched, well written, and worth listening too.

She gives a lot of detail about each person and their experiences. She interviews the experiencers and this fills out their stories. The nature of the death experience is also explored and she considers the ideas of those who have made a study of this phenomenon.

Most books on the topic do not give much detail. The author has done a great job in finding out more about the people and what happened to them before and after their NDE.

I did not like the narration at all. In fact I found her reading style very distracting and irritating. Her pausation is very odd It made me wish I had bought the kindle version.

Do you think Glimpsing Heaven needs a follow-up book? Why or why not?

No it is pretty comprehensive.

I recommend it for anyone interested in this phenomenon as it's one of the best books on the topic.

We all wonder what is on the other side of life, this book gives you a glimpse from the perspective of all ages, and professions.