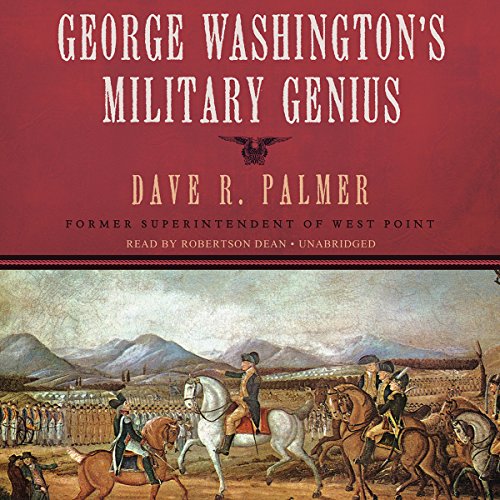 “The British did not have to lose; the patriots did not have to triumph,” writes Palmer as he proves, beyond a doubt, that Washington’s continuously changing military tactics were deliberate, strategic responses to the various phases of the war and not the result of his lacking a plan of action.

Confronting the critics who say Washington’s battlefield success and ultimate victories were a function of luck, George Washington’s Military Genius proves once and for all that Washington deserves the title of America’s preeminent strategist.

“This is military history in the grand style.” (Joseph J. Ellis, author of  His Excellency: George Washington)

Super intersting and informative, yet entertaining

The author lays out the facts in a way that flows well and keep the reader (or listener) involved.
The reader does a great job and I wish they would read more these style of books.

This book lays out the military strategies that George Washington employed to win the American Revolution.

A good overview of Washington’s strategy

Good listen, a good overview of the war, the strategy on each side and the limits the state of infrastructure placed on each side.

The historical background of General Washington is enlightening. British perspective is also very useful. Enjoyed this very much.

Takes a long time to set the table for GW's military strategy, but is a good analysis of his overall prowess once he gets there