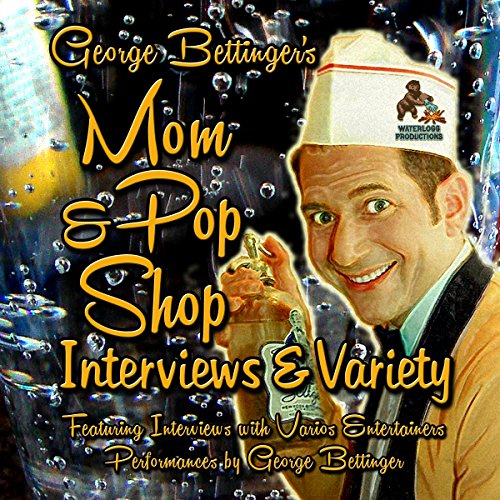 Comedian and radio personality George Bettinger talked with Emmy-winning actress-comedienne Lilly Tomlin (Laugh-In) just after she received her Kennedy Center Honors Award. Tomlin, who currently stars opposite Jane Fonda, Martin Sheen, and Sam Waterston in the hit Netflix original series Grace and Frankie, is just one of 10 rare and unedited celebrity interviews in this collection:

"These are exclusive and unique interviews I have archived over the years. My radio show, The Mom & Pop Shop, can be heard internationally on Mondays, Wednesdays, and Fridays at 4:00p.m. (EST)." (George Bettinger)

In 1982 George Bettinger got started in TV with Movie Magic, a series he wrote, produced, and hosted. Movie Magic (later The George Bettinger Show) ran on Manhattan Cable Television from 1982 to 1987. It was cartoons, comedy, and fun. Soupy Sales said George made him think of himself when he was young.

During the making of Movie Magic, George was also appearing on The Joe Franklin Show and The Uncle Floyd Show. Next he moved on to doing radio and TV commercials. Soon he was producing and directing corporate training films for companies such as Pfizer, Hoffman LaRoche, The Cancer Institute, and Maimonides Medical Center. His CDs have been given fine mention in The Daily News, New York Post, and Herald Tribune newspapers. Currently George is teaching acting and creative writing and continuing to host live shows.