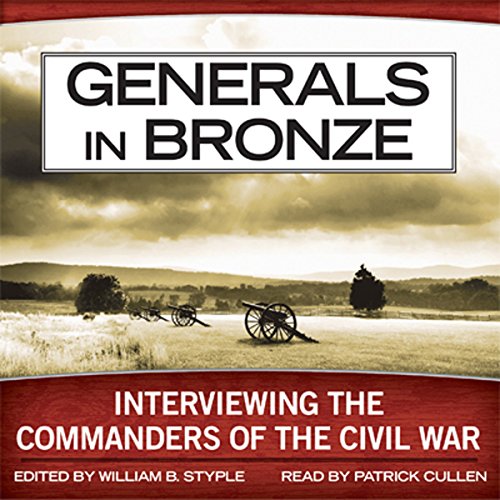 In the decades that followed the American Civil War, artist James E. Kelly (1855-1933) conducted in-depth interviews with more than 40 Union generals in an effort to accurately portray them in their greatest moment of glory.

"I had always felt a great lack of certain personal details," Kelly explained. "I made up my mind to ask from the living officers every question that I would have asked Washington or his generals had they posed for me, such as what they considered the principal incidents in their career and particulars about costumes and surroundings." When, during one interview, a general declared, "I don't see how you can show this in a picture," Kelly responded: "Just tell me the facts, and I'll attend to the picture." By recording those stirring facts, Kelly left us a truly unique picture of the great figures of the American Civil War.

This has everything I love in a history book.

This has everything I love in a history book. 1st I witness accounts and thoughts from the people who were there.

You won't find this stuff in a history book!

I found this book hard to put down! Kelly asks questions that any of us would like to ask the Generals who fought in the Civil War. You get a very good idea what it was like to know them in personal life.

This book was well organized, and Mr Styple is to be commended for digging this one up and giving it to us as Kelly would have liked to have done.

Also, there is a follow up book "Tell me of Lincoln" that expands on the person of Lincoln and Old New York.

I enjoyed the audiobook, but personally I believe the appeal of this book is limited to the hard core Civil War enthusiast. The recollections of the leaders and generals of the period was worth the wait, however, one must listen to quite a bit of sculptural detail about eyes, noses, foreheads, etc. when he describes each person he interviewed. The meat of the book is in the interviews that sculptor and artist James E. Kelly conducted with historical figures in relation to important events of the Civil War. I am grateful that Mr. Kelly had the foresight to make a written record of those interviews, it made for an interesting listen.

Perhaps, if they wanted a first person/second hand take on people from the ACW.

What other book might you compare Generals in Bronze to and why?

It's fairly unique. Maybe compare it to a modern celebrity autobiography, where there's a lot of name-dropping.

Would you listen to another book narrated by Patrick Cullen?

Sure. Good straightforward narration without any extraneous puffery.

Hmmm. Probably, but just because of the subject matter.

At times very interesting, at other times maddening. Author has contact with major figures of the American Civil War, but never really gets deep into questioning them. We get some insight, but much of the insight has to do with how the various generals treated Styple and not because of anything that he discussed with them.