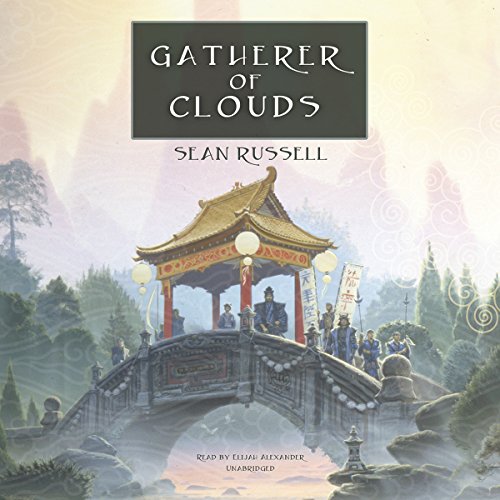 It is the season of war.

As the plum blossom winds herald spring in the Empire of Wa, Initiate Brother Shuyun, spiritual advisor to Lord Shonto, the military governor of the northernmost province of Seh, receives a shocking message from the barbarian lands. The massive army of the Golden Khan is poised at their border. Forced to retreat south, Lord Shonto is caught between the pursuing barbarian hordes and his own hostile emperor’s Imperial Army.

Meanwhile, the beautiful young Lady Nishima again becomes involved in court intrigue as well as in a dangerous romantic liaison.

Even as this trap closes on Shonto and his allies, Brother Shuyun faces a crisis of his own. For in the same scroll that warned of the invasion was a sacred udumbara blossom, a sign his order has awaited for a thousand years, a sign that the Great Teacher has finally been reborn. And now it may fall to one young monk with extraordinary powers to save his empire.

I have enjoyed these two books so many times. each time I hear the story I get so wistful. truly pulls out my heart for the characters. well performed it flows right along. this is a story you will want to hear again and again.

One of the most satisfying books I have ever read

The Initiate Brother is the first book in this series. As my review of that book states, I think these two books are better than Lord of the Rings. (I was just thinking that if I were only allowed to read 10 books over and over for the rest of my life "The Initiate Brother" and "Gatherer of Clouds" would be two do those 10).

If you have already read the first book I am pleased to tell you that this second book is even better. The events come together naturally without a hint that some writer is following a "plot." Everything about the way this book progresses makes me think that Sean Russell did not "write" these books, but rather he was able to visit an alternate universe where these characters reside and he simply recorded everything he saw and heard. This is the highest compliment I can give.

What I always want to know is "should I get this book on audible or the paper copy?" I have multiple copies of these two books in paperback but I always listen to this audio version. I prefer to listen to a novel when the reader does a nice job and when the story flows.

You see, I only prefer the paperback version of a novel when reading a book I do not really care about -- that way I can skip entire pages when necessary. But when reading a book like this, a book that I love, I prefer the audio because each word is a gift and each scene is something that I can vividly imagine as the narrator conveys the various characters at just the right pace.

Books like this one are best enjoyed on audio.

One of my favorite reads so decided to enjoy being read to. Overall the performance was okay, I really struggled with the monk who sounded like an off brand Yoda. there was another character, a merchant that reminded me of a shop keep from the new York diamond district. Otherwise...these books are well worth the time and money.

Great book, performed as it ought to be.

I originally read this. Great fantasy that presents a blend of east Asian cultures. Poetry and imagery in this style is central to the book, and I felt this voice performance presented it quite well.
If I had to pick one complaint, I wish brother satake sounded less like kermit/yoda.

I read both books back to back and would recommend them to readers who don't mind their adventures told at a slightly slower pace, interspersed with some philosophy and a little poetry.

I read and listened. Narration is fine, but not brilliant.

A medieval Asian tale (Japanese-Chinese mix) with the slightest fantastical bent, set in a mythical land (see maps) with lords and ladies, peasants and emperors, warriors and monks, politics, lies, and conspiracies, murder, greed, and ambition.

The darkness is offset by several likable and honorable characters who feature across both books. Characterization and character development is a strength, esp for Jaku Tadamoto. Relationships among the allies are heartwarming, and the romance doesn't overwhelm. The plot is unpredictable and twisty, if slow at times. Most events and actions are seen thru the teachings of the Enlightened One, Lord Botahara, The Perfect Master, and a religion similar to Buddhism (but the book is not preachy).

The story rings almost of speculative history with names and places changed, but not quite.

Told in third-person -- the only way to travel!

Main Characters:
(Last names go before first names in this culture, and the honorific suffix -sum may be attached to show friendship or endearment, sometimes replacing the final syllable, so Nishima becomes Nishi-sum)


House Yamaku (displaced the Hanama Dynasty):
Emperor Akantsu II, Son of Heaven
Emperor's consort Sonsa (dancer) Osha-sum
Emperor's men from House Jaku:
General Jaku Katta, advisor to Emperor and Captain of the Imperial Guard, aka The Black Tiger
The youngest of the three Jaku brothers, Yasata had neither the martial skill of Katta nor the intellectual brilliance of Tadamoto.

Lord Komawara Samyamu from Seh province: Ah, yes, Lord Shonto thought, the same slim build and the long thin nose. If this youth is anything like his father, his apparent lack of muscle is deceptive. The old Komawara had been a strong swordsman and lightning fast.

What made the experience of listening to Gatherer of Clouds the most enjoyable?

I have read and listened to this book and the prequel probably a dozen times and am always amazed at the complexity and depth of the novel. It's an amazing story, heavy on symbolism, culture, and mysticism.

The stately pace of the novels is fantastic.

Have you listened to any of Elijah Alexander’s other performances before? How does this one compare?

Only the other book in this series.

Alexander is a solid narrator with a good command of voices, BUT there are 2 characters that are downright annoying. Both are Asian, but one sounds like a New Jersey cab driver and the other sounds (no kidding) like a bad Yoda impersonation.

Luckily these are minor characters, but when they appear, their voices are somewhat of a distraction.

This is the ONLY downside to a fantastic audiobook experience, though.

I was genuinely sad when it was over.

What made the experience of listening to Gatherer of Clouds the most enjoyable?

I loved the forbidden relationship between Brother Shuyun and Lady Nishema. And the turmoil they find themselves and the empire in. I did feel like the story was not finished when it ended. I wanted more. Sometimes it felt like the coincidences and happenstances were too lucky and convienent, but overall, I thoroughly enjoyed everything about this novel.

There are a lot of times, I find male authors have a hard time with female voices and making them .... not a parody. But I really enjoyed the way it was done here.

If you could sum up Gatherer of Clouds in three words, what would they be?

What was one of the most memorable moments of Gatherer of Clouds?

not sure, there were so many

just the right tones and inflections, he enhanced the story and added color

This is the second book in the series that results in common warriors turning into legends, the rebirth of the eightfold path, and compassion in the face of death. It is truly an amazing piece of fiction that should be read by everyone.

The book feels like a fable or fairytale. The course of many paths feels often predictable and ritualized, yet instead of feeling trite or constraining, this delivers a sense of rightness and wholeness.