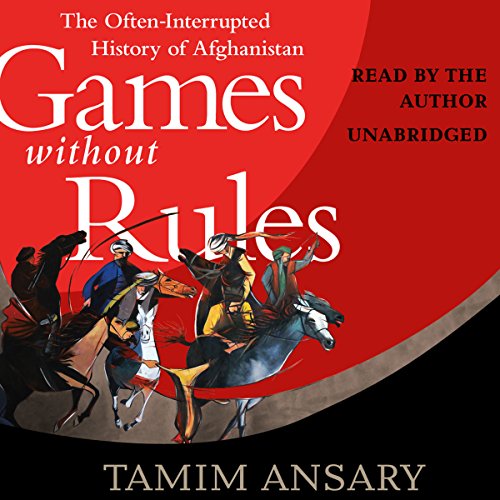 Today, most Westerners still see the war in Afghanistan as a contest between democracy and Islamist fanaticism. That war is real, but it sits atop an older struggle between Kabul and the countryside, between order and chaos, between a modernist impulse to join the world and the pull of an older Afghanistan - a tribal universe of village republics permeated by Islam.

Now, Tamim Ansary draws on his Afghan background, Muslim roots, and Western and Afghan sources to explain history from the inside out and to illuminate the long, internal struggle that the outside world has never fully understood. It is the story of a nation struggling to take form, a nation undermined by its own demons while every 40 to 60 years a great power disrupts whatever progress has been made. Related in storytelling style, Games Without Rules provides revelatory insight into a country at the center of political debate.

Tamim Ansary is the award-winning author of Destiny Disrupted and West of Kabul, East of New York. He has been a major contributing writer to several secondary-school history textbooks offering an Islamic perspective.

©2012 Tamim Ansary (P)2012 Blackstone Audio, Inc
"A breezy, accessible overview of centuries of messy Afghan history, including the present military quagmire…. Lively instruction on how Afghanistan has coped, and continues to cope, with being a strategic flash point." ( Kirkus Reviews)
"In Games Without Rules, Tamim Ansary has written the most engaging, accessible and insightful history of Afghanistan. With gifted prose and revealing details, Ansary gives us the oft-neglected Afghan perspective of the wars, foreign meddling, and palace intrigue that has defined the past few centuries between the Indus and Oxus. This brilliant book should be required reading for anyone involved in the current war there - and anyone who wants to understand why Afghanistan will not be at peace anytime soon." (Rajiv Chandrasekaran, author of Little America: The War within the War for Afghanistan)

As an Afghan born in Kabul and raised in Europe, this book has been an incredible source of info. It systematically and very neutrality answers a lot of big questions about the ongoing wars and foreign economical and political stakes. It is common knowledge that the US and Western powers have an interest in maintaining instability there and this book explains the WHY without falling into stigmatization.

I would highly recommend this read to any Western country politician because there is a clear win win to be sought if Afghanistan was better understood.

I loved the final modern portion. I spent 2 deployments with the Navy Seabees in Afghanistan workinf with local artisans and love the culture. I havent been back in 5 years but its great to hear from someone who is native how it is coming back.

As good as David McCullough

Afghans deserve a voice like Tamim Ansary to tell their modern history in contemporary English. His style reminded me of my grandfather who told me among many others about the reign of Amanullah Khan in relatable way full of rich imagery and humor. Most other history books about Afghanistan originally written in English are by outsiders which makes Afghanistan and its history seem like an exotic carnival completely disconnected from modern issues, or a place full of gloom and tragedy. Not to say that Afghans haven’t lived through some crazy carnival type periods filled with pain and tragedy, their story is not very different from most people elsewhere like the United States. Except that every time they’ve tried to create a nation that allows its inhabitants to more freely pursue happiness, they’re rudely interrupted. These interruptions in past couple of hundred years came in form of three wars with Great Brittan, Russian invasion, a civil war, followed by a brutal Taliban rule, and the ongoing U.S/NATO occupation. In those brief peaceful periods yet greatly influenced by outside powers, Ansary argues Afghans made great progress to become a functioning nation with lingering conflict between urban and village perspectives. Solaiman Afzal

Both history and perspective from a guy who knows both extremely well.

His own family history life experience and education uniquely qualifies him to tell the story of Afghanistan like nobody else can. Details are great but the ability to provide perspective is what makes this book a must for anyone interested in Afghanistan.

It was quite informative. It provides background and history to modern day issues and news stories involving the country of Afghanistan.

I knew very little of the country besides just bits and pieces from the news over the years. This book helped fixed my knowledge gap.

Tamim Ansary, author of the delightful “Destiny Disrupted”, does it again with a sweeping history of Afghanistan. He writes with flair, an occasional dose of wry humour or irony, and always with a command over the topic that reflects his deep insight into his home land. Classified as “unputdownable” !!

Outstanding book for anyone who wants to know more about Afghanistan

I really appreciated this book, I do some work in Afghanistan and it’s hard to find any knowledgeable sources about Afghan culture from the inside. Most books and movies about the region are about NATO or Soviet soldiers fighting Afghans and that’s a tragedy.
They’re a complex culture that is not well understood outside of the region. This book is an amazing way to learn some of their history and why the culture is the way it is.

I encourage this book for anyone who works in Afghanistan, with Afghans, or is even curious about the people.

Perhaps the finest history of Aghanistan ever written, replete with exquisite insight and grounded, balanced analysis.

Every American should listen to this.

Absolutely loved this book and Tamim Ansary's writing in general. I've also listened to Destiny Disrupted as well, and I would recommend listening to it along with Games Without Rules. Ansary is absolutely hilarious- I had to pause the book a few times so I could laugh at some of his commentary- which really helps when dealing with all the dark stuff. He was born and raised in Afghanistan but has lived in the US for a long time, so he's able to bridge the gaps of perspective and culture really well.

I read a lot of history, and the identity and opinions of the writers always come through in their work, so I think it's really important to read books written by an even-handed narrator. This book does a masterful job. I only wish it was published more recently so that I could hear what Ansary has to say about the present state of affairs in Afghanistan. I, like most young American adults, learned no Afghani history whatsoever when I was in school, and that's a pretty big problem given that America is trying to reshape their whole society.

TL;DR: Great book, fantastic performance, Americans who know nothing about why we are at war there should read this.

I really enjoyed it. The story provided great context on how to look at Afghanistan and how going forward should proceed.

This is a fascinating journey through the history of Afghanistan and its people. Thoroughly knowledgeable and eminently readable/listenable, the author quietly and authoritatively relates this complex nation's background, bringing it up to the present day. It is a book that would repay, at least for me, a second reading, because of the complexity of the subject. I recommend it.

A really interesting history of an extremely complex country, written and performed with humour by the author. Thank you.

This does not seek to be an authoratitative history of Afghanistan. The book has a very informal, openly subjective, style, there are a few misunderstandings about other countries, and it only gives the last couple of centuries of Afghan history in any detail. Even within this time-frame, the earlier parts of the book are principally setting the scene for using very recent history to communicate an understanding of contemporary Afghanistan. If you can accept this, and so long as you don't object too strongly to the author's narrative, Games Without Rules is an outstanding book.

--- Rather than simply telling the story of powerful individuals (though it does this too), the book conveys as much of a country's culture as a history book can hope to do, which is essential for a westerner to begin to understand recent events. To pick just one moment within the book, who could fail to empathise with, even be warmed by, Kabul's chorus of "Allahu Akbar" as a rejection of the Soviets? Who could fail to see a link between this and the later direction of Afghanistan's domestic politics? And who could fail to see why the British, Soviets and Americans all had a lot in common, when viewed from the Afghan perspective?

--- Unlike some readers, I appreciated the author's frequent anecdotes and mentions of his own family. Firstly, they helped to give perspectives of slightly more ordinary Afghans (though of course his family are not ordinary), something too lacking from most history books. Secondly, they laid bare biases (for example, why he would be more sympathetic to the USA than to other foreign powers), which all authors have, and which are best placed in the open rather than concealed by artificial distance.

--- The narration is much better than you would expect from the author of a history book. It is an audiobook book that I can equally use as wallpaper, even sleep to, or closely focus on for the fascinating story it tells.

A must read for those interested in Afghanistan. Fantastically narrated by Tamim Ansary himself - much more powerful.

The best book on Afghanistan

As an Afghan I found this book really informative and extremely well balanced and honest. The author has done a fantastic job in explaining the situation from an Afghan perspective. The explanation of Afghan society and how it has shaped Afghan history is really accurate. I think this can be a very good read for anyone trying to make sense of this country and to understand why it has suffered so much. I can’t recommend this book enough. At the end I want to thank the author Tamim Ansary for his hard work in writing such a masterpiece.

A great canter through the history of Afghanistan.

Read (listen) for a great taster of the Afghan psyche.

Expertly narrated by the author, this book gives a fantastic insight into the cultural nuisances of a nation with a troubled history. It's focusses on the numerous warlords, power brokers, strong men and religious leaders who have played a role in running an enigma of a "nation" before during and after the invasions of world powers.

Particually useful for an insight into the Afghan approach to life, regurally explaining logically why the people do what at first glance appears completely illogical from a western perspective.

The only negative I would suggest are some comments relating to the countries current woes are presented as factual but are more likely the authors opinion. Otherwise great if you're coming for a short trip or just plain intrieged by the mysteries of a complicated land.

The authors obvious affection for his country makes this a compelling listen. I found that I was drawn in, getting increasing enjoyment as the story unfolded towards the present.