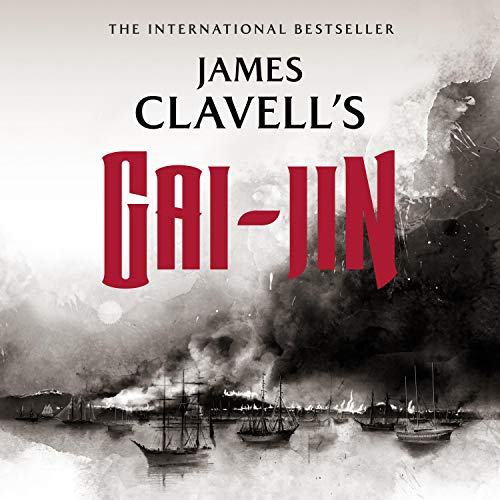 The heir to the magnificent English trading company, the Noble House; the direct descendant of the first Toranaga Shōgun, battling to usher his country into the modern age; a beautiful young Frenchwoman forever torn between ambition and desire - their lives intertwine in an exotic land newly open to foreigners, gai-jin, and torn apart by greed, idealism, and terrorism. Their passions mingle with monarchs and diplomats, assassins, courtesans, and spies. Their fates collide in James Clavell's masterpiece set in 19th-century Japan - an unforgettable epic seething with betrayal and secrets, brutality and heroism, love and forbidden passions.


James Clavell did a great job with Shogun, so it saddens me this book got so little attention during production. I hope Clavell is picked to remake this shameful attempt at Gai-Jin,

This book is actually great. Four stars at the very least, but as an audio book it's hard to rank.

This is due to the poor quality of the narration. The accents are off. The French accent is hard to listen to, but the Japanese ones are something out of a nightmare. Stereotypical to the point of being racist. It's the worst I have ever heard in an audio book.

Furthermore I have no idea how so many pronunciation errors got through the production either. Edo, becomes Yeido.
Sensei, is spoken something close to senzai. Which sounds like they are saying detergent in Japanese. There are plenty of such errors, and with the god awful pronunciation on top of that, I for one can't enjoy or listen to it anymore.

I hope that a new version is released.

Much better than advertised.

I have to say that reading reviews of this book made me bit skeptical about how I would like it, but I was happily disappointed in the end. The readers performance on characters is okay in my opinion, I don't really mind the exaggerated Japanese or French accents, as even if it might be bit over the top, it makes the characters easily discernible. The Japanese names on the other hand are often very badly pronounced and I'd really hoped that the reader would have known the basics of Japanese. Anyways, it might not be a top production, but i've heard worse.

Many have commented on the story that they stopped around the halfway point of the book. Without any spoilers, I'd say that it's a great mistake as the book gets much better after the halfway point, and the plot is very enjoyable in the end even taking into account the rough points.

Gorgeous book and enticing narration. A must read to understand Japan and England and colonialism and people

I'm not sure what to think about this book. On the one hand, it's another fine Clavell piece with as much twists and cunningness as his previous ones. On the other, this great plot comes after literally 35h of exposition, of setting up the background of the characters before they mature enough to the cunning level he loves. So meh. Not a must.

Such a masterpiece, must read or listen

Definitei one of the best trilogies ever. It was difficult to continue with daily tasks, even breathing takes a second role when such a novelist weaves there stories...

awesome 👍 worth it to keep track of it to the end

a very good book, the naration seems odd atfirst and might seem a bit... but it is a great work and we'll read. intriguing plot, whit space for imagination and as the last lines state, God's or no God's, dosent matter, a sense of humor is good, ne?

A captivating insight of Nipon (Japan) history. But with a plot very close to Shogun just from a different prospective and as a back plot of the main story, surrounded by lots of small stories of love, blackmail, life and death completing the "Big Picture" very nicely. Turning this book into a masterpiece.

PS: Be prepeared for a treat.

Compelling though the least of Clavell's Asia Saga

A plethora of characters and a meandering story, it's none the less compelling for its historical perspective (of a sorts).

The narrator does a fine job, though accents (especially the Japanese) border on the worst sort of stereotype. Japanese pronunciation is also not up to scratch.

buy if you liked Shogun and just want more

Now, this was a Clavell book that I had only read once when it came out (having read and re-read his first 4 Asian Saga books multiple times). I vaguely recalled the original read as being slightly disappointing - long book, not as gripping as e.g. Shogun. However, I've been delighted to re-encounter it, reading the series in chronological order probably helping a little bit.

The story itself is as complex as ever, with a wide range of characters on both the European and Japanese threads. Once you have them straight in your head, they take you along with them, with every more twisted connections and secrets.

The narrator did a brilliant job, apparently coping with ease in switching from Scottish accents to English to French to Japanese to Russian to American.... you get the picture.

For me, then and now, the characters didn't capture my emotions as much as e.g. Blackthorne, or Dirk and May-May. But I enjoyed the story much more on this 2nd encounter, and rate it highly.

Yes! It tells more than a beautiful story. This book brings you in the mind of its characters and they live you and makes you better. Absolutely Epic

What was one of the most memorable moments of Gai-Jin?

The duel between Toranaga Yoshi

What does John Lee bring to the story that you wouldn’t experience if you had only read the book?

He gives life to characters. When you listen this audiobook they are standing in front of you.

No! You do not want the pleasure to finish so soon

The best thing about this book are the characters. They are all so complex and perfectly described. By the end of the book they are friends and they live you.

Another masterpiece, flawed but brilliant. The reader is phenomenal at creating distinct and recognisable voices for each character, though his Japanese accents and pronunciations are appalling.

Such a great adventure , so well read!
James Clavell was a great author it's a shame he did not write another between this one and Noble House !

I've had enough after 5 hrs. A very weeek story, I definitely dont recommend

A surfeit of intrigue and passion and not a dull moment. The characters are beautifully drawn. Excellent narration.

very deep story with many characters, what I like most about Clavel is the depth to which he is able to transmit the culture, mindset and thoughts of the different hierarchies of characters from different country's.

Started OK, good characters, but too much story about nothing. Never really got going and then faded out with plenty of the story left to go. I will think twice about getting another of his books.

It seems like not much of an ending at all. Very disappointing and definitely not up to the standard of Shogun and Tai-Pan.