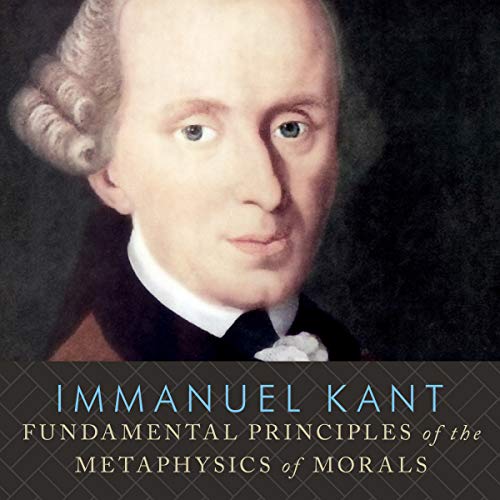 Fundamental Principles of the Metaphysics of Morals

Immanuel Kant's Fundamental Principles of the Metaphysics of Morals, first published in 1785, lays out Kant's essential philosophy and defines the concepts and arguments that would shape his later work.

Central to Kant's doctrine is the categorical imperative, which he defines as a mandate that human actions should always conform to a universal, unchanging standard of rational morality. Directly opposed to utilitarian philosophy, Kant's theories have been broadly influential since their publication and stand as a seminal contribution to ethical thought.

Categorical Imperatives for Everyone

“Act only according to that maxim by which you can at the same time will that it should become a universal law.”
― Immanuel Kant, Groundwork of the Metaphysics of Morals

In some ways the Categorical Imperative appears like a philosophically formal and universally binding adaptation of the Golden Rule, **kind of**. When one sees how many different versions of the Golden Rule have appeared independently in space and time, perhaps Kant was onto something. Anyway, I enjoyed reading this if only because a lot of what I've studied in political philosophy and moral policy was either born out of Kant's thoughts or as a reaction to it. Rawls' Veil of ignorance seems to be a recent, direct descendent, as Kant's social contract was a child of Rousseau, Hobbes, and Locke.

A Pivotal Thinker in the History of Mind

Ever since my first read of Kant's "Critique of Pure Reason" I smile quietly inside myself with appreciation of the man's incredible genius. I feel the same way about this book, "Fundamental Principles of the Metaphysics of Morals." Anybody with a serious interest in philosophy should read and/or listen to works by Immanuel Kant. But don't expect kid gloves. His thinking is difficult until you start catching his drift -- then it is wonderfully fulfilling. I think most people's problem with Kant is that they don't have enough confidence in their own abilities to meet the challenge.

John Lee does an impeccable job in helping us to meet the challenge via his intelligent and wise narration of this book. (Please, John, add "Critique of Pure Reason" to your list of books to narrate).

A guide for living Good

Never trust what modern writers say about classic works of Philosophy. Kant is not only relevant because of the influence he had on latter day thinkers, but, as with this work, he has something to say which makes mince meat out of most of the present day writers. If this book had been published for the first time last year, most readers would have thought it was the greatest book they had read in the decade (or even in their lifetimes).

There is a little bit of getting used to the special language that Kant uses, but it's really not hard to follow if you are familiar with Kant (I am not a philosopher but I want to learn my purpose and how best to be 'good'). He'll use 'synthetic' and 'analytic', the trick I use is since 'synthetic' starts with 's' think 'senses', and analytic is another word for math so think 'math', for 'a posteriori' and 'a priori' (I put them in this order because 'a posteriori' relates to the senses (synthetic) and is after the fact or after experience, 'a priori' relates to 'analytic' before the fact or from first principles or deductively as in a mathematical system. Two other Kantian words are 'subjective' (think 'self' sense it starts with 's' and 'objective' is an 'object' (or thing) outside of yourself.

Kant is really not hard to follow and this work in particular was clearly written such that any one can really follow it because he obviously wants as wide an audience as possible for what he is going to tell the reader. (Now, I will admit that "Critique of Pure Reason' was hard at first but once I looked up those words in the above paragraph I ended up loving what he had to say and how he said it. With Kant you always get a unique way of looking at something and it's not always as important what he concludes as how he gets there. He even says something like that at the end of CPR, but with this book how he gets there and what he says are both well worth the effort).

The reason he wants such a wide audience is because what he's going to tell the reader is an answer to one of the two great universal truths we all seek: 1) knowledge (justified true beliefs) about the world (Aristotle starts his Metaphysics with this fact), and 2) knowledge of the good (or divine) (Plato's formulation). This book is all about the second truth we all want, and to know about the 'good' one must first understand what the good is. This is what he does within this book.

Kant builds a 'ground' based on reason to get at what our unconditional duties are in which we need to grasp the unconditional practical reason (morality) as maxims (universal laws) or as he says 'categorical imperatives'. Or in other words, he uses the infinite to get at our finite understanding of how we should approach life. His methodology is always a pleasure to behold and will teach anyone (including me) how to think better, and his conclusions are one of the best guides on how to live a moral life that I've encountered. I like the Golden Rule (and parts of the Sermon on the Mount), I like J.S. Mill's utilitarian philosophy, and I just love Kant's Categorical Imperatives. A combination of all three is how I choose to live.

In the end, we earthlings, need to understand what it means to be good. All moral philosophy at its root combines empathy with reciprocity of some kind and call for us to be 'good' in some fashion, but 'what is the good (or divine)' is not obvious except usually in some circular fashion, and this book gives an extraordinarily good account for it. Don't worry about the technical language, because overall it is written to be understood, and is an incredibly good self help book that could easily replace almost all the rest of the current best sellers especially the vile self help books which I walk past in the bookstore.

The Heart Of Kant's Thinking...

is contained in this short treatise on absolute rational moral value. Kant is one of the all-time great thinkers in the realm of philosophy and morality, and he should be read by everyone. A warning should go with this recommendation, I suppose. One cannot go in with an E.L. James/Stephanie Myers vocabulary and depth of understanding and expect to come away with much. It takes a familiarity with higher language and higher thought. There is no short-cut to excellence or to understanding it.

I bought this book as an addendum to my Ethics course, but found it too verbose. I even tried listening to it many times. If you're not a scholar, professional philosopher, or me, you won't get much from it.

Good work, hard to listen to

The material contained in this work is absolutely worth your time but it's very dense which makes it difficult to listen to and worth your time to read the physical copy.

It helped me with my philosophy class. Thank you for making it available at no extra cost.

This was purely brilliant. It's highly intellectual academic material. I adore the way it is worded. To any scholar, this kind of stuff is like candy in its own way. Rock On!!!

I first read this more than thirty years ago whilst on a first year undergraduate course which included a module on European Philosophy - along with Aristotle, Kant was the thinker that most attracted me once I’d first experienced his work. This is a great introduction or primer to Immanuel Kant and includes the basis of all his works and the cornerstone on which his thinking was built. Stripping away to the first considerations of moral and ethical contemplation and then rebuilding one step at a time. Kant goes one step back from Socrates and takes two steps forward towards Marx and the 20th Century thinkers.
It needs a little careful work, but it is in total a very accessible and rewarding read - as well as personally enjoyable in stepping back in my reading history to a time when lots and lots of ideas were completely new and really exciting - a feeling that, thankfully, I’ve never lost.

The most crucial work in Kant's moral philosophy (Critiques of Pure and Practical Reason fall under Epistemology), within this volume is Kant's Categorical Imperative, namely to act if you will it to become a Universal Law.
The book begins with an epistemological exploration of what constitutes morality, which can be lost on the listener, but really takes off when Kant examines actions that cannot be Universal Laws, such as fraudulent borrowing or suicide.
This may sound like common sense, but in our day and age where many dispute morality or even responsibility, particularly left-wing progressive thinking, this book serves as a secular case that there can be absolute right and absolute wrong. A much-needed work in our day and age.
The narration by John Lee is excellent, he is quick, sharp and to the point and I cannot conceive of a better voice for conveying Kant's philosophical message.
An absolutely essential philosophical text.