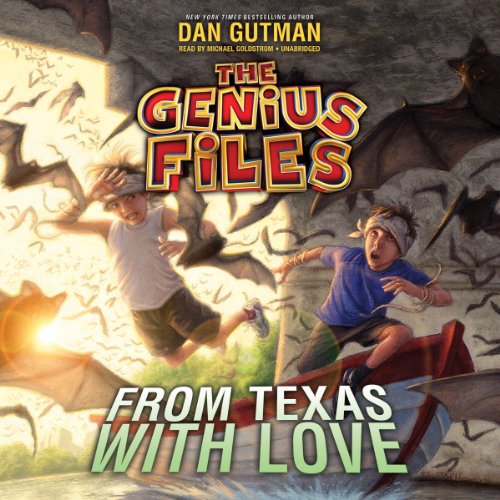 From Texas with Love

The wackiest road trip in history continues in book four of the New York Times best-selling Genius Files series, following twins Coke and Pepsi as they dodge villains and visit weird-but-true landmarks from Texas all the way to Roswell, New Mexico. With the real-kid humor that has earned him millions of fans around the world, and featuring all-new weird-but-true locations around America, From Texas with Love is absolutely batty!

After their explosive escape at Graceland, twins Coke and Pepsi are ready to resume their trip across America - only now in a convertible instead of the RV. They travel through Arkansas and Oklahoma, visiting weird-but-true tourist stops along the way, and finally end up in Texas, home of the Weird Capital of the Country: Austin. The twins' many enemies - the bowler dudes, Mrs. Higgins, and Dr. Warsaw - all swear they're done chasing Coke and Pepsi for good. But when the twins start receiving more codes and ciphers from a mysterious robotic voice, they know someone's after them. They just have to figure out who before the mystery villain finds them first.

How I love the Genius Files

1. The narrator is ver good and funny. He speaks with energy and power.

2. The story is very interesting. It has mysteries and adventures.

3. I was left on a cliff hanger and that made me want to listen to more!

4. I love the characters because they are both realistic and unrealistic at the same time. Pep and Coke are twins. They get into fights with each other, but they are always on the same side..

more of the same

This was more of the same thing as the previous books. I know they're written for kids and repetition is common, but reusing almost entire conversations? Ugh.

Very funny and pretty educational. It’s a good book with a good reader, although the last book in the series requires a credit. Just something’s to consider!

Awesome, just enough fun & excitement to make one go and seek out the next book. Keep the Knowledge rolling in the series. Thank you.

Aliens???????????{‘o’} This is getting weird onto the next book Wait are coke Pepsi Get assassin from space?

i have some questions for you😁 other wise great

its great! i loved it,now off to what i said in the title have questions👌 ok firstly why would they bowl if they were tired well thats my only question

I love this series! They are just WOW people! Coke and Pepsi are...pretty challenged twines! Ya’ll will LOVE this series!

Everything is just amazing how the characters have so much personality.
Keep on writing I would love to see more books! Keep writing. Keep trying. And know you are loved ;p

I loved it, I struggled to finish it.

As always, these audibles have been amazing!!! We’ve really enjoyed listening to them!! Off to download the next one!!!!