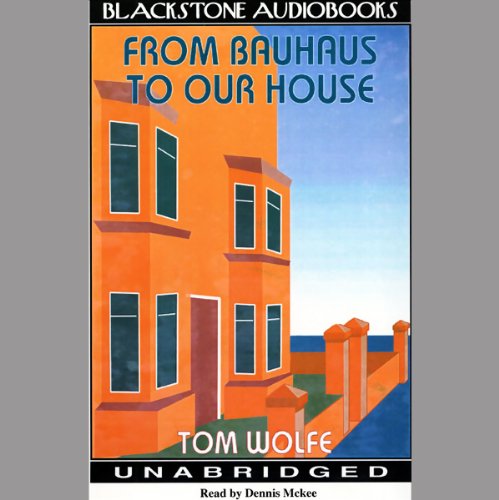 From Bauhaus to Our House

In Tom Wolfe's hands, the strange saga of American architecture in the 20th century makes for both high comedy and intellectual excitement. This is his sequel to The Painted Word, the book that caused such a furor in the art world five years before. Once again Wolfe shows how social and intellectual fashions have determined aesthetic form in our time and how willingly the creators have abandoned personal vision and originality in order to work a la mode.
©1981 by Tom Wolfe (P)1998 by Blackstone Audiobooks
Classici Narrativa letteraria Architettura
Mostra di più Mostra meno

Cosa pensano gli ascoltatori di From Bauhaus to Our House

So snarky I kept having to back up and repeat

This book is so deliciously biting and sarcastic I kept having to back up and listen to almost every sentence again to be sure I got all the snark. Every word is perfectly crafted with (in most cases) a lot of well-deserved sneers. I do not share quite his level of derision in every case but I love it when someone is bold enough to skewer some sacred cows no one else dares to skewer. If you like this one, another similar book is "The Painted Word" (also by Wolfe) and "Art's Prospect" by Roger Kimball. I have a friend who loves and respects Frank Lloyd Wright and I had to stop reading and email him about Bauhaus to Our House because of how it praises Wright and links Wright to other indigenous American art forms and movements that lost their place in the sun too soon. That said, I don't absolutely hate minimalism. But it sure is fun to hear some sacred cows get a grilling.

No reflection on the book, but I just wasn't in the mood for this. The narrator did not do Tom Wolfe justice. He is a clever writer, but the cleverness was missing in this book due in large part to the uninspired narration. I will most likely listen to it again in the future but for now I'm just not getting it.

The reading was below average.

and the editing was terrible; different levels, different closeness to the mic, even in the middle of a paragraph.
The book is good. I finished reading it on Kindle. Reading the Kingdom of Speech now.

narrator is NOT good

minimal effort put into the production of this. if you can get past that, Wolfe’s story is fantastic.

Would you try another book from Tom Wolfe and/or Dennis McKee?

I love TW, but this did not resonate with me at all.

Would you ever listen to anything by Tom Wolfe again?

Sure. This is an outlier.

Who would you have cast as narrator instead of Dennis McKee?

If you could play editor, what scene or scenes would you have cut from From Bauhaus to Our House?

Most of them. The book is too much 'inside architecture'. Who are the professors, the rumors, the infighting, etc. That stuff just isn't interesting to me.. faculty politics and whatnot. Dreadfully boring.

Discussions about what the designers were trying to achieve, and technical / engineering issues involved in achieving them.

This was a nice review of certain early to mid-century architectural style(s) and theory.
If you need to freshen your memory of things learned in Art History 101, this is the ticket in the architectural field.

What could Tom Wolfe have done to make this a more enjoyable book for you?

Mr. Wolfe did what he proposed. That being an articulation of just how the minimalist idea in the architectural canon evolved.

Did Dennis McKee do a good job differentiating all the characters? How?

Well, no characters here, but Mr. McKee did a nice job reading the text.

Could you see From Bauhaus to Our House being made into a movie or a TV series? Who should the stars be?

(Ah HA!! I see that Audible needs to apply some editing their questions when reviewing nonfiction! This is an essay, pretty much, not a fictionalized account of architectural stylizers.)

If Mr. Wolfe wanted to have a movie made of the evolution of intellectualization of the human habitat from dirt floors and burlap curtains to the glass box of the 20th century, he could introduce into a work of fiction an immortal who lives on one square acre of ground for about 12,000 years and has to undergo a thousand renovations of his habitat.

Anyone who has ever been inflicted with of a renovation of the tiniest kitchen or a measly bathroom knows that this leads to madness. So, instead of a vampire or wolf-human that lives forever, we could have, as our protagonist, a common man driven insane not only by the intellectuals who dictate fashion at the expense of comfort but also a man driven to suicide by the endless torture of construction never finished. Sort of like what happens in any actual renovation.

Of course, being immortal, the man cannot chose to end his suffering at his own hand because, well, he's immortal and must endure until he is finally encased in a glassy, soulless, boxed tower .

Brilliant and Incisive Satire. Wolfe at his Best!

If you want to understand why so many modernh new buildings in our cities are hard on the eyes as well as the spirit, Tom Wolfe is your man!
Wolfe eviscerates the pompous and arrogant class of modern architects, and makes you laugh out loud as he does it.

40 years later, this book is still a dazzling display of Wolfe’s style. Why, he asks, are we surrounded by so much architecture most of us hate? What happened to the human scale, craft, warmth, variety, decoration and life we actually crave? Wolfe has a thesis and it makes for a well-told story.

The narration is flat but adequate. For that reason I’d recommend a print copy of the book more highly than this recording — but don’t let that stop you from listening if interested.

An important caveat. Some of Wolfe's argument and emphasis was fiercely disputed or simply dismissed by the architectural profession — or at least may not be as simple as the story that’s told. And that’s OK, because this book will get you interested in learning more in a way that other starting points might not. For balance, look up some reviews of the book online to read criticisms of the history Wolfe presents.

This is an entertaining and illuminating account of how piety fueled nonsense comes to dominate a professional community (architecture); a sad story that plays itself out again and again in other arts, academic disciplines and professional communities. I don’t agree with all of his analyses (especially his take on American philosophy in the 1970’s, but that is just a few paragraphs and does apply in a narrow range of cases). What is a bigger deal is how the reader misrepresents the author’s voice. Tom Wolfe is exuberant; this reader is flat and measured, as if trying to turn the author into an academic. So there is a continual and distracting tension (for me at least) between what is said and how it is said. Still, I listened to the end and felt well rewarded. It’s that good a book.

If you have interest in Architecture in 2018, you should read this book (in physical form)

The last time I read this was when it was brand new (1981) and was his (Tom Wolfe’s) followed to the “Right Stuff” and sort of derived from his previous book “The Painted Word”, about modern art. He made the correct turn, just after this IMHO. Big fat novels that are character studies. As a representative of the “New Journalism” style Wolfe is is neck and neck with John McPhee (which is better is only dependent on what you, the reader, is most interested in.). The narrator was clear, but didn’t do the source material justice. He couldn’t, because the book is short (with pictures) for a reason. This is a short genius book. I’m glad to have re-read it. And it is impossible to beat the last line.

Amusing and fun to listen to.

I really enjoyed listening to Tom Wolfe’s take down of the American architecture’s avant garde. The narration was okay but it was spoiled by the variable sound quality.