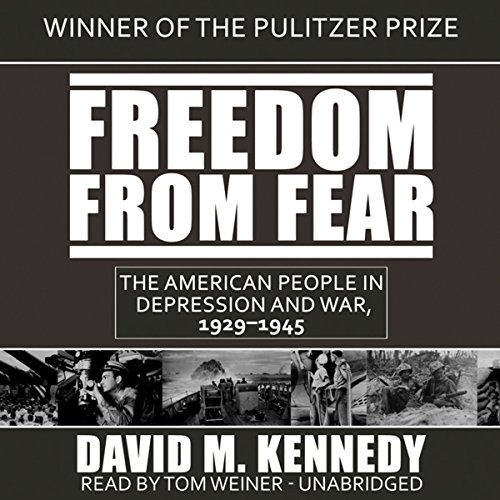 Between 1929 and 1945, two great travails were visited upon the American people: the Great Depression and World War II. This Pulitzer Prize-winning history tells the story of how Americans endured, and eventually prevailed, in the face of those unprecedented calamities.

The Depression was both a disaster and an opportunity. As David Kennedy vividly demonstrates, the economic crisis of the 1930s was far more than a simple reaction to the alleged excesses of the 1920s. For more than a century before 1929, America's unbridled industrial revolution had gyrated through repeated boom-and-bust cycles, wastefully consuming capital and inflicting untold misery on city and countryside alike.

Freedom from Fear explores how the nation agonized over its role in World War II, how it fought the war, why the United States won, and why the consequences of victory were sometimes sweet, sometimes ironic. In a compelling narrative, Kennedy analyzes the determinants of American strategy, the painful choices faced by commanders and statesmen, and the agonies inflicted on the millions of ordinary Americans who were compelled to swallow their fears and face battle as best they could.

Both comprehensive and colorful, this account of the most convulsive period in American history, excepting only the Civil War, reveals a period that formed the crucible in which modern America was formed.

Please note: The individual volumes of the series have not been published in historical order. Freedom from Fear is number IX in The Oxford History of the United States.

“This is the kind of book prizes are made for.” ( Chicago Tribune)
“[Traces] the American people through three of the most important and widely written about epochs in the century…and provides us with consistently original and sometimes startling conclusions.” ( Washington Post)

Good summary of a pivotal time.

While not very deep, this book presents a balanced overview of the Roosevelt presidency and provides a good jumping off point for those (like myself) who are interested in exploring selected topics from this era in greater detail. "Freedom from Fear" provides a balanced view of FDR, citing his accomplishments, but not sugar coating the mistakes and personal flaws of this most controversial figure.

As good as it gets. Well read with a quick pace, the book moves quickly painting a panoramic view of these years, scanning across the US as well as its relationship to the rest of the world. Very rapidly paced, well research, outstandingly read and presented. A great part of the Oxford history series. highly recommended.

This is an impressive work of scholarship, ranging across many different facets of the Depression and World War II and doing it so well that it is easy to see why it won the Pulitzer. I learned so much about the roots of our own time that I want to order the hard copy and reread substantial sections to reflect more on what Kennedy has to say. And Tom Weiner's reading is perfect.

Not what you learned in high school

If you could sum up Freedom from Fear in three words, what would they be?

Tom had to read a lot. His voice did not get tiring. He pronounced words very well.

This is 32 hours of audio, a real bargain in cost per minute terms! I really want to listen to it again! You will learn a lot about this era and it is delivered rapidly.

Loved this book. The book was so interesting and so informative. This should be required reading in High School history classes. History for me in school was one long boring line of events that meant nothing. The only thing I remembered about the Depression was there was no food and farmers poured milk in the street. This makes the years covered come alive. You understand what happened and you can see the exact same events unfolding today. Reading this you find out where many of the stereotypes about people came from. The book educates the reader not by just dates and events but by letting you see into the lives of the people at the time and how they perceived the government and their lives. Never wanted to stop listening to this book..

The author took on a daunting task here, writing about not one but two of the most important and complex periods in American history. Plus, it's not like the two periods meld seamlessly into each other. The author covered an economic/social crisis in the first half of the book, and then covered the biggest war in the history of the world in the second half. Kennedy covers both very well.

This is an extremely detailed book. Kennedy does a spectacular job with facts and numbers on the Great Depression.

Early on he covers the debate concerning the famous stock market crash's impact on the general depression. This section is quite enlightening and should make many open minded listeners reconsider the issue.

Kennedy will certainly have many readers questioning their views of Herbert Hoover. One gets the sense that Hoover was to some extent a victim of circumstance. Some of the most interesting parts of this book concern the political interactions between Hoover and incoming president Franklin Roosevelt.

I wouldn’t say that Kennedy portrays Hoover as a sympathetic character, but he does not bury him as a villain by any means. Kennedy also pours cold water on the image of FDR as the hero who saved the country from Hoover. The book certainly carries on the now familiar refrain amongst scholars that the New Deal was in large part as futile as anything Hoover did.

The first 12 chapters of the book cover the Stock Market Crash, the Great Depression, and the New Deal. Kennedy must then transition to WWII and does an amazing job of bridging 1918 to 1939 in a relatively short space.

The author does great work on the politics between the Allies. A lot of great info on that. Also a lot of good info on the formations and makeup of the USA armed forces.

Towards the end, the book wraps up in a hurry. The reader may be surprised by the abruptness of this. However, Kennedy does a pretty decent job with the epilogue, covering both the world and the country.

I feel compelled to add that towards the very end the author does unfurl a fairly ruthless diatribe against the actions of America during the war. There is without a doubt plenty of merit in Kennedy’s statements but it’s a bit over-the-top in its harshness. All things considered, credit due to the author for hiding his feelings on the matter throughout the narrative up to this point.

In other words, it's as if hearing another narrator read the same work would make it an entirely different book. Only a select few narrators have the talent/voice to do this. Grover Gardner and Nadia May come to mind as some of the readers that fit this elite description.

If this ultimate goal cannot be reached, the next highest achievement is to wholly convince the listener that the voice of narration holds the convictions as strongly as the author, and is as well versed and knowledgeable on the subject as the author. Natural talent isn't quite as important here. This is an easier level to achieve, but still difficult.

Tom Weiner fits into this second category. He is a terrific narrator and perfect for this sort of book. His voice is pleasant and also authoritative. He is a great fit for books on war/politics/history.

“Verbal typos” and mispronunciations can take away from a narrator’s performance. Depending on the frequency of these mistakes, they can destroy any chance of a narrator convincing the listener. I will say Weiner has a few curious pronunciations during his performance which are distracting, and this surprised me. Some examples of this: “debacle” pronounced as “de-ba-cle” rather than “de-bah-cle;” “clique” as “cleck” rather than “cleeck;” “reprise” as “re-preeze” rather than “re-prize;” “Carnegie” as “car-nay-gee” rather than “car-ne-gee.”

Fortunately, these slight issues are few and far between. Overall, Weiner nails the narration.

Well done, But a little off target

There was too much emphasis on statistics and Franklin Delano Roosevelt in this book for my taste. I wanted to hear what the times were like in the words of people who lived through them.The author chose to portray the select circle of the movers and shakers. The book that was written was well done. The writing had a good flow and there were many interesting details about events and people. The author went out of his way to give Herbert Hoover credit for being a good President who was overwhelmed by circumstances. Many of the issues of the times were set forth well.It was made clear that Roosevelt suffered a long term loss in prestige when he proposed the court packing plan. I have enjoyed the Oxford series and several are outstanding books. I didn't think this was one of the best but it is a well written and thoroughly researched work of history. The narrator was competent, not particularly good or bad.

Well Worth the Credit and the Time!

"Freedom from Fear: The American People in Depression and War 1929-1945" answers my questions, from the American perspective: although the characters were fictional, the places and facts were true.

That's not to say that David M. Kennedy needs any assistance from the very capable Herman Wouk - he doesn't. Mr. Kennedy delves into a 16 year period that changed the United States in a crucial way. That period is only equalled by the American Revolution and the Civil War. In each case, the outcome determined the path of a nation.

Kennedy's description of macroeconomics (the economic relationship between nations) is especially adept. The exploration of the measures taken to relieve the dire economic straights the US was in at the time is clear. I can't say it was concise, because the actions themselves were not concise. "The New Deal" was a brave plan, but sub\bject to extensive political wrangling that finally collapsed during WWII.

I also found the discussion of the use of nuclear bombs against Japan fascinating. Having read John Hersey's "Hiroshima" more than a quarter century ago, I had longed believed that the Enola Gay's successful mission was as inexplicable as it was inexcusable. The use of such a horrific weapon is, after its use, grotesque and cruel - but not there was a reason for it.

I definitely recommend this book.

I have one criticism of the performance, and it's one I've never had of an Audible book before. The narration was faster than any other book I've listened to, and I would have like to have it about 15% slower. Of course, that would have made a 31 hour book into a 37 hour book.

Would you listen to Freedom from Fear again? Why?

Yes, because there is so much detail it will bear a second listen.

Franklin Delano Roosevelt, the dominant politician of that era.

This ia an excellent volume of the Oxford History of the United States.

A very enjoyable listen by a first-rate historian

A very good book overall, definitely worth listening to and reading. I would have liked more on the people of the US at home during the war years, which I feel was given insufficient attention as the book focuses heavily on the conduct of the war.

The performance was pleasant and enjoyable. However, Weiner consistently mispronounces a number of German words, especially the name of Admiral Karl Dönitz, as he fails to pronounce the umlaut correctly.

Read with gravitas by Weiner. This is history at its best. Recommended for those who want to understand this important phase of the changing face of the US.