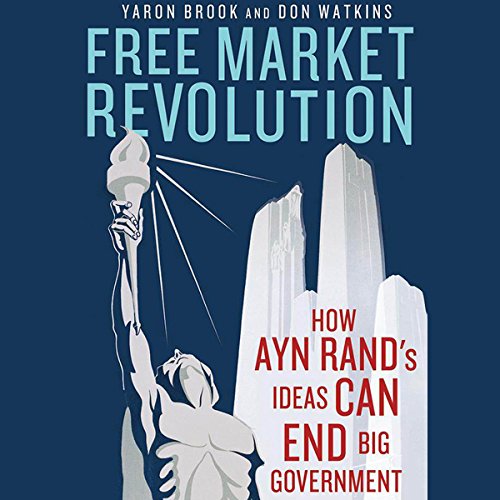 Here is a look at how our current economic crises are caused by too much government—and how Ayn Rand’s bold defense of free markets can help us change course.

The rise of the Tea Party and the 2010 election results revealed that tens of millions of Americans are alarmed by big government but skeptical that anything can or will be done to stop the growth of the state. In Free Market Revolution, the keepers of Ayn Rand’s legacy argue that the answer lies in Rand’s pioneering philosophy of capitalism and self-interest—a philosophy that more and more people are turning to for answers. In the past few years, Rand’s works have surged to new peaks of popularity, as politicians like Paul Ryan, media figures like John Stossel, and businessmen like John Mackey routinely name her as one of their chief influences. Here, Brook and Watkins explain how her ideas can solve a host of political and economic ills, including the debt crisis, inflation, overregulation, and the growing welfare state. And most importantly, they show how Rand’s philosophy can enable defenders of the free market to seize the moral high ground in the fight to limit government. This is a fresh and urgent look at the ideas of one of the most controversial figures in modern history—ideas that may prove the only hope for the future.

©2012 Ayn Rand Institute (P)2012 Blackstone Audio, Inc.
Scienze politiche Politica pubblica Politica e governo Economia
Mostra di più Mostra meno
“A powerful and unapologetic case in support of capitalism. For those who think more government will solve our nation’s problems,  Free Market Revolution will open your eyes. For those who can already see the light, it will sharpen your vision.” (Peter Schiff, CEO of Euro Pacific Capital and  New York Times best-selling author)
“ Free Market Revolution is must-reading for an age in which the government seems to be treating Atlas Shrugged not as a warning, but as a how-to manual.” (Glenn Reynolds)
“In this lengthy but digestible tome, Brook and Watkins, of the Ayn Rand Institute, tackle the 2008 housing crisis, subsequent Wall Street crash, Bernie Madoff, and the healthcare industry through the lens of Rand’s principles…The book challenges existing value judgments of self-interest, self-sacrifice, and the morality of business people, deeming them not selfish but heroic, saving less intellectually skilled workers from ‘starv[ing] in hopeless ineptitude.’” ( Publishers Weekly)

Mr. Brook has also listed examples of modern-day situations where the US government is doing the wrong thing and the economy is suffering as a result. The Democrats and Republicans are both at fault.

I enjoyed the style and content of the book. My only criticism (and this goes for Rand's books as well) is that Objectivists are dreaming if they think typical voters with low levels of intelligence will read a book like this and change how they vote.

Can't say how educational this book was. Made me reconsider many long held "truths" that really aren't! Everyone should have to read or listen to this!

Should be required reading for senior high American Government students. Turns the whole notion of Nanny state politics on its head...right where it belongs! It raises dozens of important questions, not the least of which as how any Americans ever managed anything a 100 years ago without all these bureaucrats!!

The philosophy, not the woman...

If you could sum up Free Market Revolution in three words, what would they be?

An insightful, informative and persuasive treatment of many of the philosophies of Ayn Rand, the Tea Party and Libertarian ideals and how they relate to modern times in America. No, its not a biography of the woman or certain movements and what some consider their flaws. Some really dislike Ms Rand et al, but, many do not like MLK and some of his questionable personal behavior, but still rightly embrace the message. This book speaks to the message.

What other book might you compare Free Market Revolution to and why?

None that are as on point as this one.

Have you listened to any of Tom Weiner’s other performances before? How does this one compare?

Finally getting it right

(I am not the Dr. I am her assistant) Yes. Excellent job of presenting a complex subject to both a lay audience and a reader having a professional interest in the subject.

Its explains in depth how a free market system is the best economic system ever created, If you have any doubts about the statement above then read the book :)

The Truth about Capitalism!

Every citizen of the world should read this book. It will make you see why The United States was called the "Land of the Free". Clearly and simply it teaches the reader what free-market capitalism is all about, and why it is the best system possible.
If you feel confused about why the economy of the world is in such turmoil, then this book will make you understand.

I cannot recommend purchase of this product. It asserts cause and effect relationships among a set of facts, but fails to demonstrate causality. Any person can name facts, say A and B, then assert that A caused B because of belief C. But if there is no demonstrated, belief-stimulated action upon A to yield B, then the mere assertion is nothing more than the person's wishful thinking, an unfounded hope or dream. The authors choose to believe in logic alone. They should merely ask Elon Musk for a ticket aboard the first ship to planet Vulcan and make all our lives better with the departure. Bon Voyage!

This book could save America

Lays out a plan to fix America economic issues

It is all based in facts

I think this book would make a good documentary like Milton Freedman's free to choose.

This might be the most important book to defend capitalism ever published. Seriously. If not ever, then definitely of the last decade. It shows why true free markets, or laissez faire capitalism, is the only system to not only be politically and economically sustainable, but is the purest in it's morality as well.

It really breaks down governments short comings, and how it's policies and interference with the free market has lead to where we are today.

Breaking down the over regulated banking institutions, and how those regulations lead to the collapse of those institutions and the bailouts that occurred thereafter.

The moral defense of what Rand called "rational selfishness" in compared to altruism that is rampant in our society (the idea that you are your brother's keeper). Really opened my eyes to some new ways of thinking.

A brilliant insight into the free market

Excellent book. My knowledge of Capitalism and the free market have now increased dramatically thanks to this book.