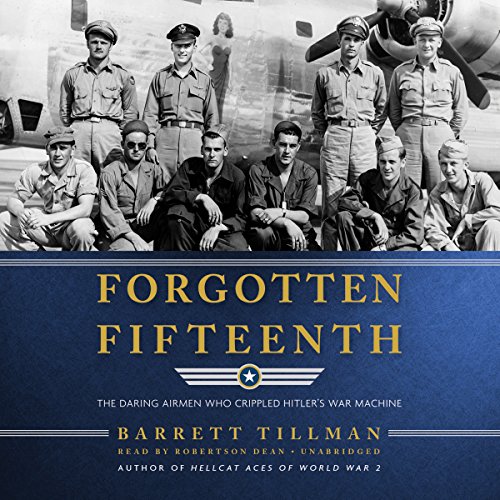 November 1943 to May 1945. The US Army Air Forces waged an unprecedentedly dogged and violent campaign against Hitler's vital oil production and industrial plants on theThird Reich's southern flank. Flying from southern Italy, far from the limelight enjoyed by the Eighth Air Force in England, the Fifteenth Air Force engaged in high-risk missions spanning most of the European continent. The story of the Fifteenth Air Force deserves a prideful place in the annals of American gallantry.

In Forgotten Fifteenth, Barrett Tillman brings into focus a seldom-seen multinational cast of characters, including pilots from Axis nations Romania, Hungary, and Bulgaria and many more remarkable individuals. They were the first generation of fliers - few of them professionals - to conduct a strategic bombing campaign against a major industrial nation. They suffered steady attrition and occasionally spectacular losses. In so doing, they contributed to the end of the most destructive war in history.

Forgotten Fifteenth is the first-ever detailed account of the Fifteenth Air Force in World War II and the brave men that history has abandoned. This book is a must-read for military history enthusiasts, veterans, and current servicemen and their families.

I had no idea of the massive numbers of POWs that we’re involved in this theater of war! The author did a great job in the epilogue presenting the total numbers and percentages of people lost in wounded and the percentage of planes that never made it through was just astronomical versus the very poor performance of accuracy of the bombs dropped. After listening to this it is clear that modern society has absolutely no idea what stress and sacrifice is!

Great history of a largely ignored Theatre and Air Force of WWII. That being said, this is a more academic style book but still worth reading and learning of the exploits of the Fortgotten Fifteenth.

A good overview of the Fifteenth. It is not as detailed as many books on the Eighth. However in fairness, there is less material available for an author who writes about the Fifteenth. The author put to rest some of the mythology surrounding the Tuskegee Airmen. Post-war, many of those who served continued in reputable, worthwhile careers in the military and in the civilian sector. Unfortunately, a few became politicians (George McGovern, Lloyd Bentsen). All things considered, it was a good book.

Would you listen to Forgotten Fifteenth again? Why?

No characters. The story is of the 15th.

Have you listened to any of Robertson Dean’s other performances before? How does this one compare?

The 8th gets all the pub!

I enjoyed the story but it was kinda like reading the logs for each flight, plodding along with just enough information to call it a book. Worth the read in spots. Narration was about the same, plodding and kinda dull.

A riveting account of a forgotten theater. Narration was great! This was one of those books that you could listen to all day long.

History - It continues to Amaze!

Narration is clear, engaging, and complements nicely the subject matter.

We already know of the Eighth’s giant contribution to WW2 victory. This excellent audio explains in detail the Fifteenth’s equally as important contribution.

It covers a little bit of everything about the 15th, but reads more like a history text book instead of a thrilling novel. Not much in the way of great stories, more like important information with a few footnotes about various people or events.

A great story of the air war

A great story. I was a youngster during that war and everything that went on especially in the air war we followed most of the data. Western New York had two airplane factories Curtis and Bell and these were our heroes and it’s nice to read a story about them now.

A solid, informative book covering the Fifteenth airforce. A good overview of the organisation as a whole but it would have been good to hear more details of the missions and men. Whilst there were some more detailed analysis of some missions and "life stories" from those who were there it did start to feel slightly repetitive at times when these details were missed out.

The narrator put in a solid performance but I feel that the book could have benefited from a more passionate, unbiased, individual.

I feel that it was definitely worth a listen as I did expand my knowledge of the Fifteenth airforce but unlike some audiobooks which I have loved it will get a second listen but probably not for quite some time.