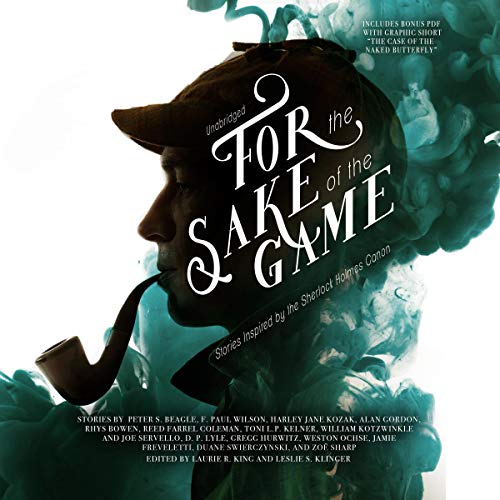 For the Sake of the Game

For the Sake of the Game is the latest volume in the award-winning series from New York Times best-selling editors Laurie R. King and Leslie S. Klinger, with stories of Sherlock Holmes, Dr. Watson, and friends in a variety of eras and forms. King and Klinger have a simple formula: Ask some of the world's greatest writers-regardless of genre - to be inspired by the stories of Arthur Conan Doyle.

The results are surprising and joyous. Some tales are pastiches, featuring the recognizable figures of Holmes and Watson; others step away in time or place to describe characters and stories influenced by the Holmes world. Some of the authors spin whimsical tales of fancy; others tell hardcore thrillers or puzzling mysteries. One beloved author writes a song; two others craft a melancholy tale of insectoid analysis.

This is not a volume for listeners who crave a steady diet of stories about Holmes and Watson on Baker Street. Rather, it is for the generations of people who were themselves inspired by the classic tales, and who are prepared to let their imaginations roam freely.

Cosa pensano gli ascoltatori di For the Sake of the Game

I'm usually very picky about stories that feature Sherlock, I listened to this for free with the launch of Audible Plus and I'm glad I gave it a chance.

The description is accurate; this is not a collection of Sherlock and Watson adventures. More like some additional scopes to add to the imagination from many points of view, over many different spans of time and either featuring the main characters or just references to them. I really really enjoyed some of these and will probably buy the collection to keep forever because of them. There were none I disliked but I would have had trouble with some if my expectations were aligned with anticipation for something more traditionally Holmes in every single story.

Overall, great narration, fun stories, a good listen if you are a Sherlock Holmes fan.

Stories were uninteresting and un "Holmes".

There were some fine moments in these stories but as a whole they were uninteresting and very unlike Holmes. Narration was hit and miss. Seeing Laurie R. King's name associated with this book I expected much more.

Enjoyed it a lot

Enjoyed the stories and the interpretations of Holmes. Some of my favorite narrators and a few to look up and hear more from. Great listen

I generally LOVE spin-off Sherlock Holmes “fan fiction”... but this collection of short stories was very very disappointing. I forced myself to listen to the entire collection, hoping things would improve.. but alas it didn’t happen. Don’t waste your credits or time on this one.

A compilation of short stories with a Sherlock Holmes themed. Either in his original era or the present. Some even a rewrite of the original each trying to leverage the Sherlock fame. A few were actually interested and intriguing others were a struggle to listen and one so just had to skip all together because all the author could write was profanity. I’m glad I didn’t pay for this.

I enjoyed these stories. Of course you need to have read the original Conan Doyle first. But these stories give an alternate ending to many of my favorites. I will definitely listen again.

Great listen while gardening and spring cleaning. A bit of fresh air with the bending of the usual Holmes tales. Appreciated the lack of drug storylines - that have become almost central to recent SH books. I got it, I get it - thanks for moving on.

For me, perfect bedtime reading! Stories are concise, smart and imaginative. Obviously written by Holmes fans FOR Holmes fans!

A couple of the stories were mildly interesting. Three narrators did a good job. Mostly not worth your time.

I enjoyed them all except the one that was rather vulgar. I skipped it entirely.

Some good, same bad, and the rest okay

Some good, some bad, and the rest okay - as is generally the case in such an anthology

Ok. Some others are better but some of the stories were interesting

This was sort of OK. Some stories were more interesting then others. Overall, worth the time.

A collection of authors demonstrating their love of Holmes. Few in a classic Holmes style, all with a twist. I rarely enjoy an imitation Holmes but this was a joy.

Weak plots, and some of the performances are quite mediocre

Some performances sound like they’ve been read by Siri.
Plot in the stories and the writing quality is nowhere near the original. Don’t bother with this title, just read/listen to the original Conan Doyle’s stories.

A great compilation for any Sherlock fan!

Really enjoyed this series of books. Some were less Sherlocky than others and some were better than the rest (I’ve even gone on to download other books in their series’), but they’re all worth a listen and they’re really well narrated.
I listened as part of Audible Plus.

A collection of different but interesting stories, some i enjoyed more than others, only for Sherlock fans.

This book was as good as I hoped it would be given who the editors are.