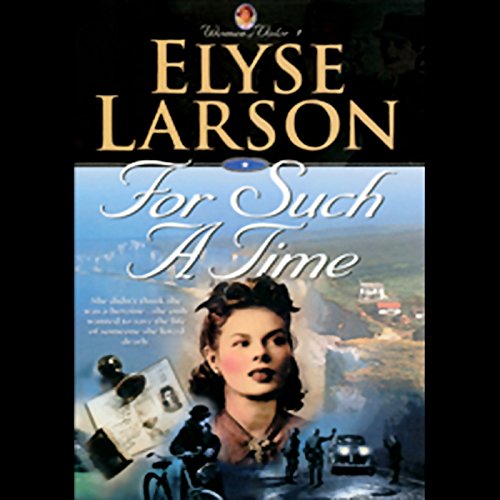 For Such a Time

While the France they have known is crumbling around them, two courageous women face danger and betrayal under Hitler's tyranny.

Giselle Munier and Jean Thornton are more like sisters than cousins, having spent many of their summers together, but with the outbreak of World War II, both women's lives take a dramatic turn.

Jean joins the American Red Cross and is assigned to a military hospital in Wales. Meanwhile, Giselle, active in the French Resistance, has been betrayed and arrested by the Nazis. Though her compatriots are able to rescue and hide her, Giselle remains in grave danger because she knows the identity of other Resistance leaders. Jean is determined to try smuggling Giselle to freedom. While the Allies prepare to invade Europe, she makes intricate plans for a parachute jump into occupied France. For such a plan to succeed, however, both women will need to summon superhuman strength and courage.

"Though the story is fiction, readers will learn much about what European women experienced during World War II." (Church Libraries)

Cosa pensano gli ascoltatori di For Such a Time

listened to the unabridged audio edition of this novel and was very impressed with the smooth introudction to the character of Giselle, her family, and the french resistance. Then, the author inexplicably headhops to some American nurse named Jeanie, her friend Mary in the states, and their lives in the red cross.

At first I thought I could deal with Jeanie, but I ended up disliking the character. She is supposed to be a red cross volunteer and yet she spends most of her time invited to tea and hanging out with her spy family, I thought she wanted to be a nurse? We spend pages of the book listening to Jeanie conspire with her spy friends to become a female spy. I wouldn't mind this, but it all seemed a little rushed and hokey. Also the idea that anyone would send a relative in to rescue a relative seemed extremely unrealistic.

I wanted to read Giselle's story but Jeanie bored me to tears. I also hated how the author transitions between the two. What is the deal with Inspiration writers who feel its impossible to tell a story from a single perspective? Its extremely distract

I love to read, and especially love audiobooks, and am not hard to please, but this book was extremely dull. The characters were flat, and even though what was "happening" to them should have been interesting, it was as if nothing really did happen. It was all so easy and safe, and BORING. Maybe it had something to do with the very slow narration, but really the writing is just flat and sophomoric. I read the entire thing, hoping that something would finally happen, and somehow I did care a tiny tiny bit about the characters, but my main feeling when it was over was of relief. I actually shuddered when I considered reading the next book in the series.

I was so enthralled with this amazing book that I found myself listening to it in my car, late at night, trying to fall asleep, during the day, while I was paying bills, sitting at n the sun. I was consumed. This was a marvelous story. It should be a movie! I recommend it to everyone. I will also say that the acting and the voice and the changes of the different personalities and people were superb. Bravo!

Where does For Such a Time rank among all the audiobooks you’ve listened to so far?

This entire series ranks very highly on my favorites list. They have well thought out plots and well developed characters. I especially like the portrayal of strong female characters in this series.

What other book might you compare For Such a Time to and why?

I guess I would compare it to Code Named Verity because they are both portrayals of women doing their part in WW II in ways other than minding the garden and the kiddies.

What does Vanessa Benjamin bring to the story that you wouldn’t experience if you just read the book?

Benjamin does a great job with conveying the feelings of the different characters as they go through a variety of situations covering the gammut of emotions.

If you could take any character from For Such a Time out to dinner, who would it be and why?

I would like to take Jean out to dinner because she overcomes so much to become a very strong woman who can more than take care of herself.

I strongly recommend this entire series to anyone interested in historical fiction or strong female characters. While each book can stand on its own, and the summaries don't indicate it, they should be read in order because you get a better understanding of the character's motivations and certain plot points.

The book was great. The description was wrong. I did enjoy the book and would recommend it