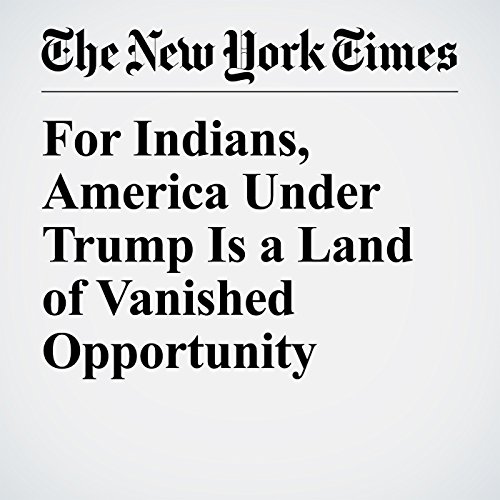 For Indians, America Under Trump Is a Land of Vanished Opportunity

Generations of Indians have admired the United States for almost everything. But many are infuriated and unnerved by what they see as a wave of racist violence under President Donald Trump, souring the United States' allure.

"For Indians, America Under Trump Is a Land of Vanished Opportunity" is from the April 23, 2017 World section of The New York Times. It was written by Geeta Anand and narrated by Keith Sellon-Wright.

They are India Indians not north American indians

These are India Indians not North American indians and I feel President Trump needs to lower the green card and HIV visas from all these countries.

India the country needs to change and stop the Tier system they have, would like to see you as a journalist to tell the truth to Americans of really how the India GOVERNMENT and people are not changing to let poor people of India go to college and how they are treated.

It's all about Americans dont treat the India people but India people treat each other as slaves if u come from a different family,background.

SHOW SOME REAL JOURNALISM STOP THE PROPAGANDA OF OH HOW AMERICA IS SO AWFUL.

SHOW HOW INDIA IN SLAVES THEIR OWN POPULATION OF PEOPLE