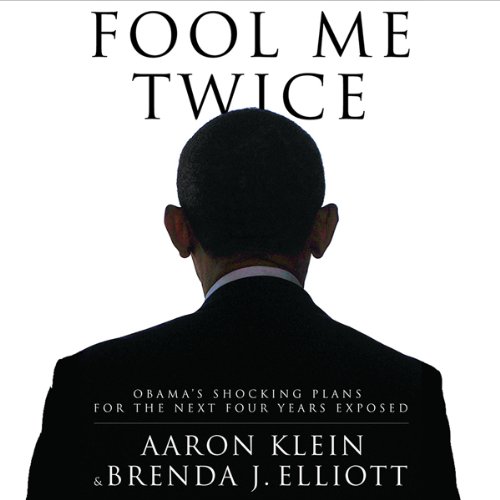 This game-changing book reveals the blueprint for a second term that President Obama and his progressive backers don’t want you to know. Months of painstaking research into thousands of documents have enabled investigative journalists and New York Times best-selling authors Aaron Klein and Brenda J. Elliott to expose the secret template for Obama’s next four years - the one actually created by Obama’s own top advisors and strategists.

A few of the schemes unveiled herein include:

While many have general concerns about Obama’s second-term ambitions, Fool Me Twice lays bare the devastating details of a second Obama presidency. If he wins reelection in 2012, the America of equal opportunity for all, constitutionally limited government, economic freedom, and personal liberty will be but a distant memory.

Aaron Klein is an investigative journalist and Jerusalem bureau chief for WorldNetDaily.com. He is a regular on top American radio shows and appears frequently on Fox News Channel and Al Jazeera. He is the author of Schmoozing with Terrorists and The Late Great State of Israel, as well as the host of Aaron Klein Investigative Radio for New York’s WABC, the largest talk radio station in the United States.

Everyone should read - but few will

Most people have no idea who our current president is. The media has been in awe and they have kept us in the dark. Let us hope that a sufficient number of citizens figure it out before they vote.

Where does Fool Me Twice rank among all the audiobooks you’ve listened to so far?

Maybe the best and most informative

It was one mind blowing information after another. Now I do live in fear for my family and all good decent Americans.

THE most important book 2 listen 2 b4 election!

i had to buy the kindle version too so i could check the references. Very authoritative! Scary! What have we gotten ourselves into? I hope the electorate will get themselves informed rather than voting from emotions as happened last time. And I hope he is stopped from the massive voter fraud that he is trying to use to help hold on to power. I still agree with Martin Luther King Jr's dream that people should be judged by the content of their character rather than the color of their skin. That works both ways. This president is not our friend. He hates America and wants to destroy it. He's gotten lots of help in that and has made a good start. We have to stop him before it's too late.