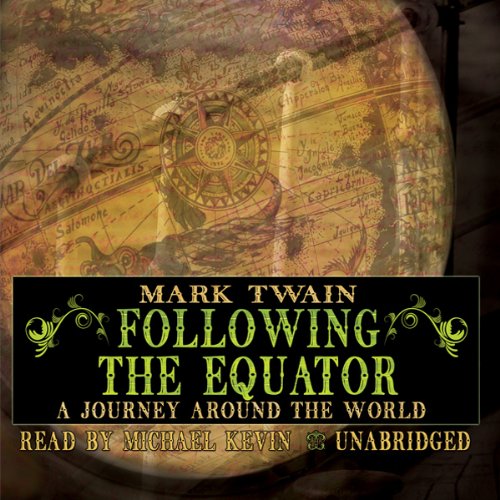 Bound on a lecture trip around the world, Mark Twain turns his keen satiric eye to foreign lands in Following the Equator.

This vivid chronicle of a sea voyage on the Pacific Ocean displays Twain's eye for the unusual, his wide-ranging curiosity, and his delight in embellishing the facts. The personalities of the ship's crew and passengers, the poetry of Australian place-names, the success of women's suffrage in New Zealand, an account of the Sepoy Mutiny, and reflections on the Boer War as an expression of imperialistic morality, among other topics, are the focus of his wry humor and redoubtable powers of observation.

Following the Equator is an evocative and highly unique American portrait of 19-century travel and customs.

Written at a time when Mark Twain was troubled by the recent death of his favorite daughter, severe financial problems, and concerns about his own health, this book is very different from his earlier travel books.It draws heavily on other writers' books, to which Mark Twain adds his own comments. These are often humorous, but humor is not the book's chief attraction.The book offers fascinating descriptions of Australia, New Zealand, British India, and South Africa during the 1890s and is worth reading for that reason alone.

What aspect of Michael Kevin’s performance would you have changed?

In general, Kevin's performance is fine. However, his ability to pronounce unfamiliar names and words breaks down toward the end of the book. How is it possible that a professional reader pronounces "uitlander" oot-land-er? More incredible, he pronounces the simple German name "Beit" (as in English "bite") "bee-it"! His pronunciation of African names is generally shaky, but pronouncing "Matabele" (mah-tah-bay-lay) "MAH-tab-u-lah" is over the top.As one well familiar with that word, I winced painfully every time Kevin botched the pronunciation. Hearing such gaffes once is bad enough, but when they are repeated,they become unbearable.One would think a professional reader would do better.

Could you see Following the Equator being made into a movie or a TV series? Who should the stars be?

No. Why are such questions even being asked here? Is it necessary to dumb down everything on the web?

In the absence of any other recording of FOLLOWING THE EQUATOR, Michael Kevin's version is perfectly acceptable. I'm sure I'll listen to it again some time.

This book is not quite as good as The Innocents Abroad, which is another Twain travel book, but it is nevertheless interesting. Twain as always gives us humor, and he gives us interesting details of life in the places he visits...the callous disregard for the lives of others, casual murder for the thrill of it, is described in detail regarding India, the scene of the awful events.

You will be entertained, and you will be surprised at the way of life in other countries a century ago. And you will hope that some of it has changed since then.

Ticks all the boxes.

A masterpiece from a wonderful storyteller full of great yarns. Reader is perfect!
You can open this book up at virtually any page and listen to an ineresting tale told with wit and intelligence. One of my all time favourite books.

Michael Kevin does a great job narrating Mark Twain's last travel book. Twain had gone bankrupt and needed to go on a world-wide lecture tour to recover financially. Here he recounts the journey to San Francisco, and from there to Hawaii, Australia, New Zealand, India, and South Africa. As usual, he throws in a good bit of history with the kind of local color he had a brilliant eye for. On the whole, though, it's a less interesting effort than some of Twain's other travel books, mainly because he's less visible as a character. (Some people would consider that an advantage, but I missed him.)

A bit of a headache

The narrator's voice was a headache when combined with Twain's writing style. Not again please.

Twain writes about his experiences with a multitude of different cultures and how much he enjoys their differences from America. A must read for any traveler!