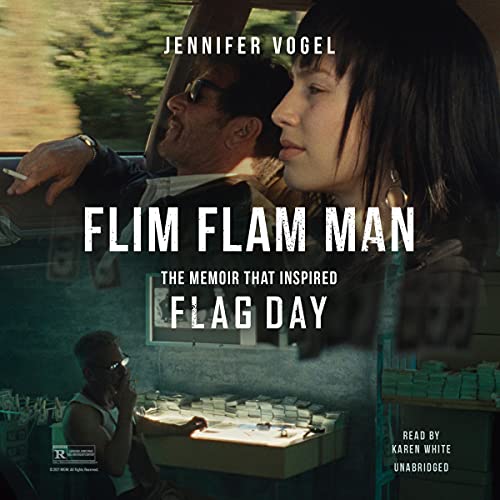 The major motion picture Flag Day starring Sean Penn and his daughter Dylan Penn is based on this father-daughter story of a charming criminal - told by the daughter who loved him.

One frosty winter morning in 1995, Jennifer Vogel opened the newspaper and read that her father had gone on the run. John Vogel, 52, had been arrested for single-handedly counterfeiting nearly $20 million in US currency - the fourth-largest sum ever seized by federal agents - and then had been released pending trial. Though Jennifer hadn’t spoken to her father in more than four years, the police suspected he might turn up at her Minneapolis apartment. She examined the shadows outside her building, and thought she spotted him at the grocery store and the bus stop. He had simply vanished.

Framed around the six months her father eluded authorities, Jennifer’s memoir documents the police chase - stakeouts, lie-detector tests, even a segment on Unsolved Mysteries - and vividly chronicles her tumultuous childhood while examining her father’s legacy.

A lifelong criminal who robbed banks, burned down buildings, scammed investors, and even plotted murder, John Vogel was also a hapless dreamer who wrote a novel, baked lemon meringue pies, and took his 10-year-old daughter to see Rocky in an empty theater on Christmas Eve. When it came time to pass his counterfeit bills, he spent them at Wal-Mart for political reasons.

Culling from memories, photo albums, public documents, and interviews with the handful of people who knew the real John Vogel, this is an intimate and intensely moving psychological portrait of a charismatic, larger-than-life figure - as told by the daughter who nearly followed in his footsteps.

Loved it. Personal, raw, unsentimental yet intimate. I am always fascinated by the complexities of human relationships. I am looking forward to seeing how the movie Flag Day compares.

Loved every second of it!

This story really grabs you. So heartbreaking and heartwarming at the same time. Jennifer's struggles with her family, herself, and most importantly her complicated father, are told with warmth, humor, affection and excruciatingly clear memories. The narration was top notch. highly recommend!