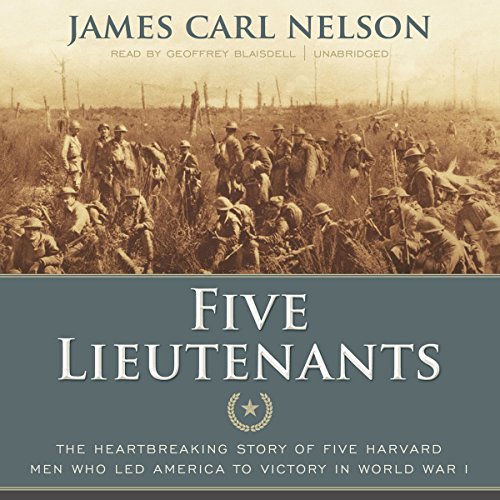 The dramatic true story of five brilliant young soldiers from Harvard, this is a thrilling tale of combat and heroism.

Five Lieutenants tells the story of five young Harvard men who took up the call to arms in the spring of 1917 and met differing fates in the maelstrom of battle on the western front in 1918. Delving deep into the motivations, horrific experiences, and ultimate fates of this Harvard-educated quintet - and by extension, of the brilliant young officer class that left its collegiate and postcollegiate pursuits to enlist in the army and lead America's rough-and-ready doughboys - Five Lieutenants presents a unique, timeless, and fascinating account of citizen soldiers at war and of the price these extraordinary men paid while earnestly giving all they had in an effort to end "the war to end all wars."

Drawing on the subjects' intimate, eloquent, and uncensored letters and memoirs, this is a fascinating microcosm of the American experience in the First World War and of the horrific experiences and hardships faced by the educated class of young men who were relied upon to lead doughboys in the trenches and, ultimately, in open battle.

James Carl Nelson is a journalist who has worked as a staff writer for the Miami Herald. He is a member of the Western Front Association, which is devoted to the study of the Great War. He lives in Eden Prairie, Minnesota.

©2012 James Carl Nelson (P)2012 Blackstone Audio, Inc
"WWI historian and journalist Nelson relates the heroic story of five former Harvard students who became combat leaders, inspiring the infantry 'doughboys' of WWI…. Writing with great knowledge of and sensitivity for his subject, Nelson ensures that the experiences, thoughts and aspirations of the young Harvard men of 1918 are not lost to future generations." ( Publishers Weekly)
"An intimate tracking of officers' perspectives during World War I…This eloquent work of the toll of war builds moving stories through a wealth of personal detail." ( Kirkus Reviews)

This is a non-fiction book about World War 1. I have been reading every thing I can find about WW1 for the past year and a half, from non-fiction, fiction, all the way to poetry and music. This is a newly published book that is well research looking into the lives of five young men that are Harvard grads. Most are master or Phd grads, most are from better off families and probably could have found away to avoid military service. Each had their reasons for going off to War. Nelson researched diaries, uncensored letters and memoirs as well as the usual resources about the war. The story is more about each of the young men rather than a detailed account of the military action. Each became an officer and leds men into battle. Because of their education and sensitivity they saw events a bit different than some of the uneducated men they led. Enjoyed some of the poems that were read in the book. For one studying WW1 this book helps give insight to the individual officer and the effects of the War on them post war. Geoffrey Blaisdell did a good job narrating the story.