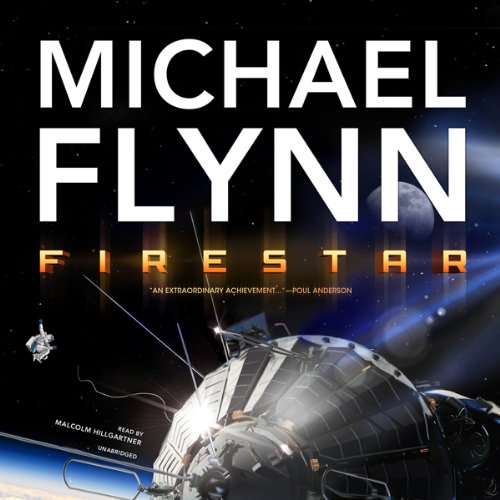 It is the dawn of the 21st century, and America is in trouble. Public schools breed apathy and ignorance, and politics has become the art of the quick fix. There is one woman, though, who has both the vision and the money to leverage change. Mariesa Gorley van Huyten, heiress to one of the great American fortunes, founds an educational subsidiary called Mentor Academies and begins to subcontract public school systems in order to raise a new, less cynical generation. But her clandestine program is much larger than that: it also includes the founding of a private space program, the eventual construction of an orbital power station, and the revival of technological innovation on Earth.

Firestar is a chronicle of private enterprise and individual initiative—the story of one woman’s quest that becomes the focus for a whole new world. Mariesa’s program lets teachers strive to teach, hires astronauts who have no government space program to fly for, and provides productive outlets for the idealistic desires of the rich and powerful—at least those who remain sane enough to have such desires in the face of a crumbling America. And it just might work.

Michael Flynn lives in Easton, Pennsylvania. He is the winner of the Robert A. Heinlein Award and was a Hugo nominee for Eifelheim.

©1996 Michael Flynn (P)2012 Blackstone Audio, Inc
"As Robert A. Heinlein did and all too few have done since, Michael Flynn writes about the near future as if he'd been there and was bringing back reports of what he'd seen. A splendid piece of work." (Harry Turtledove, New York Times best-selling author)
" Firestar is a knockout…. Blurbmeisters, comparing him to Heinlein, may be shorting his talent…. By any measure, this is the best book I've seen this year." ( San Diego Union-Tribune)

Overall I thought this book was wonderful. However, it's not jam packed with action and deals primarily with the dream of space, relationships between people, as well as business and government, which can admittedly get a little dry from time to time. I thought the interplay of characters was well done and in particular I loved Flynn's play of language. For me, it was a delight to listen to.

Would you try another book from Michael Flynn and/or Malcolm Hillgartner?

I think I am done with Michael Flynn. Will do another by Malcolm.

Have you listened to any of Malcolm Hillgartner’s other performances before? How does this one compare?

Do you think Firestar needs a follow-up book? Why or why not?

It was a slow build up book, and the future of the book is very predictable.

Went into this hoping for great Si/Fi, and it turned into a major sweeping drama. I do not mind a little drama, and self introspection, but the book was plagued by enormous amounts of heavy Drama. The intrigue was fun, and the overall concept sound, but it could have been told in a much shorter book, with a much farther in the future outcome.

I found myself growing tired of all the "twists" that were attempted. I had to put the book down and go back to it several times just to make it through, as I like to finish something once I start it.

This novel moves very slowly. VERY slowly. Usually I am prepared to endure slow character and plot development for the greater reward later, and with a long book and long series ahead I didn't mind the aching slowness of Firestar. That was until I realized that it wasn't getting any faster and things weren't getting any better. I couldn't bring myself to go on to the next book in the series because I can only assume it would be the same as Firestar, and I can't endure it again. Things never got going in Firestar. Sure there was plot advancement and character development but it all felt like it was building towards a climax that never came.

The premise itself was unimaginative and a tad implausible. The entire story is based on a girlhood experience of seeing a comet burn up in the sky, inspiring the main character to develop paranoia about asteroid strikes and start a great corporate effort to develop a defense system against asteroid strikes.

The story plods along the long and complicated path towards manned spaceflight missions as part of the grand scheme of developing orbital defenses. What drew me to this story was the space aspect and the science of it was well developed and detailed, however after 30 hours the entire aim of the book is barely reached and I can't abide by an entire book's worth of buildup.

Aside from the space aspect the book carries a detailed and opinionated social commentary on education among other things. At points it sounds more propaganda then a novel, which I suppose is the author's right.

The other big stumbling block for me were the characters who were almost universally unlikable. I don't know whether the author was trying to show the humanity of the characters, or just has no room for a hero or something to identify with. Each character is complex, but retains almost no redeeming qualities.

Once I got the end I just felt like I was left hanging, with no resolution to the plot at all, which typically makes me eager for the next book, but there was nothing in Firestar that made me want to experience more of the same.

The narration was fantastic, but it wasn't enough to redeem the unrelenting boredom of the plot. Usually its the the misfortune of the audiobook listener to endure the the poor narration for the sake of the excellent story, this time it was the other way around and good narration couldn't save this book.

What did you love best about Firestar?

Unbelievably well executed story of humanity beginning to reach for the stars.

Ned is a jock pilot who knows what is truly important.

He makes the characters come alive. I feel like I'm standing in a room with them hearing them speak.

It evokes a feeling that we as humanity can truly do anything. It also is a refreshing look on the modern education system with a true grasp of the problems my generation is creating in the modern work force.

The book is too long and ponderous. There is a little bit of science fiction and a lot of other stuff. I am 3/4 of the way through this book and it feels like it will never end. From my viewpoint because it's not set very far into the future the author gets bogged down into a lot of today's geopolitics and socioeconomic woes that really isn't all that interesting to me.

Mr. Flynn did a much better job with Eifelheim, which is another Audible selection, and a standalone SF novel set in the present.

If you could sum up Firestar in three words, what would they be?

What other book might you compare Firestar to and why?

I consider this whole series as pivotal as Ayn Rand's books.

Which character – as performed by Malcolm Hillgartner – was your favorite?

All of them! They each have specific personalities and all are displayed with equal importance. I love the fact that he draws the pictures, in inflection and timbre, that the author drew.

A MUST READ SERIES! A glance at life. Without being overtly combative. I love this series and Malcolm Hillgartner is a wonderful orator: deep voice, great inflection and good timbre. Enjoy the full series. Michael Flynn shows knowledge of the subject, surrounding consequences, foresight, and I would say, as WDC goes, he gets it!

This was an excellent story with elements from real history and viable might have beens built around a very real possibilty.

Good fleshed out characters and a large scope, makes this book seem 20 hours shorter than it is... and there are sequels :-)

I really wanted this to work.... I listened all the way through.... It was just too drawn out....

this book is gloriously long. it's quite dry and serious, except every now and then, you're side-swiped with some unexpected humour. Enjoy.