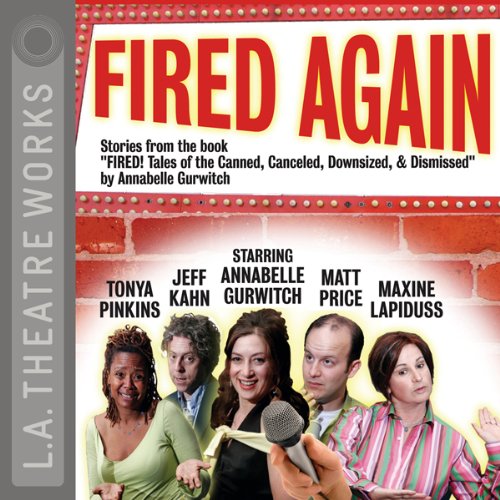 If you spend any time in the workplace, there's a good chance you're eventually going to get laid off, downsized, let go, out-sourced, axed, terminated, cancelled, canned, dismissed... FIRED! Odds are you might even get... FIRED AGAIN!

Annabelle Gurwitch's hugely popular book Fired: Tales of the Canned, Canceled, Downsized, and Dismissed has led to the production of a movie in addition to the best-selling audio-play released by LA Theater Works in 2005. Featuring some of the entertainment industry's most prolific writers and talents, this hilarious follow-up is sure to soothe anyone with wit who has suffered the trauma and humiliation of being fired. Is getting fired the best or worst thing that has happened to you? In this new collection, some of the more talented individuals in the entertainment industry take a stab at that question by sharing their hilarious stories.

At least I am not the only one.

There is no shame in being fired from one or many jobs. Life is a lot better when can laugh at one’s professional Mis-steps. This is performance I recommend listening while on the way to work. This will be the best medicine.

This too follows the adventures of showbiz personnel and their adventures with employment. This seems to have more production value than the first though that may be more of a strength than a weakness as part of the charm of the original was its off the cuff visceral presentation. All in all an entertaining and charming series of tales.