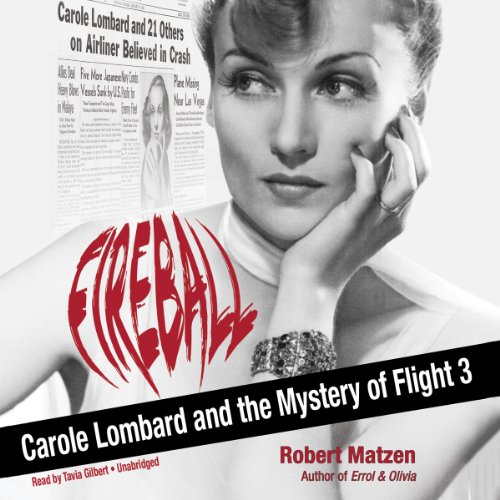 This fresh look at Hollywood's "Queen of Screwball", Carole Lombard, presents a first-ever examination of the events that led to the shocking flight mishap that took her life on the side of a Nevada mountain in 1942. It also provides a day-by-day account of the struggles of Lombard's husband, Clark Gable, and other family, friends, and fans to cope with the tragedy. In effect, having just completed the first sale of war bonds and stamps in the nation following its entry into World War II, Lombard became the first Hollywood star to sacrifice her life in the war.

The War Department offered Gable a funeral service with full military honors, but he refused it, knowing his wife would not approve of such spectacle. Based on extensive research rather than gossip, this investigation further explores the lives of the 21 others on the plane, including 15 members of the US Army Air Corps, and addresses one of the most enduring mysteries of World War II. On a clear night full of stars, with TWA's most experienced pilot at the controls of a 10-month-old aircraft under the power of two fully functioning engines, why did the flight crash into that Nevada mountainside?

This gripping page-turner presents the story of the people on the plane, the friends and families left behind, and the heroic first responders who struggled up a mountain hoping to perform a miracle rescue. It is a story of accomplishment, bravery, sacrifice, and loss.

If you could sum up Fireball in three words, what would they be?

What does Tavia Gilbert bring to the story that you wouldn’t experience if you just read the book?

Ms.Gilbert does read with enthusiasm.

I appreciated that Mr. Matzen fleshed out some peripheral players in the lives of Lombard and also Gable.

I've always felt I knew Carole; now I feel I know her better.

This a fantastic book! I have always wondered about the crash of TWA Flight 3 and this book answers those questions. While the focus is on Carole Lombard the other crash victims are not forgotten. My only complaint is the narration. Oh my. It is read in an over the top, melodramatic manner to the point of being annoying. If the story had not held my interest so deeply I would have returned it because of the narration and bought the hard copy. Overall, well written and a tribute to the lives of those affected by this tragedy.

Hard to believe so long has passed and how touching this story. I really would have loved to get to know the"fireball" Carol Lombard. She really packed a lot of living into a short time!

I'm a big fan of Carole Lombard and I'd read this in hardcover when it first came out and thought that it was very good. I still think that it's very well written AND now I also feel that the narrator made it even better. She read it with the proper amount and placement of emotion (not overly, but not flat either).

This is not just about Carole Lombard though, it's about her mother and Otto Winkler, and the service men and flight crew all of whom also died in that crash.

It's a great reminder (I think anyway) to lead a good life, love and appreciate your loved ones, have good fun..and don't make important decisions based on emotion...and listen to other people who also have a part in your decision making and understand their feelings.

Wonderful story that answers multiple questions. But the narration almost kills the book. Her voice is lovely, but tone down the drama, please! I wasn’t impressed by the over the top hysterics. It made listening difficult. Otherwise perfect voice for narration.

Very good and interesting; read the book a few years ago and just listened to it; very good!!

This book has reignited my interest in Clark and Carole. It was heartbreaking to read about their love story and how it ended in detail. The book brought them back to life and made them more real than anything else I’ve read about them. It could also be that my interest in them started when I was a young teenager and reading about them back them was different than reading about them now, aged 57. Quite a different perspective. I also liked that the other passengers’ stories were told. All in all it brought the tragic crash to life and my heart ached for all involved.

enjoyed learning what happened to the king & queen. finding love and losing it.. love

Compelling narrative that kept my attention the entire time. The description of the crash scene investigation went on a bit longer than I would have preferred. But the only real criticism I have is the narrator’s inflection is overdone and too dramatic, lending an unsophisticated and annoying quality to the audiobook. But overall it was a good listen, particularly the relationship between Lombard, Gable, and their friends.

This was probably the most beautifully written tragic story I've ever read. I think it would have fared even better with a better Narrator. Tavia what's her face is no Grace Conlin and her over the top dramatic recitation bordered on obnoxious "oooh no! Dear! sweet! Carole is... G-g-g-ONE!!" (Rolls eyes) the story was tragic enough and did not need Tavia's over the top Mary Pickford style of acting.

Anyway I wish I had read the book on my own because I don't think I will be able to revisit this title. It was just too heartbreaking, those people did not deserve to die in such a tragic way. Oh well I pray they are all at peace.

Off to find something cheery to read to...