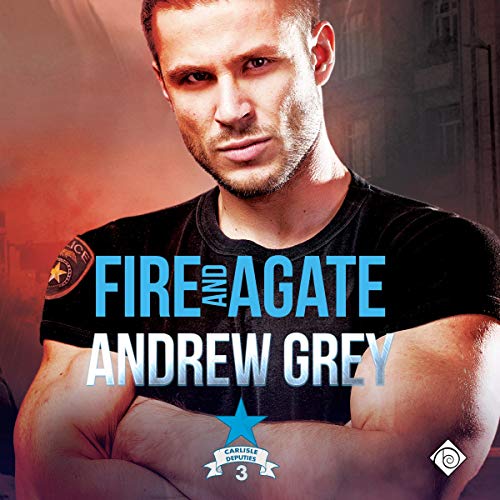 When Chris Anducci is moved off jail duty and into the sheriff’s office, he doesn’t expect his first assignment to be protecting a witness against a human-trafficking ring. Knowing the new sheriff doesn’t abide screwups, Chris reluctantly agrees to work the case.

Pavle Kasun has spent the last four years of his life at the mercy of others. When an opportunity presented itself, he took it, resulting in his rescue. Now, the safe houses he’s placed in are being threatened, and he needs protection if he is to have any sort of chance at a life.

Chris opens his home to Pavle, but he doesn’t expect Pavle and his story to get under his skin...and stay there. Soon, they discover they have more in common than either of them thought. Slowly, Pavle comes out of his shell, and Chris finds someone who touches his heart. But as the men looking for Pavle close in, they will stop at nothing to get him out of the way. Even if Chris can keep him safe, he might not be able to protect his heart if Pavle moves back home.

Story had some issues, but Tremblay was awesome!

I'm of two minds about this story. On the one hand I really enjoyed it - I mean it would take a hell of a lot for me to not enjoy something that Tremblay narrates. The story as a whole was a good one and the characters likable. But on the other hand the romance didn't work for me.

Chris Anducci was recently promoted from jail duty to the sheriff's office - something he was very happy about. When the new sheriff summons Chris to his office he expects it's to tell him to return to jail duty again. Instead he's tasked with protecting a witness, Pavle, in a human trafficking case. Every safe house Pavle has been put in has been breached or blown, so the decision is made to have Pavle stay at Chris' home. As the traffickers, and I kind of want to say vile monsters here and that's not even strong enough for those creatures but I'm getting off track, anyway as the bad guys get closer and closer Chris soon realises that the only way that they could know all of Pavle's previous locations was to have an inside man at the sheriff's office. And they were playing to win - at all costs.

At the same time we get to know Pavle. How he'd been sold into slavery four years ago. How he was abused and mistreated. Details of it were never (thankfully) revealed, just on the broader scale, but let me tell you that was plenty for my poor bleeding heart. For my heart to break for Pavle. When we first meet him he's this broken shell of a man, afraid of everything and mistrusting everyone - and no wonder. But slowly he comes out of his shell, dares to believe no one will take his food or drink from him, and dares to bask in the sunlight in the backyard. Dares to have a voice. Dares to believe not everyone is out to hurt him or use him.

I love this kind of journey. This kind of healing. Watching someone find themselves and starting to believe, starting to live. However, this is also where this book takes a sour note for me. It takes place over a very short time, can't really tell you how much, but say a few weeks at most. During those weeks Pavle learns to trust Chris, feel attraction to him and subsequently fall for the man. I'm sorry but that feels so wrong for me. Yes I do know that everyone has their own mind and handle trauma differently and has the right to decide of their own body etc. But come on, if someone's (very) recently been rescued from four years of severe abuse, sexual and otherwise, had been indoctrinated to pay for everything, even food with their body. Are they truly of sound mind entering into a relationship just a few weeks later (no therapy in sight)? Where a raised voice causes them to curl up in the foetal position? I'm not saying I don't see why they got together, it's just the timeline that makes it feel very iffy and sticky and not right. Had they met a year down the road, where Pavle had had a chance to land, to understand everything going on, had a chance to heal, I truly would have enjoyed their romance, because it was a sweet one. But as it was I just couldn't.

Greg Tremblay did a wonderful job narrating this story, treating it with the seriousness that this kind of subject deserves. He gave Pavle a voice, captured his fear, hopes and dreams, in a very nice accent as well. He's this kind of narrator - performer - that can take any book and make magic. Make you forget the world around you and just enjoy the story he's telling.

Parts of this story worked for me, and others didn't. One thing is for sure though; if Tremblay narrates - I will be listening.

A copy of this book was generously provided by the publisher in exchange for an honest review.

I love this series so I wasn't surprised that I liked this one as well. Andrew Grey has a unique way of taking a sensitive subject and painting the picture so that it's bearable and not so dark.

Chris is newly promoted to the sheriff's office and his first real assignment is a favor to the Carlisle PD. Keep their human trafficking victim, Pavle safe until he can help the DEA, FBI and every other three letter agency identify his keepers. Chris will need to find a way to keep Pavle save without making it seem that he's just exchanged one prison for another and without any of those pesky feelings getting in the way for the strong, enigmatic man.

The story was entertaining and enjoyable. The characters were well developed as was the storyline. I love that we get to catch up with old characters like Red and Terry. The audio performance was perfect, as is to be expected from Greg Tremblay. He didn't get to be one of my go-to narrators for no reason. This was the perfect was to spend 6 hours.

I’m an avid Andrew Grey fan but when I realized what the topic of this story was I feared it was going to be too heavy and angst filled but it wasn’t. Andrew wrote the story in such a way that while Pavle did have some issues it wasn’t too dark and overwhelming. Greg Tremblay did an outstanding job with this one. His portrayal of Pavle was amazing.

I love Andrew Grey stories they are so enjoyable to listen to and the narrator brings the series to life .

This was such a heartwarming story. Andrew Grey has done it again. It brought tears to my eyes. Greg Tremblay as always did a fantastic job with his narration and bringing these characters to life. This story will pull at your heartstrings. And have you rooting for the two main characters. I highly recommend you listen to this story.

My favorite part of the story was Pavle’s voice. I was thinking of game of thrones “shame”. Well handled story dealing with a tricky subject. If only advocates were as effective as they are in the book. Really starting to like Andrew Grey and this narrator is sublime.

What a Great Story!

Andrew Grey writes about real people with real problems, and I love him for that. In fact, many of his characters are people with disabilities who face great challenges with a strength that comes from within, but also from the people who love and accept them. If you add to Andrew’s lovely characters Greg Tremblay’s amazing voice and talent, you have a killer combo! I highly recommend listening to Fire and Agate, written by a great author and voiced by a wonderful narrator. Kudos to both!

such a wonderful heartwarming story! loved this story. bit of danger, some bittersweet moments, and a fun Nana. lots of love!

Loved the story, especially of Pavle’s rescue and progression after. What a sweetheart he is! Made me just want to hug him! I liked the suspense, who was leaking information, would they get at Pablo so he couldn’t testify, was the Sheriff dirty or just incompetent. It really kept my attention. The romance between Chris and Pavle was sweet, but there seemed to be something missing. I can’t even think what it was, but I just didn’t feel the bond as I usually do in a Grey book. But! I still recommend the read/listen. Greg Tremblay did a fine job.

I loved the story & the narration was awesome... Narrator did a wonderful job with the accents!!

as good as the ebook

The performance from the narrator is also very important for me. I can't listen to a lot, because my English as a non-native-speaker isn't so perfect to follow a whole story over hours, when the narrator speaks too fast or too sloppy. Normally I have to SEE the person, who is talking to me in English. Greg Tremblay is one of the narrators, I'm able to listen without problems to follow.
I'm just not yet finish with the book, but I listen enough to give a review.