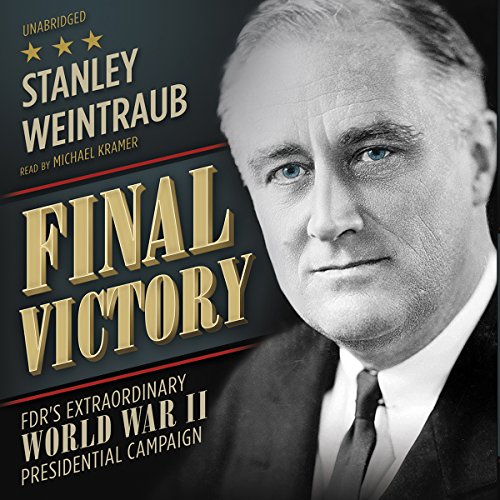 When the 1944 presidential election campaign geared up late that spring, Franklin D. Roosevelt had already been in office longer than any other president. Sensing likely weakness, the Republicans mounted an energetic and expensive campaign, hitting hard at FDR’s liberal domestic policies and the ongoing cost of World War II. Despite gravely deteriorating health, FDR and his feisty running mate, the unexpected Harry Truman, campaigned vigorously against young governor Thomas E. Dewey of New York and old-line Ohio governor John Bricker. Roosevelt’s charm and wit, as well as the military successes in Europe and the Pacific, contributed to his sweeping electoral victory. But the hard-fought campaign would soon take its toll on America’s only four-term president.

Preeminent historian and biographer Stanley Weintraub recaptures FDR’s striking last campaign and the year’s momentous events, from the rainy city streets where Roosevelt, his legs paralyzed by polio since 1922, rode in an open car, to the battlefronts where the commander-in-chief’s forces were closing in on Hitler and Hirohito. Weintraub, as he has done in all his biographies, brings to life the man and his times, capturing those small but telling details that inform and delight. The result is unforgettable.

About the author: Stanley Weintraub is a National Book Award finalist, professor emeritus of arts and humanities at Penn State University, and the author of numerous histories and biographies, including Silent Night and 11 Days in December. Editor of a 10-volume edition on the works of George Bernard Shaw, he lives in Newark, Delaware.

Even though one knows the outcome this tome brings the campaign and the personalities to life again. Highly recommended for anyone who loves the sweep and majesty of history.

What a mix! an election and a world war

Final Victory is, as the title claims, an extraordinary tale. It is 1944 and FDR, the President of the United States, a polio paraplegic, at 62 is now clearly very ill. But he is not interested in contemplating his mortality because he decides to campaign for fourth term in office. He fights this election as Commander in Chief in a country at war, and reduces public awareness of his physical limitations by using the power of radio and a limited number of rousing and witty speeches. Imagine being able to have that much control over what is known about the president in the modern world of communications.

The republicans -- their candidate was Dewey -- ran a bitter campaign against him.

Talk about two planets. In the world outside the USA, young men and woman were fighting a terrible war and huge numbers were undergoing unthinkable privations and dangers. Yet, back home, politicians were aware that some of the people at home (well, enough to play to them,) were largely focussing on their everyday lives and -- Dewey really worked on this -- life after the war. He presented arguments along the lines of: don't let us go back to the Roosevelt New Deal era, think about this because the war will soon be over. But what a thing to say: there was hell on two continents to be endured before the war was, indeed, over. He also even blamed Roosevelt for taking them into the war and pronounced the country's leaders to be tired old men.

What a context to be fighting an election. Great scope for cheap shots since national security simply did not, in many cases, allow the Commander in Chief to respond.

I suppose that one romantically imagines that a country at war is united by the common purpose of survival, rather than allowing the surfacing of arguments that sounded pretty treasonous to me. But of course, engagements, for example, in Vietnam and then the current Middle East was, were and are, in far distant lands -- and in fact, so was this war, except for the attack on Pearl Harbour which initiated the involvement. But, in contrast, Britain for example, didn't have an election during a war which was directly threatening the country, and the governments were largely all party war coalitions.

Anyway, listening to this book I kept on wondering if the electioneering vitriol would have been as strong -- or even allowed -- if the USA had been defending her very own borders.

Generally I found this to be a very interesting, well narrated book. Of particular value was meeting various personalities. In this, Weintraub is clearly not without his biases -- he's not too impressed with Macarthur, or Dewey himself, for that matter. And very sympathetic to FDR and Truman. Well, maybe history agrees with that bias as well.

Often, a book about a specific point in time can either become bogged down in detailed listings of uninteresting (yet important) events, or cover the topic at such a high level that it's impossible for the poorly informed (like myself) to understand what is going on. This book avoids those pitfalls. It gives a great insight into the personalities around FDR, the people who don't make the pages of regular history books. Compelling listening.

This fascinating story about FDR's final presidential campaign provides wonderful insights into the man and the politics of the day. I was interested to learn about how much things have changed in presidential campaigns since 1944, and perhaps a bit surprised at how many things have NOT changed. This book provides a fantastic behind-the-scenes look at a campaign that challenged American democracy and determined FDR's successor."

It is a compelling story, well written and well narrated.

Tell me something I didnt already know

Overall, an average book, nothing special. The beginning is good, the middle lags greanatly, and the outcome is known beforehand. One thing this book does accomplish is to get the reader interested in learning more about Harry Truman.