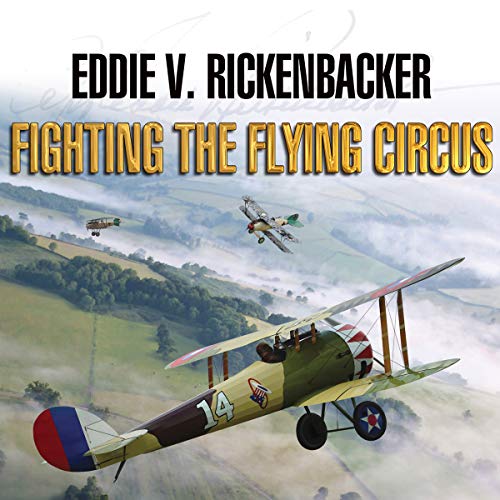 Captain Eddie V. Rickenbacker, originally from Ohio, was best known as one of the commanders of the 94th "Hat-in-the-Ring" Squadron, a crack unit of World War I pilots that included many former members of the famed Lafayette Escadrille.

The 94th ended the war in France with the highest number of air victories of any American squadron. Captain Rickenbacker later belonged to an association of pilots and Great War air veterans who, in the years immediately following the Second World War, invited many of the new "young" aces from the Pacific and European theaters for informal lectures. These men never lost their keen interest in aviation.

This book was written in 1919 and tells of his life flying planes during WWI. He was a WW1 ace and won the Medal of Honor as well as awards from France and England. He also wrote a book about his survival in a life raft after being shot down during WW11 his crew was at the time the longest survivors ever recovered alive in WW11. In civilian life he founded Eastern Airlines. He tells the story in a matter of fact way never making himself out to be a hero. He tells of the day to day life as well as the pros and cons of the machines they flew. This is the story of the beginning of what would become the U.S. Air Force. He made a comment in passing about the heroic role played by the U.S. Red Cross and U.S. YMCA in feeding the refuges flooding into Paris and by doing so saved Paris from riots and other problems caused by starving frighten people. There was so much history given in just an easy conversational way. A great book if you are interested in history.

Told in first person, this heartfelt memoir a World War I aviator comes to life. With humility regarding his own accomplishments, Eddie Rickenbacker, Americas WWI ace of aces, describes in detail the pilots, personalities, lifestyle and of course the dangers faced by a squadron at the front. A must-read for anyone wanting a greater understanding of The Great War and the dawn of aviation.

What made the experience of listening to Fighting the Flying Circus the most enjoyable?

This is such a wonderfully clean and debonair tell of the time of the Knights in the Sky!
It was exactly what I was hoping the book would be like. I could actually feel like I was right there!

Eddie... he is such a gentleman's gentleman! Oh if we could have more like him!

Mr Pruden was PERFECT. He had the perfect voice for the story. I reminded me of the OTR with Ronald Reagan.

A primary source from America's Ace of Aces

What did you love best about Fighting the Flying Circus?

Historical primary sources that are this colorful are rare. WWI has been hugely overshadowed by WWII for most Americans interested in history for a number of reasons, one being that it seems obscure, foreign, and bleak to today's reader. Rickenbacker's account gives it an immediacy that cannot be denied: these were young men fighting on the last front of modern war that had some claim to a code of gallantry and chivalry, though total war is by its nature brutal and unromantic.

I like social and military history, so getting a firsthand account of an aviator's life just as military aviation began to develop was right up my alley.

What does John Pruden bring to the story that you wouldn’t experience if you just read the book?

As the book is written in the first person, having it narrated made it feel more like Rickenbacker was telling his story to me personally. The narration is competent and unremarkable, which is probably a good thing with a book like this; the narrator has no quirks that detract from the story.

I was so glad to find this book on Audible. I had started it in 1979 when I was in school, but was unable to finish it. What a treat it was to get to the end!

Rickenbacker was a larger than life character that I had heard of, but knew little about. This book delves into the man, and his passion from an early age.
Having a love of aviation, I marvel at the accomplishments and innovations this man has achieved. The advancement of aeronautics has a great deal to credit to this amazing individual
A great read, especially for someone with interest in early aviation, and early military strategy. I loved it!

The book is a very interesting insight into the world of a World War I flying ace. considering how many died during their time in the air. For a fighter pilot to be there from the start of the American time flying to the end is incredible.

Amazing autobiography of an American icon.

This was an awesome and humble account of one of America's top heroes. I have read several other books about Eddie Rickenbacker but this is my favorite.

Calculating the Odds and Concocting a Plan

Following an introduction that gives context, the book moves rapidly to episodes of flying on the Western Front in 1918 as related by Eddie Rickenbacker. It’s clear that, like von Richthofen, Rickenbacker was a logical, analytical, calculating sort who reflected upon his mistakes and worked out how to correct them. He went into each combat with a plan in mind. He regrets killing enemy pilots--although it doesn’t seem to keep him awake nights. He’s always enthusiastic to bring one down. Unlike Richthofen, Rickenbacker has a sense of humor—at least in 1919 he does, the original date of the book’s publication. That changed over the years as Captain Eddie grew dour, seldom smiling. His squadron flew cast-off Nieuport 28s when it first went operational in the middle of April, 1918; it was given up-to-date Spad 13s the latter part of May. He writes that his 94th Aero Squadron first fought the famed Flying Circus during the battle for Chateau Thierry. Richthofen was in his grave by then but there were still legionary fighters among the Germans. The 94th Aero Squadron no doubt bumped into circus pilots as well as regular Deutsche Fliegers flying their Fokker D7s, Albatross D5s, and various two-seaters. It was dangerous work. Pilot grit was astonishing. Rickenbacker wisely kept a diary and so has the sequence of his days at the front in hand. The book more-or-less progresses from April, 1918, until the Armistice in November of that year by way of anecdotes. It’s a pleasant, interesting read and a must for war buffs and war gamers. It falls into the category of rip-roaring war stories with little dwelling on tragedy. Rickenbacker, America’s ace of aces, was awarded the Congressional Medal of Honor in 1930, twelve years after the war ended.