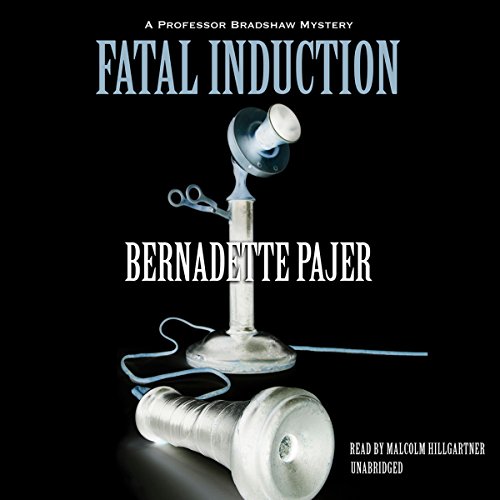 The race to win an electrical competition incites Professor Benjamin Bradshaw’s obsession for invention in this sequel to A Spark of Death.

The contest winner’s telephonic system will deliver music of the Seattle Grand Theater to homes throughout the city, and Bradshaw is confident he can win. But he is diverted by a peddler and a child gone missing, while the assassination of President McKinley drops Bradshaw and the entire nation into shock.

When Bradshaw discovers that the peddler’s child may have witnessed a murder, he follows her trail, which takes him to the Seattle waterfront below Yesler Way and into the seedy underworld of bars and brothels. Frustrated by the police department’s apathy and caught between power struggles, he doesn’t know whom to trust. Each step of his investigation entangles him deeper in crime and corruption until he realizes that, to save the peddler’s child, he must transform his contest entry into a trap to catch a killer.

The Professor Bradshaw Mystery series features Benjamin Bradshaw, professor of electrical engineering at the University of Washington. Bradshaw’s electrical, forensic, and investigative skills, combined with a keen understanding of human nature, once again bring the Seattle Police - and murder - to his doorstep amid the social and scientific turmoil of the early 20th century.

©2012 Bernadette Pajer (P)2012 Blackstone Audio, Inc.
Storico
Mostra di più Mostra meno
“[A] quaintly charming and idiosyncratic sleuth.” ( Publishers Weekly on  A Spark of Death)
“Plenty of historical details and an eclectic cast of characters, plus a well-constructed plot and terrific pacing.” ( Booklist on A Spark of Death)
“A…breathless journey from beginning to end.” ( New York Journal of Books on  A Spark of Death)

This mystery and its predecessor are great fun if you like historical fiction, unusual methods of murder/mayhem, and an intelligent hero. You'll figure out whodunit before the hero, but he's probably more naive than you are, and a scientist rather than a detective. I like the arcane vignettes into what it was like when electricity was still something of a novelty. There's just enough electrical theory to make it understandable without descending into technical jargon that bores rather than enlightens. The reader doesn't get in the way of the story. His accents are different enough you can discern the characters, but not so broad as to be difficult to understand.

This is a great series . I enjoyed it so much and I am downloading the next two books. I do hope Bernadette Pajer will write more on this series. Professor Benjamin Bradshaw is a wonderful, intelligent and good man. I also hope in future series he will have the courage to tell his son his when he is older the secret he is keeping from him. His dedication to truth and justice is so appealing. Wonderful series!