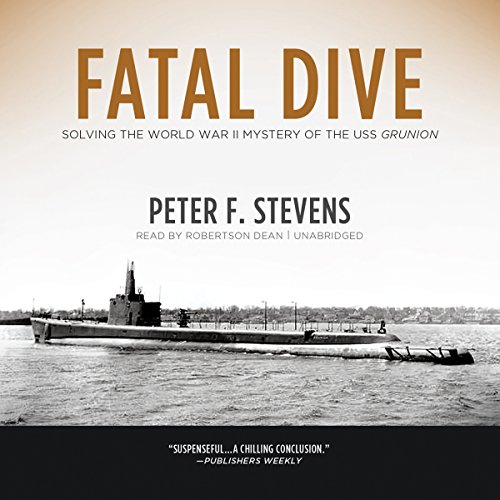 No radio distress call ever crackled from the submarine USS Grunion. In 1942, under the fog of World War II, the vessel simply vanished without a trace. For nearly sixty-five years, only a dead silence lingered regarding the fate of the sub and its seventy-man crew—until now. Here author Peter F. Stevens reveals the incredible true story of the search for and discovery of the Grunion—as well as the navy’s shocking and willful cover-up of the submarine’s baffling disappearance. The Grunion was discovered in 2006 after a decades-long search by the Abele brothers, whose father commanded the submarine and met his untimely death aboard it, but one question remained: what sank the USS Grunion? Now, for the first time ever, Fatal Dive reveals the answer: one of the Grunion’s own missiles. The navy knowingly sent the Grunion out with faulty torpedoes, and Fatal Dive reveals damning and never-before-published government documents that provide irrefutable evidence of its shameful cover-up. Intriguing and explosive, Fatal Dive finally lays to rest one of World War II’s greatest mysteries.

Peter F. Stevens, news and features editor of the Boston Irish Reporter, is a veteran journalist with a specialty in historical writing. His work is syndicated by the New York Times and has been published in dozens of magazines and newspapers. He is also a two-time winner of the International Regional Magazine Association’s Gold Medal for Feature Writing and the award-winning author of The Voyage of the Catalpa. He lives in Boston.

©2012 Peter F. Stevens (P)2012 Blackstone Audio, Inc.
Forze armate Seconda guerra mondiale Americhe
Mostra di più Mostra meno
“Suspenseful…a chilling conclusion.” ( Publishers Weekly)
“After the USS Grunion was lost in perhaps the most hostile environment of the war, the details of the submarine’s sinking off the Aleutian Islands remained a mystery for decades—until the deceased skipper’s sons set out with dogged determination to find out where and how their father died. Stevens manages to build suspense even though the reader knows the ultimate fate of the Gato-class ‘pigboat.’ Fatal Dive is a quick but thoughtful and moving read.” (Jim Defelice, bestselling author of Rangers at Dieppe)
“Peter Stevens unreels a fascinating piece of nautical history. This real-life drama of war, suspense, and human achievement in the face of frightful odds is mesmerizing from start to finish. A book for all.” (Lieutenant General Dave Palmer (Ret.), author of George Washington’s Military Genius)

Not my first Grunion book

This wasn’t my first Grunion book, or my first World War II sunken ship book, or my first shipwreck salvage book, but I must say that this one will stay with me because of how well written and personal it is. I cried. got me right in the feels. Well done.

The author did a great job of presenting the personal side and loss of war and the bureaucratic bungling of the government. The torpedo issue was a prime example of arrogant condescending bureaucrats doing CYA at the expense of the people doing the job. The biographies of the crew at the end really brought home The devastation of families both of the sinking in and of the cover up that followed. Very few books I’ve read of this genre have made an emotional connection with me but this one did! I would recommend it.

What a story. Wow.

Great book and well read. As a retired submariner and history buff I love books like this.

Powerful, Gripping and a Must listen to or read.

You hang onto every word, to every individual who is mentioned in this story. you learn of a Crew that perished serving there country a Submarine I had never heard of until I came across this. I learned of men and young men who's stories need to be told. Of son's stopping at nothing to find Jim's Submarine. I hope you listen to it or read it. I'll definitely be buying the book something I can hold in my hands and someday read to my kids. God Bless the families and Crew!!

A great but tragic story. A very engaging listen. The history is great. The ending is sad but uplifting also because the 70 men are finally recognized and finally laid to rest properly. Now their country honors them as it should have in 1941. The narration is very good, clear and concise and he doesn't struggle with the more difficult Japanese names. I would recommend this book for anyone interested in naval battles of the second world war or in general human interest stories.

It took exceptional men to crew these iron coffins

This may come across as superficial but I'm as serious as a heart attack: See if you can listen to the final chapter
without choking back tears. Its a postscript with each crewman's bio and his family's reaction
to his disappearance, If you can endure this without flinching, well, you are soulless.
The narrator must of needed a three day bender afterwards.

I am an aviator, not a mariner, but I can really feel the huge resposibility, described here, you have for people’s lives when things go wrong, - which they will do, sooner or later, both at sea, and in the air! A most poignant story to listen to today, 4th. of July, Independence Day!😌👍

very in depth and covers the personal stories of the crew of the boat. I liked this book

So glad they solved this mystery

I listened to this book in two sittings. It is amazing how they found the Grunion. It doesn't surprise me that the US Navy won't officially take responsibility for the torpedo scandal, even though it cost at least four subs. Typical bureaucratic face saving denial.

A tragic set of circumstances

It truly is a tragic set of circumstances. Weapons that are faulty is something even a seasoned captain cannot work around. I listened and couldn’t even imagine what the families were going through.
It was a great listen I most definitely will keep this in my library to go through it again.

I have read many books on WW2 and this is probably the most moving. Not only is it an amazing story it deals with the individual sailors who lost their lives like so many young men and women of the time. The personal stories of the men brings this to life and demonstrates the human costs of war.