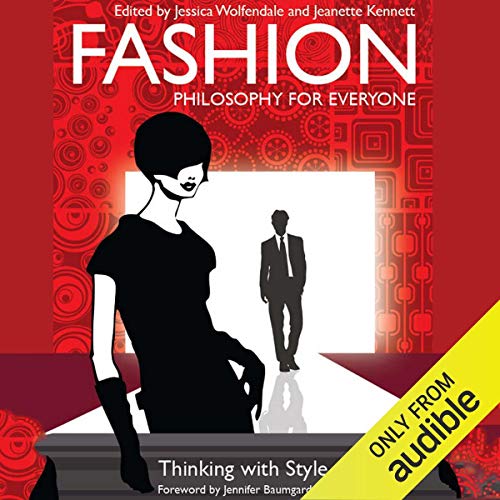 Most of us realize that fashion is more than just clothes. It's not just about wearing what's in. Fashion influences our judgments of people's taste, politics, sexuality, class, religion, and even their moral character. It can be a medium for technological and social change – changes in fashion may signal economic and political shifts. Yet fashion can also trap us. We can be slaves to fashion if we feel trapped by the roles dictated by the clothes we wear, and we can be slaves to fashion, literally, as in the case of sweatshop workers who make most of the clothes we wear today. This audiobook explores the diverse and sometimes contradictory aspects of fashion in a series of lively, entertaining thoughtful essays from prominent philosophers and writers.

How is it that clothes shape people the way they do?

You won't look at your wardrobe in the same light again!

Editors Jessica Wolfendale is Assistant Professor of Philosophy at West Virginia University, and perhaps a little too fond of vintage clothing. She is the author of Torture and the Military Profession (2007) and has published extensively on the ethics of torture, military ethics, and applied ethics. Jeanette Kennett is Professor of Moral Psychology at Macquarie University, Sydney, Australia. She is the author of Agency and Responsibility (2001) and has published widely on topics including empathy, addiction, self–control, advertising and love and friendship. Series Editor Fritz Allhoff is an Associate Professor in the Philosophy Department at Western Michigan University, as well as a Senior Research Fellow at The Australian National University's Centre for Applied Philosophy and Public Ethics. In addition to editing the Philosophy for Everyone series, Allhoff is also the volume editor or co–editor for several titles, including Wine & Philosophy (Wiley–Blackwell, 2007), Whiskey & Philosophy (with Marcus P. Adams, Wiley, 2009), and Food & Philosophy (with Dave Monroe, Wiley–Blackwell, 2007). His academic research interests engage various facets of applied ethics, ethical theory, and the history and philosophy of science.

If only it had a better narrator.

I was not pulled in by the narrator and spent weeks to get through this short audiobook due to being annoyed with the narration.

What was most disappointing about the authors’s story?

Would you be willing to try another one of Tracey Farrar’s performances?

Did Fashion - Philosophy for Everyone inspire you to do anything?

It inspired me to look more into the topic, through other narrators.

I just started to listen (listened for about 30 mins), it seems interesting. It is relatively old book (2011) so I am sure a lot in fashion has changed... They mentioned a little about environment in the beginning, I am curious to see if that will be talked about more in the detail.

A great introduction to fashion philosophy for anyone who wears clothes!

A thoughtful collection of essays which discuss everything from what constitutes fashion to why we follow it, what it means to women and what our choices say about us. Each chapter is thought provoking and gives the reader plenty to reflect on when considering their own fashion choices.

Reading it in 2019 I became aware of questions we should ask of the fashion industry today which have appeared since the book was published in 2011 such as: what choices should we make around sustainable fashion? What implications do the use of plastic fashion materials have on environment? It would be great to have a revised addition that addressed some of these debates.

In conclusion, a great introduction to fashion philosophy for anyone who wears clothes.

The author's have many interesting thoughts and views on the psychology aspect of fashion. In addition, goes into some depth on why fashion is at our human core to some extent.

As someone with no real interest in fashion, this was an approachable introduction to the many complex ideas in fashion. Touching on everything from history to problems the industry has struggled with during the emerging role feminism has played over the last 100 years.