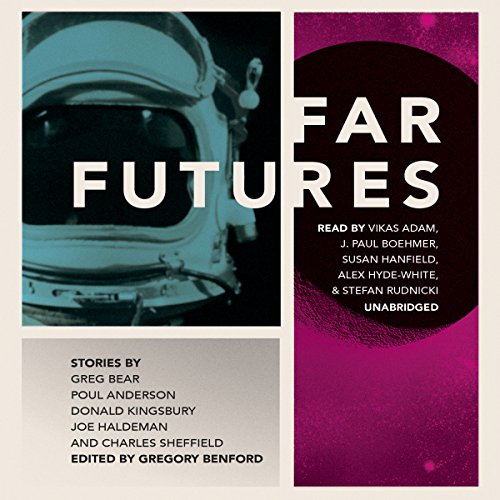 Five novellas of hard science fiction by five modern masters of the form.

From Nebula Award winner Gregory Benford comes this ambitious hard SF anthology that collects five original novellas. Each one takes the very long view - all are set at least ten thousand years in the future. The authors take a rigorously scientific view of such grand panoramas, confronting the largest issues of cosmology, astronomy, evolution, and biology.

The last moments of a universe beseiged occupy Greg Bear’s Judgment Engine. Can something human matter at the very end of creation, as contorted matter ceases to have meaning and time itself stutters to an eerie halt?

Genesis by Poul Anderson is set a billion years ahead, when humanity has become extinct. Earth is threatened by the slowly warming sun, and vast machine intelligences decide to recreate humans.

Donald Kingsbury contributes Historical Crisis, a starting work on the prediction of the human future that challenges the foundations of psychohistory, as developed in Isaac Asimov's famous Foundation Trilogy.

Joe Haldeman’s For White Hill confronts humanity with hostile aliens who remorselessly grind down every defense against them. A lone artist struggles to find a place in this distant, wondrous future when humanity seems doomed.

In At the Eschaton by Charles Sheffield, a man tries to rescue his dying wife from oblivion by hurling himself forward, in both space and time, to the very end of the universe itself.

Excellent production of far reaching sci-fi. These short stories are movie quality in imagination. Terrific ensemble of narrators make this a diverse and worthwhile listen.

I was particularly struck by the voice talent in this collection. It was excellent. As were ALL the stories. Without fail they entertained from beginning to end. Often I rely on speeding up the reading to get through particularly predictable, boring, and over wrought stories. I did none of that here. As someone who has listened and read many many science fiction anthologies I am confident in rating this one among my favorite. A small caveat, my tastes definitely lean toward far far future stories, that aside, I would recommend this to anyone who has the imagination to span millions upon millions of years.

The last story in this book was the reason for the purchase, other stories were meh