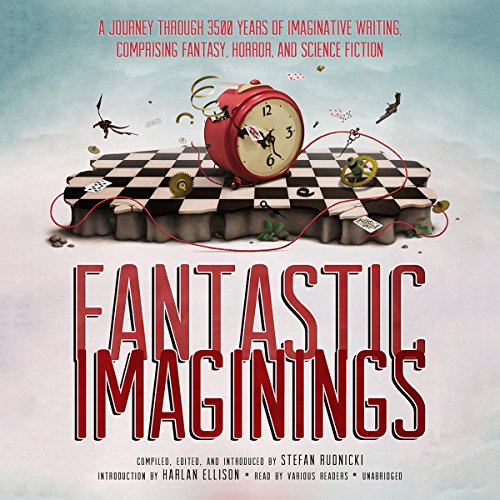 Collected here are the stories, poems, and religious writings that preceded and helped form the science fiction and fantasy genres. The collection explores the key imaginative roots and their later literary permutations. The author list alone reads like a literary who’s who and includes many writers not primarily known for their forays into the fantastic. Organized by topic rather than simple chronology, this volume allows the listener to trace the history of robots, aliens, and apocalypses up to some of their most recent manifestations.

SO GOOD! You've Got to listen to it

I'm recommending to everyone here, on Goodreads, on my FB page

What other book might you compare Fantastic Imaginings to and why?

There have been some good anthologies over the years, but none like this. Each short story is read by a different reader, each better than all the others

It humbled me. How can I possibly write that well? Then that turned to motivation: by re-listening to them & learning from them

I have listened to 22+ ours of this, so you don't have to. If you are a huge Science Fiction Fan like myself, then you think you must buy this. If you are willing to listen so long to get about four or five good hours of listening and learn a little bit, then go ahead, but if I knew then what I know now, I would have passed. I did find a couple of gems, but not enough to warrant treading through all the rest. Before I start let me say thank you to the bug eyed reviewer who listed the table of contents and in order, something Audible should have done.
I will take this section at a time.
Harlan Ellison's Introduction: Lofty Ambitions.
With the exception of the dig to modern editors such as Dozois, this seems like a good intro. It certainly gets you excited to listen to all 22 hours of the book. After listening you will be upset at being sold such a bill of goods. Ellison, also in his old age, should have learned by now how to praise a person without putting down another. He claims there has not been a good editor of science fiction since Groff Conklin. Groff Conklin was a great editor, especially for his time, the fifties. Gardner Dozois puts out an annual anthology of the best of Science Fiction and has now for over 30 years. In each book he summaries the year in Science Fiction. His summary covers the health of the previous sf year, book publishers, magazines (including actual numbers of magazines published, prices, addresses, web sites, etc...), semiprozines, online only magazines, original anthologies, fantasy anthologies, horror anthologies, novels, first novels, novella chapbooks, Novel omnibuses, out of print books that came back, short story collections, art, movies, television, list of all the award winners, obituary, and more. It goes on for pages and pages. If you are a science fiction nerd like myself, you read and absorb, if you just want good stories, you skip it and go on to an excellent collection of stories. The copyright of this book is 2004, so it may have been to early to recognize John Joseph Adams, who has been coming out with some really good original collections.
We are also told by Harlan that Rudnicki is the worlds greatest editor because he has read thousands of books and speaks various languages. I read and listen to hundreds of books a year, does that make me a candidate for a editor of an anthology? I know I could have come up with a more entertaining collection of material. This collection did not even include Gilgamesh, the worlds oldest book, and a very good book at that. I do not blame Rudnicki, although he did allow this to be published about him. Ellison has a history of mouthing off and he is always hot or cold, never between.

MYTHS WE LIVE BY
About nine entries, of which only one is good (Robert Silverberg's After the Myth). Two more are okay and the rest are painful to listen to.

MYTHS THAT BITE
About six entries, of which one is great (Barry Pain's, Dairy Of a God.), two okay, three painful.

SHOCKING FUTURES
About six entries, of which one is most excellent (Fritz Leiber's, A Pail of Air), one excerpt is good, four painful.

TRANSFORMERS
The best section, including works from Card, Asimov, Stoker, and Goblin Market by Christina Rossetti. Although I don't see how Card's entry is a progenitor to anything. It is an excellent story, but does not keep with the theme of the collection.

REST IN PIECES
Starts with the Hearse song, which is hilarious, has an except from Revelations, which is extremely scary, a great old story by W.E.B Dubois, and a great story by Clarke. Mixed in are about six painful listens.

Commentaries
This starts with a pretty good piece by Bova. He basically defines what science fiction is. He does not like the term Sci-Fi and he hates Hollywood, probably cause they have never turned any of his hundreds of books into a movie, mostly cause they are not that good. I like some of his books and I know he is a scientist, but that does not mean he is a good writer. His characters are usually card board cut outs and he usually has a lot of dull spots. He says in his essay that science is often boring and he often proves that in his writings. Not sure why Rudnicki included this commentary as it goes totally against what he gives us, as most of his Science Fiction does not include any science. SR even comments that Dante's Inferno is as much science fiction as Verne or Clarke's work. I have read Inferno and I never noticed any science. It was good fantasy and it is an insult to Verne and Clarke to have their thoroughly researched writings be compared to Fantasy.

Do not miss Elliot Engel's biography on Edgar Allen Poe. It is a fascinating story and almost made listening for 22 hours worth it, almost.

I agreed with Card's commentary and I think I have heard him harp on it before. He is a great writer and he gets tired of academia looking down their noses at Science Fiction. He has mentioned before that if kids in school could read some good science fiction instead of the boring English Literature, they are forced to read now, they would be better readers as adults. This commentary did get a little technical.

Narrators
Rudnicki does the majority of reading and the rest are professionals. There is one gravely voiced narrator I did not love, but that is a personal thing.

Good for myth lovers but not for Sci-Fi lovers

Liked 20% of the stories, found another 20% interesting and skipped through the rest. Life's to short! I am not interested in horror or myth. Some fantasy is good. So 60% of this collection was not enjoyable. Some of these forgotten works should remain so.

Stefan Rudnicki does a very interesting job of presenting a tasting menu for ongoing readings of sci-fi inspiration over 3000 years. I will now pursue the full books on several of these. The cast is well, astounding, and the plays and ensemble pieces were very well done. I enjoyed Harlan Ellison's Introduction. Cast members like Bahni Turpin and Cassandra Campbell are gems.

It's hard to describe this collection. I'll start by saying it's a good listen and worth a credit for the epic introduction by Harlan Ellison alone!

This is not at all a global or real historical survey of fantasy themes, as I was hoping from the description. It's mainly American, a little European, and mostly 20th century, with a sprinkling of earlier stuff. On the theme of 'Pan', for instance, there's four or five modernish short stories and just one tiny snippet from The Bacchae.

It leans heavily towards not-exactly-timeless stories that sound as though they're drawn from pulp magazines-- not a bad thing! as I'd come across hardly any of these before and they're generally good fun and read with spirit. Still, they're not towering masterpieces by any means and there's about twenty too many of the nymph-like, nagging and/or drippy women typical of the genre which gets a bit grating.

Though I would love to hear a real anthology of the historic roots of modern genre fiction, I can't mark down this audiobook for not being what I want it to be. Four stars, mostly pretty good stories excellently read.

This badly needs a table of contents available somewhere, there's dozens of stories and good luck remembering who wrote what as the introductions fly past.