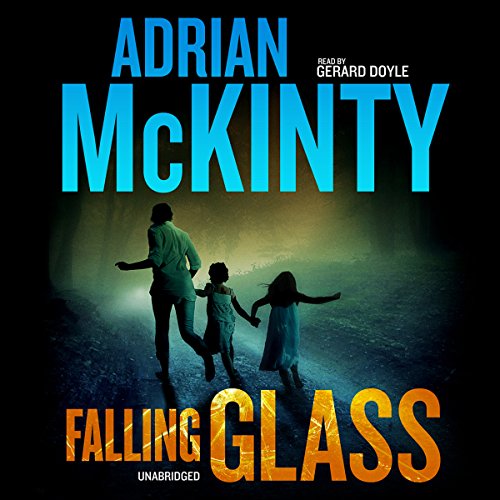 Richard Coulter is a man who has everything. His beautiful new wife is pregnant, his upstart airline is undercutting the competition and moving from strength to strength, his diversification into the casino business in Macau has been successful, and his fabulous Art Deco house on an Irish cliff top has just been featured in Architectural Digest.

But then, for some reason, his ex-wife Rachel doesn’t keep her side of the custody agreement and vanishes off the face of the earth with Richard’s two daughters. Richard hires Killian, a formidable ex-enforcer for the IRA, to track her down before Rachel, a recovering drug addict, harms herself or the girls.

As Killian follows Rachel’s trail, he begins to see that there is a lot more to this case than first meets the eye and that a 30-year-old secret is going to put all of them in terrible danger.

Falling Glass is an Audible.com Best Thriller of 2011.

Adrian McKinty is a darn good storyteller. He’s the real thing and keeps getting better and better.

Don’t let this book fool you. Yes, it’s an action-packed thriller, but it’s much more than that. The story is brutal but beautifully, hauntingly, and lyrically written. Imagine a cross pollination of F. Scott Fitzgerald and Chuck Palahniuk. Or James Joyce and Quentin Tarantino. Add laugh out loud passages – the humor is priceless – and little bits and pieces information of all kinds, and you have all the ingredients for a story that’s absolutely impossible to put down.

“Hidden River” is still my favorite Adrian McKinty novel – your first is often your most memorable – but “Falling Glass” is close (the Dead trilogy is also close… OK, it’s hard to pick a favorite).

The hero of “Falling Glass” is a good but flawed Irish boy who just wants to recover losses from the bad economy and go back to studying architecture. Killian’s out of “the business” but decides to go back one last time to pull himself out of debt. Thus the ride begins, the roller coaster cranking on the upswing, quickly reaching the crest and before you know it, you’re hanging onto your seat and your hair is standing on end.

Even an Angel of Death needs a halo...

Adrian McKinty formally introduces a formerly secondary character as his new main man of action and conscious, Killian. Killian’s globetrotting adventures are as tense and intelligent as McKinty’s best chronicles of Michael Forsythe of the Dead Trilogy. Forsythe reappears in this latest masterpiece of fiction, but as a background player. “Falling Glass” is a welcome addition to McKinty’s canon. The writing is tighter than ever, the suspense gripping and thoughtful.
McKinty has done his homework as usual with his descriptions of times, places, and events bringing his reader vivid images of the exploits of each central character. His inexhaustible knowledge of history and geography are put to impeccable use for “Falling Glass”.
As a tireless fan of McKinty’s writing I could not wait to get the book here in America so I had no choice but to get the audiobook from Audible (though I still have my order placed for the book itself). Gerard Doyle’s familiar narration of McKinty’s storytelling is as intense and captivating as holding the book in your hands. At just over nine hours the story moves along at an incredible pace with not a dull moment to be found. At the conclusion of “Falling Glass” I was left wanting for more of Killian’s adventures, just as each of the books in the Dead Trilogy leaves the reader wanting more of Michael Forsythe. The final confrontation is as unexpected and masterful as is expected from Mr. McKinty. Killian is a brilliant successor to Forsythe’s literary fortunes and charms.

Another very good book by Adrian McKinty, the Irish author of the Dead Trilogy (which featured Michael Forsythe as its main character).

Michael Forsythe is a minor character in Falling Glass.

Falling Glass, set primarily in Northern Ireland, has as its main character Killian, an Irish Traveller (also know as Pavee, a gypsy-like and nomadic group in Ireland). Killian is hired by the extremely wealthy, powerful and well-connected Richard Coulter to find Coulter's ex-wife Rachel and their children.

McKinty is a good and entertaining writer who appears inspired by Raymond Chandler. Several chapter titles in Falling Glass are Chandler books, e.g., The Big Sleep. The style of writing, the fierce code that drives the main character's actions and the genre are all very reminiscent of Chandler.

Falling Glass is fast-paced and very engaging. It is recommended to existing McKinty fans but also to anyone who enjoys crime fiction.

As Good as James Lee Burke

I have a difficult time with the level of violence and dark, destructive life styles. However,
McKinty's skill is so superlative, his writing so gorgeous, the narration so brilliant, I persevere. He reminds me of James Lee Burke in his skill level. And I don't make it through all of his books either.
I have read four books. I am anxious for the next Sean Duffy novel. Michael in New York is more difficult for me. If you can handle the violence these are fabulous stories!!!!! For me MIchael Connelly, James Patterson, and the longish list of formulaic production writers pale. I have not enjoyed stories this much since Stieg Larrson. ------P. S. I am a sucker for the Irish accent.

An Audible Best Thriller of 2011

STORY - Falling Glass is definitely a fast-paced thriller. Killian, the main character, is an ex-IRA enforcer who is hired to find the ex-wife of a very rich man. She uses drugs and has run away with their children. There is also a Russian hired to kill the same woman. There are lies and secrets which make the story interesting as well as plenty of action and violence. The ending is.....not typical.

The main characters are what I would call "gray" characters -- neither perfect white nor villanous black, which makes each of them unique and very real. The story is set in Ireland, read by an Irishman and written in what seems to be native Irish lingo and slang. (I had to Google several terms). Descriptions of the Irish countryside and a background of its politics enhanced the whole experience.

PERFORMANCE - It took me a while to get used to the narrator's accent, especially when he uses unfamiliar wording. He ends each sentence in an upswing as if he's asking a question, which took some getting used to as well.

OVERALL - This wouldn't have been my choice for Best Thriller 2011, but it's a very good book. There's sex, violence (including a little dismemberment) and the F-word flows freely, so it might not be for everyone.

Kudos to McKinty for crafting another deeply interesting, informative novel populated with genuine characters who move through life just as emotionally flawed as the mere mortals who are reading about them. Gerard Doyle's narration is the perfect complement to a terrific story.

I liked the ending. The overall story was compelling if a bit predictable. The characters were well rounded and the descriptions of the settings were nice. My only issue was with the beginning, it was disjointed and easy to get distracted out of the story.

One of his most satisfying

I've always enjoyed Adrian McKinty's novels and this one is no exception. In this one, you are drawn into the world of Killian - a retired bodyguard/enforcer who has been forced out of retirement with the crash of the "Celtic Tiger". McKinty crafts a believable and engaging character in Killian and gives him a fast moving plot full of twists and turns.
Well read, too!

The ending is really, really good.

This is the first McKinty that I've read or listened to. Killian, the protagonist is sympathetic, well developed, complex. The atmosphere is romantic, realistic, and brutal, an interesting mix of normalcy and the underworld.

Other reviews reveal the plot. I'll just comment that though well done, the sequences of betrayal, murder and mayhem have been written elsewhere and equally as well. In other words, no surprises. EXCEPT, the ending. It's a great save in an otherwise good (not great) storyline.

By the way, it took half the book to become accustomed to the reader's rhythm, but then my family's from the south.

Read everything this guy writes.

Adrian McKinty is the best writer of novels that I have come across in my 66 years. He is better at describing the plight of victims than Dickens; better at dialogue than Robert Parker; as funny as David Rosenfeldt; as good at plotting as Nelson DeMille. Maybe he doesn't have the oddball characters of Carl Hiassen, but who does? And Hiassen is like a rich dessert. McKinty will make you work for some of it. His allusions range from classic literature and mythology to hum drum television. I think this is as good as it gets.

Killian has decided to retire from enforcement, but then the bottom falls out of the housing market and his investment fund goes south. So, back to work, chasing an absconding ex-wife. But it gets more complicated. At times very funny.

Another great story from Mckinty..
I enjoyed the characters and loved the end.
Can't wait for his new novel 'The Chain' already pre-ordered.

A great story by one of my favourite authors.A must listen like all of his work