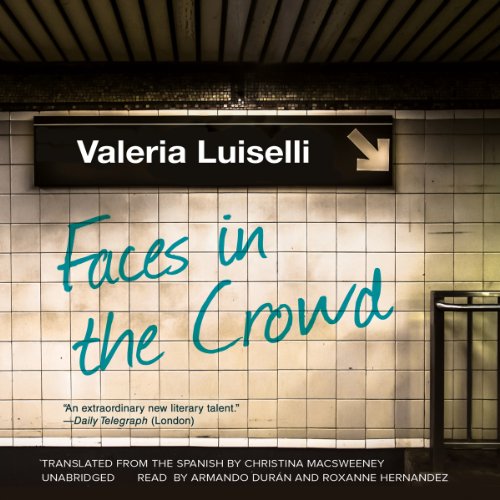 Faces in the Crowd

A young mother in Mexico City, captive to a past that both overwhelms and liberates her, and a house she cannot abandon or fully occupy, writes a novel of her days as a translator living in New York. A young translator, adrift in Harlem, is desperate to translate and publish the works of Gilberto Owen, an obscure Mexican poet who lived in Harlem during the 1920s and whose ghostly presence haunts her in the city's subways. And Gilberto Owen, dying in Philadelphia in the 1950s, convinced he is slowly disappearing, recalls his heyday decades before; his friendships with Nella Larsen and Federico García Lorca; and the young woman in a red coat he saw in the windows of passing trains. As the voices of the narrators overlap and merge, they drift into one single stream, an elegiac evocation of love and loss.

Valeria Luiselli's debut signals the arrival of a major international writer and an unexpected and necessary voice in contemporary fiction.

I know there are many people who absolutely adore this book. Sadly I’m not one of them. I think I got more out of it as an audiobook as at least it was clear cut who was saying what. And even then the storyline was so fluid and malleable it was hard to keep up. I imagine I’d have kept more aware of what was going on if I’d actually liked any of the characters, but I felt indifferent to them. The ‘character’ I was most interested in was the dead tree!

I feel a sense of worthiness for having stuck this out to the end, but also a sense of failure for having made myself slog through it!

Ah well. I am happy that this book has its audience, and am happy to now go on to be an audience for another, completely different, book which contain a world more able to hook me in, challenge me, and make me feel uplifted for the experience.

But please: if this book in any way calls to you, give it the time to work on you. You may be who it was written for!