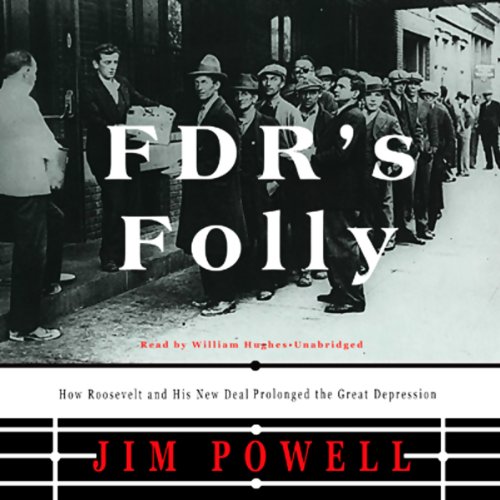 In the minds of historians and the American public alike, Franklin Delano Roosevelt was one of our greatest presidents, not least because he supposedly saved America from the Great Depression. But as historian Jim Powell reveals in this groundbreaking book, Roosevelt's New Deal policies actually prolonged and exacerbated the economic disaster, swelled the federal government, and prevented the country from turning around quickly.

In today's turbulent domestic and global environment, eerily similar to that of the 1930s, it's more important than ever before to uncover and understand the truth of our history, lest we be doomed to repeat it. You'll never look at FDR in the same way again.

A book for our time

Given the challenges and choices facing our country, this book presents a unique opportunity for Americans to gain the insight, understanding and knowledge our public education system failed to provide us. This book provides that which every American requires in order to make necessary, timely and informed political and personal choices, confidently.

The information you never were taught in school

failure of the New Deal

Roosevelt wasn’t all he’s cracked up to be

Books like this expose the truth about FDR and his policies. WE took years longer to recover thanks to the idiotic policies enacted by him and his cronies.

Must read for all free people

This is the most enlightening book I’ve ever read. It thoroughly details how governments with potentially good intentions have devastating consequences that disproportionately effect people with lower incomes. It’s an eye opening book.

An entertaining wander through creative history

If a smart witty writer set out to write a satire on politically motivated mis-interpretation of history, a finer job would be hard to find. Attracted by the title, I approached this book expecting an exploration of how some of FDRs polices were exploited by carpet-baggers or possibly a comparison with later downturns, and how policies advocated, but never used in the great depression would have been more helpful.

Instead, this book is one of the greatest acts of revisionism I've ever seen. Making an assertion, then selecting information that makes the case. No comparison with the 1890s downturn is made, no facts contrary to the case admitted.

This book should be studied in schools as an example of creative writing.

A breath of fresh air

Aside from the constant references to Milton Friedman (whom I like and respect as the utmost free market advocate but whose monetary ideas proved to be less then great), this book is simply perfect. It should be read by anyone involved in government, for sure. The bullets in the end should be displayed all over government buildings.

Educational but listen to the Abridged Version

This is an educational book that puts the various aspects of government great depression programs and regulations into perspective that wasn't covered in any detail during my school years. As you read, it's somewhat scary as many of today's political overtures are along the same lines of what was tried in the great depression era. I only gave this book a three star rating as much of the same main points were rpeated even though the author breaks out each aspect of government focus. I would suggest the abridged version hoping it reduces the amount of this repetition.

This book, along with The Forgotten Man, are timely reminders of what occurred when massive federal intervention is the economy was last tried. The narrator does a fine job. FDR's Folly is well deserving of a listener's time and attention.

Scones for the Tea Party

Going into this book I expected to hear a new scholastic exposition upon the failings of the New Deal. Instead it was a Libertarian set piece on how the entire FDR administration efforts were machinations for re-election and to convert the American economy to Socialism! Every single New Deal policy was part of a malicious and devious plan to strip Americans of their individual liberties through increased taxation and larger government. According to the author capitalist free markets that are unconstrained by any regulation are the only historical economies to produce human progress. Any regulation, be it insurance on deposits, Social Security, or limitations on the sale of swamp property, all impede free markets! The book was written in 2002 and hasn't been updated to explain how FDR caused 2008.