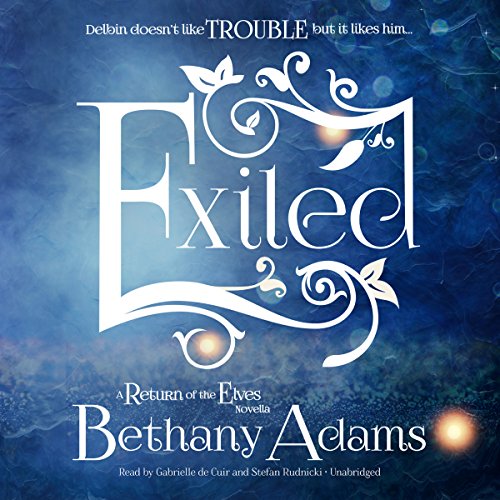 For a hundred years, Delbin has lived on Earth, voluntarily cut off from his birth land, Moranaia. He's learned to hide his elven nature and use his mind magic without getting noticed - until he accidentally wields it on the Moranaian scout sent to check on him.

Though Inona has good reason to mistrust exiles, part of her job is to make sure they aren't causing trouble. She sets out for Earth with one goal: get this annoying mission over with. But from the moment Delbin tries to use his power on her, she can tell he is different. As more of his story unfolds, she learns that some exiles might not be what they seem.

When a rogue Moranaian prince tries to recruit Delbin, Inona's mission becomes anything but standard. Now Delbin and Inona must work together to hunt down the prince and uncover his latest plot.

Delbin might not be able to return to Moranaia, but he'll do anything to save it.

I'm loving this series! it's different from what I've read and listened to in the past but I can't turn it off!

Banish elf Delbin works for a travelling circus, has lived on Earth for 100 years and forbidden to use his magic especially in front on humans.
Inona is an agent and her job is to monitor the exiles (kinda like a parole officer) Delbin accidentally uses his powers on Inona and the story unfolds - Inona learns that not all exiles have been treated fairly.

Delbin and Inona work together to hunt down the rogue Moranaian prince and uncover his corrupt plot. When Inona realizes that Delbin is risking his own life to save Moranaia, a world that abandon him, she decides to do something about it.

This is the great beginning to a book, a book where questions are answered, and there's an actual story arch. Instead, this is 2 different intros in which nothing is explained