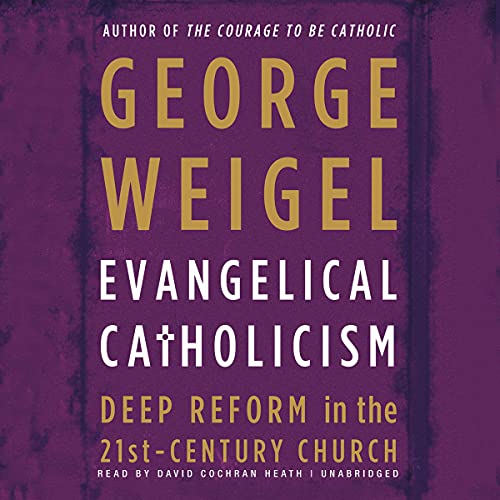 The Catholic Church is on the threshold of a bold new era in its two-thousand-year history. As the curtain comes down on the church defined by the 16th century Counter-Reformation, the curtain is rising on the Evangelical Catholicism of the third millennium: a way of being Catholic that comes from over a century of Catholic reform; a mission-centered renewal honed by the Second Vatican Council and given compelling expression by Blessed John Paul II and Pope Benedict XVI.

The gospel-centered Evangelical Catholicism of the future will send all the people of the Church into mission territory every day - a territory increasingly defined in the West by spiritual boredom and aggressive secularism. Confronting both these cultural challenges and the shadows cast by recent Catholic history, Evangelical Catholicism unapologetically proclaims the gospel of Jesus Christ as the truth of the world. It also molds disciples who witness to faith, hope, and love by the quality of their lives and the nobility of their aspirations. Thus the Catholicism of the 21st century and beyond will be a culture-forming counterculture, offering all men and women of good will a deeply humane alternative to the soul-stifling self-absorption of postmodernity.

Drawing on 30 years of experience throughout the Catholic world, from its humblest parishes to its highest levels of authority, George Weigel proposes a deepening of faith-based and mission-driven Catholic reform that touches every facet of Catholic life - from the episcopate and the papacy to the priesthood and the consecrated life; from the renewal of the lay vocation in the world to the redefinition of the Church’s engagement with public life; from the liturgy to the Church’s intellectual life. Lay Catholics and clergy alike should welcome the challenge of this unique moment in the Church’s history.

“A call for pride, sincerity, and depth in Catholic life and community…The bulk of Weigel’s book examines how this new Catholicism can be applied to the episcopate, priesthood, liturgy, laity, etc. The author makes many important points, and his call toward a deeper spirituality and sense of mission in Catholic life is laudable.” ( Kirkus Reviews)
“A rare book that can transform culture and communities from the inside out, beginning with the humble premise of evangelization: to proclaim - in word and deed - the good news of Jesus Christ. No stone is unturned, no promise or issue within the church and her members is ignored in this excellent, well-thought-out guide for reform-based evangelization.” (Carl A. Anderson, supreme knight of the Knights of Columbus)
“Evangelical Catholicism is a remarkable intellectual and spiritual achievement, even by George Weigel’s dauntingly high standards. It is nothing less than a blueprint for the reevangelization of the West and the reinvigoration of the rest of the world.” (Mary Eberstadt, author of  Adam and Eve After the Pill and  The Loser Letters)

The Life I Have Tried To Live

Where does Evangelical Catholicism rank among all the audiobooks you’ve listened to so far?

I don't give many 5 stars because I want that reserved for books that changed my life. This is one of them.

I had never heard the term Evangelical Catholicism until I found this book. George Weigel describes the Catholic life I have tried to live since joining in 1990.

Must Read for any 21st Century Catholic

Author lays out the case that now is the time for robust, culture engaging Catholicism. Both Pre Vatican II and Chatholic-lite of the 1970's Constant- Reform movement are on the way to extinction. While the like of Bishop Barron and West African Catholicism are Exploding in popularity and conversions.

A Blueprint For The Catholic Future!

Brilliant examination of the landscape of the church and where hope lay to fulfill it's mission of making disciples of all!

I agree with a lot of what George Weigel has to say. That is not the reason for my negative review.

However, by about half-way through the book it becomes increasingly clear that "deep reform" means "what George Weigel likes". And at some point he shifts from the descriptive to the prescriptive. This book might hurt "evangelical Catholicism" by it's tone.

Also, David Cochran Heath, while clear, is very boring to listen to, and often puts the emphasis on the wrong part of a long sentence, as if he hadn't read it before, or doesn't know what it means. And, personally, I can't stop thinking of him as the narrator of the ESV Bible.

Think this book was helpful in getting me to think about my faith and put things into prospective.