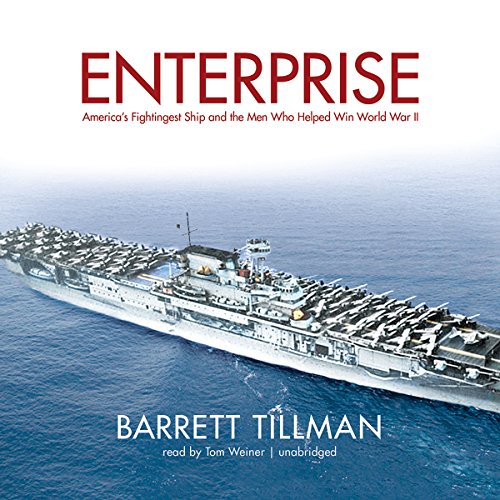 Offering a naval history of the entire Pacific Theater in World War II through the lens of its most famous ship, this is the epic and heroic story of the aircraft carrier USS Enterprise and of the men who fought and died on her from Pearl Harbor to the end of the conflict.

Award-winning author Barrett Tillman has been called “the man who owns naval aviation history,” and Enterprise is the work he was born to write: the first complete story of “The Big E”, incorporating oral histories and the author’s own interviews with the last surviving veterans who served on her through the major battles of the Pacific war.

America’s most decorated warship of World War II, Enterprise was constantly engaged against the Japanese Empire, earning the title “the fightingest ship” in the navy. Her career was eventful, vital, and short. Commissioned in 1938, her bombers sank a submarine just 10 days after the Pearl Harbor attack, claiming the first Japanese vessel lost in the war. It was the auspicious beginning of an odyssey that Tillman captures brilliantly, from escorting sister carrier Hornet as it launched the Doolittle Raiders against Tokyo in 1942 to playing leading roles in the pivotal battles of Midway and Guadalcanal to undergoing the shattering nightmare of kamikaze strikes in May of 1945. This is the definitive history of the ship whose aviators claimed 911 enemy aircraft and 71 ships, a saga of seemingly ceaseless heroism.

Barrett Tillaman is a widely recognized expert on air warfare in World War II and the author of more than 40 nonfiction and fiction books on military topics. He has received six awards for history and literature, including the Admiral Arthur Radford Award. He lives in Mesa, Arizona.

The author has assembled  a wonderfully detailed account of the life of one of the greatest warships in all recorded history. Surely there are not many other ships that can place themselves at or near so many of the key junctions in the stream of human events.From its almost being at Pearl Harbor on December 7, 1941, to its launching aircraft that struck decisive blows at Midway and the Philippine Sea, to its role as the only functional carrier in the South Pacific for much of the later part of 1942, this book recounts the contributions made by the ship and her crew, as well as the sacrifices required of them.
Though the narration is very welll done, it bears mentioning that this is not a novel. It is a narrative history that on occasion takes on the meticulous tone of an after action report, letting you know what was going on where with sufficient precision to leave you potentially lost in the details. This can be particularly true when discussing flight operations involving numerous air crews,  though that specific circumstance is hardly something one can blame on the author or narrator.
All throughout, one will find interesting details about life on the carrier, night fighter doctrine and tactics, the different command mentalities of the ship's various captains, and the difficulties endured by those who fought the war from the decks of flattops and the cockpits of the planes that flew from them. Anyone with an interest in World War II should find much to interest them here. A more general knowledge of the Pacific War going  into this story might be helpful, as well as  basic knowledge of the region's geography.
I myself was most intrigued by coverage of the ship's early life, from its birth as part of FDR's economic recovery efforts to its peacetime cruises leading up to Pearl Harbor, as well as the heartbreaking details of its final days. This truly is an engrossing story of a good ship's life and times.

The story itself was not bad. My main issue with the book are a combination of opinions and terminology used that are limited in scope of thinking, combined with obvious technical mistakes and a breakneck pace of throwing names at you with no previous context it became a mess of a role call with facts thrown in. Other books with just as many names thrown around do a much better job of helping the reader to know who is who and what is going on rather than a shopping list of events that presents itself in this book.

First there are several minor thing that the author did not get right such as referring to the TBD as having a three person crew. It had a two person crew. There were a number a small things like this that I found annoying.

Several degrading comments towards the Japanese that were out of quoting context such as calling them “bloodsuckers” on more than one occasion I found unnecessary. It also diminishes the tough struggle the Enterprise crew went through to make their enemies out to be mindless monsters.

That said, the length of detail of the ships history was impressive and seldom seen.

For the performance I am giving it a three due to the sheer speed it was read at. That being coupled with the layout of random things with no previous context thrown at you sometimes makes it hard to follow.

Amazing historical account of the ship and the men that fought her. From the start to finish a truly in depth look at the crew that made up the story of Enterprise. Found it informative and in some stories funny.

Would you consider the audio edition of Enterprise to be better than the print version?

I'm sure the print version has loads of pictures -- I missed having these to look through.

What other book might you compare Enterprise to and why?

There's plenty of books I have read about ships and their histories - "The Terrible Hours" about the USS Squalus, "Assault on the Liberty", "Duel between the Ironclads," to name but a few. There are several other books about aircraft and their crews - "Dauntless Helldivers", "Fork-Tailed Devil", "Lady be Goode", "A Missing Plane." I'm ignoring the books that covered entire campaigns. Probably some others that I'm forgetting.

The character of "Bulk Head", though brief, was memorable. There were plenty of other characters as well, but I can't name them. (I listened to the book several months ago.)

I thought I knew a lot of the history of the ship & crew and wanted to fill in the blanks. I was vastly mistaken -- there was a ton that I did not know.

Excellent book. If there is a way to add digital pictures to the recording, this would vatly increase the overall listening experience.

this book provides great insight into the birth, life, and death of a world war II aircraft carrier. if you are a fan of world war II or naval history then I highly recommend it.

As other reviews have said, the author's clearly got issues with the Japanese. I probably wouldn't have noticed it, but his digression about the celebration of the battle of midway at the Naval College is incredibly out of place in the book. His complaint is that the speaker had failed to mention the Japanese because of "Political Correctness."

It makes me seriously question the author's objectivity in the rest of the book.

Good book on the history of Enterprise during it's service life. Many successful battles were conducted from her time.....

I truly enjoyed reading the history of the Enterprise. It moved a bit slow at times with perhaps too much detail, but overall an strong work.

A lot of names to keep track of but they’re mostly consistent throughout the story of the carrier. Unavoidably jingoistic but even that is on the light side.

Narrator is decent if a little too “manly,” but I suppose it’s a good fit. He reminds me of the voice actor who portrayed Jet in Cowboy Bebop.

This is a great book and well read! Just enough technical details and human interest to keep my attention. I highly recommend!