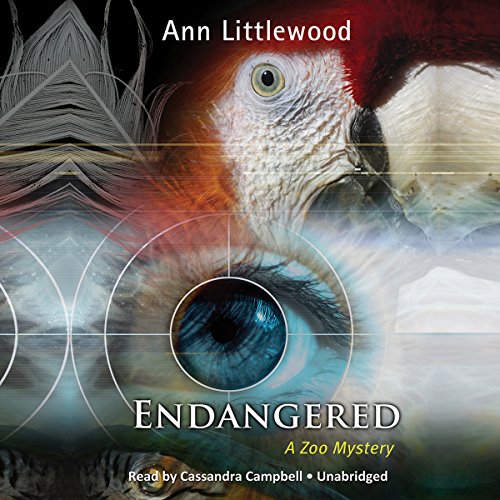 Zookeeper Iris Oakley is sent to a remote farm in Washington state to rescue animals found during a drug bust. While the marijuana-growing operation and the meth lab are the cops’ problem, the smuggling sideline is hers. Instead of pets, she finds exotic contraband: parrots and tortoises destined for sale to unscrupulous or unsuspecting collectors. The zoo’s facilities are full, and she ends up with two macaws shrieking in her basement.

An outraged Iris is determined to break the criminal pipeline that snatches rare animals from the wild and leaves them neglected in old barns. Then she discovers a woman who escaped the bust—dead. Iris has stumbled onto a violent crime, something far too dangerous for a widow with a young son. But it’s too late to untangle herself. Two brothers from the farm, both murder suspects, invade her home, demanding information she doesn’t have. Iris flees with her child, but soon her only option is to go on the offensive. However, people she counts on are not who they claim to be. Then a friend is shot during a break-in at the zoo and may not survive.

Hunting for the brothers, Iris sorts through baffling clues and discovers secrets old and new. Why steal an ordinary drinking glass? Why do the brothers think she knows where their father’s fortune is hidden? Could the noisy parrots be privy to some crucial information? She realizes a key piece of this puzzle is missing, but finding it means confronting a determined killer.

Ann Littlewood worked for the Oregon Zoo for twelve years as a zookeeper before beginning a career in writing. She is a lifelong environmentalist and a volunteer with the Audubon Society of Portland.

I have read the previous books in this series and enjoyed them. When this book came out I happily bought it. Cassandra Campbell's soothing voice saved the day. Ann Littlewood wrote a nice story but it was a bit predictable. Half way through the book, I had the mystery solved. However, I didn't mind finishing the story to see how it all unfolded because Campbell really did a nice job with the story and all of its characters. Littlewood is also very good at throwing in a few surprising twist and turns. This is a good book to listen to while shopping, doing errands or driving to work.

This was a suspenseful mystery that really required no time at all to pull me in. I have read both of the previous books in this series and thoroughly enjoyed them all. Ann Littlewood and Cassandra Campbell are a winning combination for an entertaining story.

Another "Zoo Done It" from Ann Littlewood!

If you could sum up Endangered in three words, what would they be?

What was one of the most memorable moments of Endangered?

When the lead character Iris Oakly describes the facility used by wildlife smugglers. Great visual picture of the terrible conditions for the poor creatures.

There were many. This is a story which is built on lots of information and character development. The plot is woven in a way that each scene is important to the final conclusion.

If I'd had that many hours to do so.

This is the third in Ann Littlewood's series of Zoo Mysteries. Murder and intrigue are interlaced with her knowledge of zoos and animal conservation. This book deals with the illegal importation and sales of exotic animals and the dedicated people trying to investigate and stop it. Can't wait for the next in this series to see what her zoo keeper heroine takes on next!

Additional note - this is the first of these books which I chose to listen to instead of read. Cassandra Campbell is new to me as a narrator and did an excellent job. I'm adding her to my list of narrators to look for.