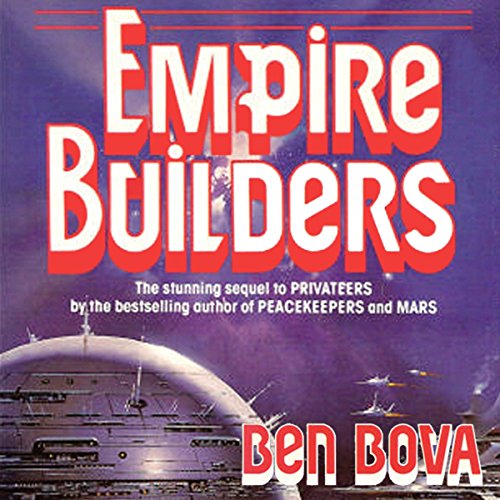 Dan Randolph never plays by the rules. A hell-raising maverick with no patience for fools, he is admired by his friends, feared by his enemies, and desired by the world's loveliest women. Acting as a 21st privateer, Randolph broke the political strangle-hold on space exploration, and became one of the world's richest men in the bargain.

Now an ecological crisis threatens Earth—and the same politicians that Randolph outwitted the first time want to impose a world dictatorship to deal with it.

Dan Randolph knows that the answer lies in more human freedom, not less—and in the boundless resources of space. But can he stay free long enough to give the world that chance?

©1993 Ben Bova (P)2010 Blackstone Audio, Inc.
Fantascienza tecnologica Fantasy
Mostra di più Mostra meno
"I believe that by far the science fiction author who will have the greatest effect on the science fiction world, and the world as a whole, is Ben Bova." (Ray Bradbury)
“Solid action-adventure/politicking/consciousness-raising from a veteran pro.” ( Kirkus Reviews)
"A rollicking good read!" ( Starlog)

And excellent book and hard to stop listen to

This is the second book about Dan Randolph even if it was writte well before Powersat.

The earth is heading towards a greenhouse cliff, a sudden climate change that will destroy much of the planet in ten years if something isn't done soon. The ice caps will melt. Cities will be flooded. Millions will die. When Randolph tries to let people know what's going on and try to help orchestrate a plan to avoid this catastrophe, government officials from the Global Economic Council (the GEC) confiscate his company, imprison him, and silence his scientific team.

The story continues and as usual it quite good and i find the book hard to put down, or stop listen to if you, like me listen to the audio book.

Stefan Rudnicki does an very excellent job adjusting his voice to each of the characters so you get a god idea of who speach. Speech tags become redundant. He captures a variety of accents well, and the voices match the personalities. He tries hard to get the Japanese right, but it doesn't roll off his tongue well.

Its even a bit scary to think that this book was written back in 1993 and quite well talks about some of the problems we have been facing today. The tsunamis in Indonesia and the flooding of New Orleans.

Another keeper from Ben Bova

Would you listen to Empire Builders again? Why?

Yes, I would listens again, I enjoyed this book

What other book might you compare Empire Builders to and why?

I think I could compare this title to the Orion series, there is a lot of space travel and exploration in both

I like Stefan Rudnicki, he is a very good narrator for truck drivers because he keeps his voice at a fairly constant volume, which is nice because I don't have to keep fooling with the volume control while I'm driving

No, I'm generally not an emotional person

Stephan Rudnicki is one of my favorite narrators, and he did his usual excellent narration here. Easy to listen to, easy to distinguish different characters, just the right amount of tension. The story itself drags a bit at times; too many meetings! I did enjoy how Dan managed to get out if situations that did not seem to be survivable so many times! An interesting story, with a definite environmental theme.

Although most of this "Grand Tour" series is free in my audible plus library, I’ve lost interest, at least for now. The books in this "series" are all stand-alone, although some of the key characters from Powersat are also key characters in this book. I may give another book from this series a chance somewhere down the road, but this one really put me off.

As always, Stefan Rudnicki is excellent in his narration.

Too much PC crap to even continue with this series. Some of the dumbest climate change scenario's ever postulated. The first book in the series was better so I thought i would try another, but I can't take any more of this.

I just got so wound up in Dan's situations I couldn't stop listening. Stefan Rudnicki did his usual job of using different voices with each character.....outstanding!

THis "enviromentality" really shows in this one. A little naïve and over steps the climate change logic here. But it does set the stage for his grand tour. Listen only for background information after listening to Powersat and continue on with the Grand Tour books. Stefan Rudnicki preforms this and does it very well.

Author could use a double damn thesaurus. You’ll see what I mean if you listen.

there are inconsistencies in the back stories from book to book and it does not make any sense as to why, but it is annoying.

It’s a story that while spot on with its green house gas issues was showing its age with how women are treated. Don’t even get me started on the Australian accent, it seems that a large number of narrators struggle with Australian & New Zealand accents, this effort was truly horrible. I had to keep skipping ahead.

Strong, solid Ben Bova, though not ground breaking. A great performance by Stefan Rudnicki, yet the story takes a while to really get underway. Once it does, Empire Builders is very good, however the first half is a little tedious.
Overall, very good.