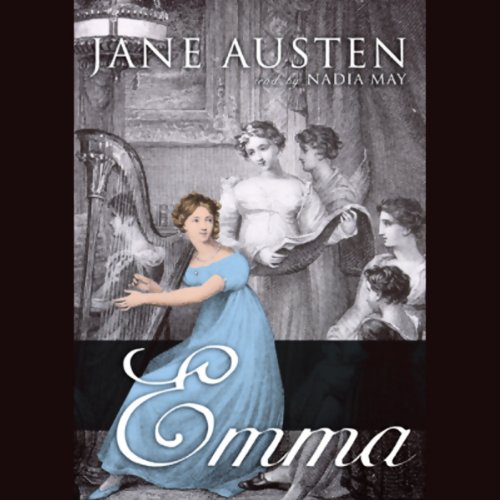 First published in 1816 and generally considered Jane Austen's finest work, Emma is a humorous portrayal of a heroine whose injudicious interferences in the life of a young parlour-boarder in a neighboring village often lead to substantial mortification. Austen brings to life a myriad of engaging characters as she presents a mixture of social classes as she did in Pride and Prejudice. Her two greatest comic characters are part of Emma's machinations: the eccentric Mr. Woodhouse and the quintessential bore, Miss Bates.

Delightfully funny, Emma displays the shrewd wit and delicate irony which made Jane Austen a master of the English novel. Although Austen thought that only she would like her witty, fanciful, self-deluded heroine, Emma has gained the affection of generations of readers.

One of the best!

One of Austen's best as far as I am concerned, and Nadia May is one of the finest narrators in the business.

Emma is Austen's most wrong-headed character, and her development into a woman needing forgiveness and becoming truly lovable is deeply engaging. The wonderful Nadia May reads flawlessly and, as ever, does justice to this excellent novel.

What a listen! This audiobook sparkles with life. The voices and accents are well done and i felt that it really does justice to Jane Austen.

Poor Emma, She Had it all Figured Out, Wrong

One of my favorite AAM (Austen Awkward Moment) occurred when the newly married Mr. Elton and Mrs. Elton (the woman he married) is thrown together with Miss Harriet Smith (the woman he was supposed to marry) and Miss Emma Woodhouse (the woman he wanted to marry). I struck with the different behavior by Austen's rejected suitors: Mr. Elton (E), Mr. Knightly (E who thought Emma was partial to Mr. Frank Churchill) Mr. Darcy (P&P) and Capt Wentworth (P). The latter three became determined and better persons, the former turned sour. Their real characters are revealed under adversity. Of course, one can go on for some considerable time with this theme alone in Austen novels.

Poor Emma, she thought she had a pretty good fix on things and found out that she didnt even know herself. I have read criticism (more like catty remarks) about Emma as snobby and elitist. I reject this view; I understand it but still reject it. Miss Emma Woodhouse was mistress of her world. She knew and embraced the strict rules governing it. She didnt make the rules but she lived by them. Unfortunately, for her, the rules were changing. Agrarianism and feudalism were giving way to city life and manufacturing evident by the newly rich Mr. and Mrs. Coles and other newly wealthy neighbors thrust upon her notice. Mr. Knightly, among others, deals with the new rules (unwritten BTW) and neighbors much better than Emma.

One confession: reading or listening, I often skip over the parts with Miss Bates. HoweverShe is a good, well meaning soul, funny and Nadia May does a splendid job bringing her to life Still, I can only tolerate her in very small doses. If I was stuck with her everyday like that poor Jane Fairfax, I would go absolutely off my rocker. I am reminded that I know many Miss Bates. I also know many Mrs. Eltons. After thinking that thought, Miss Bates is not so bad after all.

Literally painful to listen to

How could I NOT love this book? I adore Jane Austen and thoroughly enjoyed two versions of the movie of this tale. I was so very much looking forward to listening to it on a long drive.

Perhaps I am an illiterate dolt, but after two hours of enduring seemingly endless and pointless dialog with nasal high-pitched female voices droning on like chickens cackling (about NOTHING of substance and shallow characters I cared absolutely nothing about) I actually deleted this from my iPod. This feels like sacrilege, and I am sure there will be literary penance to be paid for such an abominable act. But perhaps I can save someone else the torture.

The most pointless book

There is nothing to be gained from this book but drivel. It's romcom from the 1900's with less excitement. If it's your fantasy to be a condescending shrew then this is the book for you!

A Matchmaker Meets Her Match!

Each year, I read or listen to at least one of Jane Austen's novels, novellas, or letters. It had been some time since I picked up Emma so I was pleased to one-click the free version on Amazon and then upgrade for a dollar to the audio which was produced by Blackstone. I am hit or miss with their narrators, but Nadia May was fabulous. She had a good storytelling tone and pace, voiced the characters well, and was an overall good match for the story.

Emma is a wonderful novel set in an English Regency village. The plot is utterly character-driven and centers around a young, beautiful, woman of the gentry class who takes up matchmaking and improving an impoverished girl of obscure connections against the advice of family friend George Knightley all to rather interesting results.

And there ends my usual set up for a review. This book has plenty of reviews so I'm just going to ramble on about what jumped out at me on this latest experience with the book.

Austen said that Emma is a character that only she would love. That has always struck me. Emma happens to be liked by many even if she isn't their top favorite Austen heroine. Unfortunately, I have always been one of the crowd she was talking about who has never been enamored with Emma. I have read Emma a few times and love the overall novel and some aspects of Emma the heroine, but I can't get past her mistake of treating Harriet Martin like a project to alleviate her ennui. But, she has grown on me over the years. In fact, like all of Austen's heroines, I can see a little of myself in her particularly when I was her young age with mostly my wants and desires ruling my actions.

And, there, I suppose, I have learned to cut Emma some slack even if I still grind my teeth about toying with Harriet's future happiness. I can see just how sheltered and unsophisticated she is even though she is full of womanly grace, has pleasing manners, and comes from wealth and status. She's lived in a village all her life and doesn't travel to broaden her mind and experience. She doesn't read or spend time around learned people with the exception of Mr. Knightley who she dismisses as overly critical. The village doesn't offer her any real peers so there's a big fish in a small pond thing going on. No one else does anything, but praise her. That, right there- no one to hold up a true mirror to her- is what she really lacked. It is over the course of the novel that Emma realizes her folly when the influx of newcomers like Jane Fairfax, Mr. Elton, Frank Churchill, and Mrs. Elton, push her out of complacency and this brings changes showing she is not hopeless and is worthy of the gentleman who quietly waits for her to come into her own.

Each time I read this, something different stands out. This time, it was Mr. Woodhouse. While Emma's high-handedness with Harriet gets me a little irritated, it is Mr. Woodhouse- and Frank Churchill, I'll add- who get me seriously cranky. I know we all see Mr. Bennet as a lazy dad, Sir Walter as a terrible vain sort, and Sir Thomas as practically an absentee one from Austen's other novels, but Mr. Woodhouse tends to get a pass because of his illness and general silliness. However, when I thought about who could have been a larger influence on Emma other than just Mr. Knightley, it was Mr. Woodhouse who has her duty and show of respect. He can't care or see past his freakouts over his illnesses. He's silly so we laugh at him, but he's just as selfish and lazy as Mr. Bennet and Sir Walter and is lucky that Emma's going astray was not in the nature of Lydia Bennet's nor that her disposition wasn't that of Elizabeth Elliot's.

So, I had another enjoyable time with Austen's classic and learned to appreciate more about her writing through these characters going about their lives in the village of Highbury. I enjoyed seeing a young, promising heroine grow and appreciating the magnificence of Austen's Mr. George Knightley. New to me narrator, Nadia May, will be one I watch for.

I love Jane Austen, love this story, and love listening to Nadia May. So why couldn't I listen to this book? I'm not sure if it was the tempo (too fast!), the voices she chose for the characters (too sharp and high) or a combination of the two, but this audiobook was incredibly irritating to listen to. I tried several times but finally gave up. The only reason I could give this three stars was that I know the book itself was good.

Emma is excellently narrated. The characters and storyline are really brought to life. Great audio quality, too.

Rated for the narrator

Couldn't finish it. I love Emma, but the narrator was not pleasant to listen to which of course negates the usefulness of an audiobook. I will stick with the other download I chose for a full version as well as the radio-show style narrated by Emma Thompson for an abridged version.

There's a huge amount of Jane Austen current and faced with every Tom, Dick and Gwynneth, I thought it a good idea to go back to the originals and read them end to end from start to finish. Flagging in places, hitting on Emma it is apparent that the apotheosis of so much of Jane Austen's work rests on the character and interplay of Emma. It is a world out of this world, a place to turn to and relax and dream - the quality and wit, the depth of the shallowness - great stuff.

Another wonderful and insightful

A master piece spoiled by the narrator.

Emma is a wonderful novel and too well known to describe but the American narrater has slightly slurry diction which is off putting.