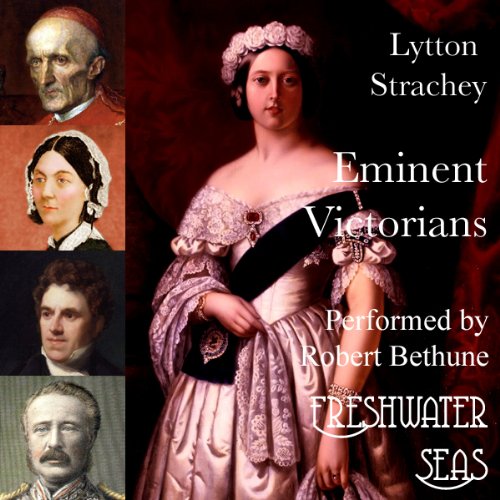 When Lytton Strachey published Emininent Victorians, he took the general perception of the Victorian age among English-speaking readers and turned it upside-down. Four of the most eminent and idealized heroic figures of the Victorian age came under his witty and unsparing gaze and emerged, astonishingly enough, as human beings.

His study of one of the most revered prelates in England, Cardinal Manning, reveals a profound and courageous religious mind combined with the conniving and ruthless soul of a born politician. His dissection of the life of Florence Nightingale shows her both as the Lady of the Lamp and as a woman of steely backbone and adamantine determination, who not only cared for wounded and sick soldiers with complete dedication and solicitude, but who wreaked holy hell on any bureaucrat or governmental office that tried to get in her way.

When Strachey is finished with Dr. Arnold, we understand him as a revolutionary reformer of English education and as a first-rate prig. And when Strachey finishes leading us through the life of General George Gordon, we come away having known him both as a man of extraordinary courage and as a near-lunatic.

Fascinating, witty, insightful and provoking, these four biographical studies single-handedly revived the art of biography in the English language.

"Mr. Lytton Strachey's Eminent Victorians has had, I suppose, the most instant success that any book of account has won in this generation. Some of Mr. Strachey's incidental portraits are of astonishing brilliancy, notably that of Mr. Gladstone, and the book is sure of long life. This it will owe to its felicity of style and its finish and delicacy of moulding, no less than to its cynical wit and its perfectly serious and critical intention." ( The Nation, upon the original publication of the book)
"A brilliant and extraordinarily witty book. Mr. Strachey's method of presenting his characters is both masterly and subtle. His purpose is to penetrate into the most hidden depths of his sitters' characters. There is something almost uncanny in the author's detachment." ( The Times, London, upon the original publication of the book)
"A brilliant book has recently appeared which illustrates in very vigorous and striking fashion the interval which seems to divide the 20th century from the 19th. Mr. Lytton Strachey's book has attained a celebrity quite remarkable for literary work produced in times of war. There is no doubt as to its literary merits." ( Daily Telegraph, upon the original publication of the book)

Please listen to the sample before you buy this!

What disappointed you about Eminent Victorians?

I'm a veteran Audible listener, with over 300 books under by belt, and I have to say that this has been the only one for which I have been tempted to ask for a refund. The narrator is excruciating to listen to. He has the most affected, odd and irritating accent and manner I have ever heard. I kept thinking I had heard this voice somewhere else, and it finally dawned on me that is was Mr. Burns on The Simpsons. He variably mispronounces frequently occurring words like "schism" and has the singular pronunciation of the words "England" and "English", pronouncing the "E" as in "egg". I was born and raised in the U.S. and educated in England and have never heard this peculiar affectation. I have read the book, and it is a classic commentary on Victorian England. I can try to forgive not having a British narrator, but to have an American narrator that employs a heretofore unknown accent while at the same time completely bungling every English proper name (e.g. "Gladstone"}, is simply unforgivable. I hate to be harsh, but caveat emptor: this Audible pick is a waste of time and money.

What was one of the most memorable moments of Eminent Victorians?

When I finally gave up on it.

In every way possible. Can there really be an actual person who talks this way?

It sounds like a Drunk narcissist is reading this

Audible gets worse and worse. I thought the travesty of the so called narrator Mary Sarah reading in her nasal, irritating phony English accent he brilliant Barbara Pym and Jane Austen was the lowest that this company could go, but the the narrator of this classic is absolutely appalling. disgusting! What the hell is wrong with the producers and editors at Audible?

The wit of these several biographies surprised me. The reader showed his intelligence and understanding of the material, which is not always the case.
But why not a British narrator? Sri excellent though!

This is one of the most beautifully written biographical works you're ever likely to come across. Sadly it's read by a man who sounds like a combination Dr Bunsen Honeydew from The Muppets and Mr Burns from The Simpsons. Even if you can get over the voice, the affected delivery of all quoted speech and the narrator's total inability to appreciate that bits of the book are supposed to be funny, huge numbers of the words are mispronounced. And not just the difficult ones - we're talking words like 'England', 'woman', 'indefatigable', 'Salisbury', 'Gladstone', 'Derbyshire' and hundreds of others. A brilliant book ruined by a dreadful narrator.