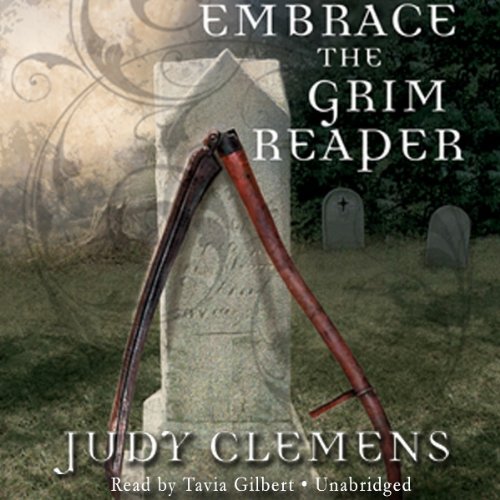 After a near fatal car accident, Casey Maldonado's life is over. So she packs up, puts her house on the market, and leaves town, her only companion Death, who won't take her but won't leave her alone.

Casey stops in Clymer, a town in upheaval. The town's appliance factory and main employer, a company called HomeMaker, is planning to move to Mexico. Not only that, but the town has been rocked by the suicide of a beloved single mother. However, many citizens don't believe the verdict of suicide at all.

Death encourages Casey to investigate, and she uncovers information that points to the factory. Did the victim truly have the means, as she claimed, to keep the factory from leaving town? Is it possible that her death was a cover-up?

I think this is one of the most surprising good books I have listened to in a while. I am currently up tp date on all of my book series, and I was looking for something to get me through my morning commute of 40 min.. This was perfect. I have already bought the next book.

Where does Embrace the Grim Reaper rank among all the audiobooks you’ve listened to so far?

Interesting idea to have Death as a companion. Main character is interesting to get to know. Why is Death her companion? And what is her purpose? Worth the read and I'll be keen to read the rest of the series.

Ending Left me Unsatisfied and Upset

I was enjoying this book until I reached the end....then it all fell apart.

Here's what I liked:
1. The owners of the bed and breakfast
2. Good pacing
3. Casey's backstory
4. Love, Love, Love Tavia Gilbert. She's the reason I originally purchased this book.
5. Death/Grim Reaper was awesome

What I absolutely hated:

The last 1/3 of the book. Casey is presented as a law abiding citizen even though she's on the run from her past. So when she accidentally kills a known criminal in an obvious situation of self-defense, what's her reaction??? To go on the run and have a warrant out for her arrest!! Why??? And because of that decision it also ruined the end of the book when it came to the big reveal of the killer. Only 2 other people besides Casey was there when the killer is revealed. One of them tells Casey that they'll take care of it, she needs to leave town. And that's how the book ends. You never find out if the killer is arrested or brought to justice. The town never learns that the murder victim didn't commit suicide and the main character goes on the run for a stupid reason!!

As someone who watches and reads murder mysteries I enjoy the sense of justice at the end of the story and I want to see it happen! Even if it's just an arrest! This book completely denies me this and then tries to convince me that the main character had no choice but to become a fugitive. I was left feeling betrayed and upset.

If that type of ending doesn't bother you then the book is decent. However, I won't be continuing the series myself.

I just wanted it to be over...

I listened to part of this and lost a interest in the story, characters early on so I did not even finish it.

I didnt even care enough to wonder how it could have been better.

I'm blown away by this new series. I love the idea of Death as a character. Casey is going through such a rough time and it's very easy to identify with her character. 5 stars is not enough for this book.

Not a great story line

I love Tavia Gilbert, it was hard to get through the story. there was no guidance and it never even got to a point that would make me want to read the next. I stuck with it because Tavia is great but I won't be listening to the next book