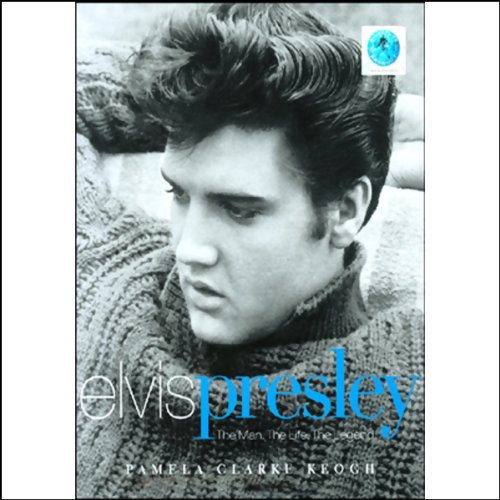 It was that voice, those eyes, that hair, the cars, the girls. Elvis Presley revolutionized American pop culture when, at age 21, he became a modern superstar. A Memphis Beau Brummel even before he found fame, Elvis had a personal style that, like his music, had an immediate impact on his audience that continues to influence us today.

"Elvis Presley is the greatest cultural force in the twentieth century," proclaimed Leonard Bernstein. The author writes, "His appearance on Ed Sullivan ripped the 1950s in half." By any measure, Presley's life was remarkable. From his modest beginnings in a two-room house to his meteoric rise to international fame, everything about his life, from his outsized talent to his car collection, clamored for attention. And he got it.

Keogh compellingly examines Elvis' life and style to reveal the generous, complex, spiritual man behind the 14-karat-gold sunglasses and answers the question, "Why does Elvis matter?"

"Before Elvis there was nothing." (John Lennon)
"Appealing....[An] intimate portrait of a man who was larger than life." (Publishers Weekly)

An odd take on a complex man

In order to understand the odd facets of Elvis' life and style that the author chose to focus on (most disturbingly, constant comparisons of Elvis and Priscilla to Jackie and JFK), you must realize that her last two bios were on Jackie O and Audrey Hepburn. This is why she treats Elvis like a fashion plate to be examined in the same light as Coco Chanel rather than as a musical genius. Still, there is enough relevant facts on Elvis that it is worth the listen. You can tell that the author tows the party line on alot of subjects, but that is the risk you take when you have the cooperation of those who knew the subject. Not a gritty tell all by any means, but and interesting look at a man and an era.

Is Elvis just his clothes?

I realize that writing the biography of the King must be very difficult, given the complexity and richness of his life, but I must say I was disappointed by this book. There’s a lot of information imbalance...a whole lot is said about Elvis’s childhood and early years, (actually very interesting), we get a huge amount of details on his clothes (kind of boring, almost as if his beauty and looks were all there was to the King of rock and roll), while other aspects of his life go almost unmentioned. Above all, the writer dismisses the last 2 years of his life in about 20 minutes reading. If you’re hoping to find possible explanations or opinions as to why Elvis changed so much, and headed toward self-destruction, you won’t find much in this book. The best the author can say about this is that in his last year of life, Elvis was not himself, and nobody knows why.....
Some aspects are covered very nicely, like his childhood or his relationship to his Mom, but other important facts and people aren’t even mentioned, like his last girlfriend, singer Kathy Westmoreland (who was one of his closest friends), etc. His separation from Priscilla is also dismissed in a few sentences, as if it would have no big consequence on him or her... Lots is said about his promiscuous life, but the fact he was a gentleman, and many of his dates were actually only friends, is not even brought up, contrary to what I’ve read elsewhere.
Elvis’s spiritual side does come across well, but the long and repetitive descriptions of his clothes are twice as prevalent in the book.

One positive note: the reader is excellent!!

It can be a pleasant reading but don’t expect it to be even close to exhaustive. The book is very relaxing, as the author never goes into details about the things that actually bothered Elvis at the end, contributing to his early tragic death, facts that are certainly very sad to hear for those of us who love him.

The BIG book of Elvis!

After wrapping up the excellent "Beautiful Mind" bio of John Nash I was so impressed with the narrator (Anna Fields) that I went looking for another bio from the exact same narrator, and found it with this fairly extensive portrait of Elvis' life. Fields does a good job with providing just the right amount of "twag" when required to keep it all moving, a tough job for book of this length. Punctutated with colorful backroom conversations recounted from various consorts to the King, and equal parts history and personal recollections, author Keogh captures a glimpse of the huge talent and inner clockworks of this amazing one-of-a-kind fellow whose life - and legend - seemed to outgrow even him.

4 whatever this listen lacks it is properly THE best read I have done since my all time fave EP book; "Elvis & Gladys" by Elaine Dundy hit the shelves 16 years ago! I recommend Pamala Clarke Keogh and - Anna Fields! HP, Denmark.....

This is one of the best biographies I've read about Elvis Presley. It is all at once thrilling, transparent, respectful, and yet heartbreaking. A hagiography in the best sense that tells the story of a talent that changed the world.

the book was okay. kind of boring. hated the voice of the person reading it.

Sadly Elvis”s life has been dissected by so many trying to make a buck,nothing much new could be written. But at least it sounded like it was written by a friend.

Amazing story!
Had me laughing, singing and crying at times.
Loved it.
Narrator was fabulous.

Before i listend to this book, i was of the opinion that there was absolutely nothing this book could tell me, that i probaby didnt already know about Elvis. And i was right..kinda..However the narrator tells the story with such style, such skill and humour. It was like listening about the man for the very first time. Would i recommend this book to yawl...hell yeah...utterly awesone.