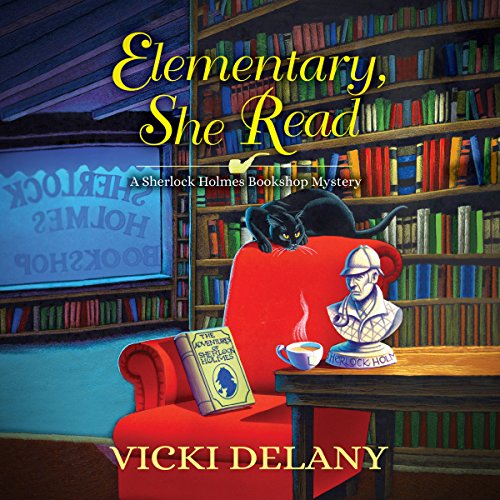 Gemma Doyle, a transplanted Englishwoman, has returned to the quaint town of West London on Cape Cod to manage her great uncle Arthur's Sherlock Holmes Bookshop and Emporium. The shop - located at 222 Baker Street - specializes in the Holmes canon and pastiche and is also the home of Moriarty the cat.

When Gemma finds a rare and potentially valuable magazine containing the first Sherlock Holmes story hidden in the bookshop, she and her friend Jayne (who runs the adjoining Mrs. Hudson's Tea Room) set off to find the owner, only to stumble upon a dead body. The highly perceptive Gemma is the police's first suspect, so she puts her consummate powers of deduction to work to clear her name, investigating a handsome rare books expert, the dead woman's suspiciously unmoved son, and a whole family of greedy characters desperate to cash in on their inheritance.

But when Gemma and Jayne accidentally place themselves at a second murder scene, it's a race to uncover the truth before the detectives lock them up for good.

Good story, characters well developed. Excellent narration. There was no sex and no bad language. There was also no graphic violence. In other words, perfect cozy mystery. Searching now for the next book in this series,

Gemma Doyle, who owns the Sherlock Holmes Book Shop and Emporium, located at 220 Baker St., West London in Massachusetts, contains the same observation skills as her detective hero in Elementary, She Read by Vicki Delany. Noticing every detail around her, Gemma spots a magazine that does not belong to the shop amid the books. Looking at it, she gets excited but alarmed to discover what looks like a first edition of the magazine that carried A Study in Scarlet, the first Sherlock Holmes book, which is the most valuable magazine in the world, with only 31 in existence. Using her deductive skills, Gemma figures out who left the magazine there and tracks the woman to a local hotel, where she and her business partner, Jane, find the woman strangled.

As the lead detective arrives on the scene, Gemma is startled to see that he is Ryan Ashburton, the man she almost married, who moved to Boston but was lured back to West London for the lead detective job. His junior detective, Louise Estrada, shows lots of suspicion toward Gemma's seemingly unreasonable knowledge of the case and wants to arrest Gemma. Thus, Gemma decides she must use her incredible deductive skills to locate the killer before she and Jane get locked up for the crime themselves.

Especially since the intense popularity of the TV series Sherlock, there has been a rekindling of interest in Sherlock Holmes, spurring the creation of many pastiches on this detective. In general, I dislike such works, as they seem to rely on the fame of the name to make themselves successful instead of creativity of writing. However, this book has turned out to be an exception to my general distrust, and I am glad to have read it.

Gemma seems to channel Holmes's genius without trying to be him. I especially enjoyed the fact that Gemma narrates the book, giving her detailed observations of everything and everyone she encounters. With the exception of a few Sherlock Holmes stories towards the very end of Conan Doyle's life, it is extremely rare to find the extraordinary detective narrate. Instead, almost all such books and stories follow the same pattern of having the much less cerebral assistant tell the story in order to make the detective seem particularly remarkable. Thus, this book is very refreshing in showing us every step of her mental processes. In addition, Gemma shows a greater degree of humanity than Holmes ever does.

I did find a couple problems with details of this book. First, it contains periodic inconsistent details, such as saying that Gemma went home to walk her dog and then met Jane without having gone home after work. This is sloppy, something the author and her editor(s) should have noticed, especially when the inconsistencies occur within a minute of each other. It is also weird for two characters to share the same name. The bartender, who is a minor character, is named Ryan, the same name as the detective in the case. This doesn't really cause any confusion, but it does seem strange to me when the author could have chosen so many other names.

I appreciated the audio performance of Kelly Clare, who does a terrific job with accents. My experience is that British narrators often have difficulty with most American accents, and accents figure importantly into this book, as Gemma comments on people's accents. However, Clare does a good job of adjusting her character accents. She also is well-suited to play the part of Gemma.

Despite my stated concerns, I really loved Elementary, She Read. People familiar with the Sherlock Holmes books and stories will appreciate this book the most. Delany clearly is well-versed in not just them, but also the various pastiches and especially likes to reference the Mary Russell series by Laurie R. King, which made me smile. I give this book five stars!

A great read, but only for some

This is one of those books that you will either love or hate. Personally, I couldn’t put it down.

Looking at the reviews of this book, they seem to be scattered all over the map and I can understand why, even if I don’t agree with some of the opinions.

This book feels like it was written by a real Sherlock fan which can be good or a bad thing depending on your point of view.

Delany does a great job of creating a Sherlockian character without actually using The Great Detective himself. She is observant, detail oriented and very matter-of-fact. She uses abductive reason to come up with solutions and is fairly knowledgeable and intelligent. She also has no filter and lacks social skills. As a result, she can also be very crass and standoffish. She’s also not above lying or using deceit to achieve her goal.

I think this is the lynchpin of whether a reader will like the book or not; because the main character is not very associable. But I don’t think she was supposed to be.

The author obviously wanted to create her own version of Sherlock, which I think she succeeded in doing better than most. If you’ve read the original Holmes canon, you’ll understand what I mean. Holmes himself also lacked a filter, often proclaiming things in a crass manner. On learning of the Copernican Theory from Watson he replies that “Now that I know it, I shall do the best to forget it!” And basically tells Watson that it’s completely useless information to him.

So to that extent, I think the author succeeded. But I also think this may turn a lot of readers away, especially since most Cozy Mystery heroines are nice, cheerful and get along with nearly everyone in the community. Gemma isn’t quite the exact opposite of that, but she’s close.

As for the mystery itself, it’s fairly well structured. With a nice tie into the history of the stories of Conan Doyle. The twist at the end is both poignant and makes perfect sense once explained.

All of the supporting cast are likable and contributes to the story, no one seems to be taking up lines just for the sake of it.

There are a couple writing issues. Like having a supporting character and a background character having the same name but nothing that takes away from the overall story.

Another nice touch to this series is that the author cites other, real Sherlock contemporary novels. As the protagonist owns a bookstore it makes sense and helps to make a more immersive story. It’s also a nice way to learn about other books to read. Though this happens more often in later novels in the series.

Overall, I would recommend this book to Sherlock fans and mystery fans that can handle a slightly abrasive protagonist.

Being a Sherlock Holmes and cozy mystery fan, I decided to give this series a try. The plot was interesting and made you think about “fairness” but the main character, Gemma Doyle, is just not likable. I understand the author’s attempt to give Gemma the same fabled powers of observation as Sherlock Holmes but her demeanor is off-putting and brusque. I did not find myself rooting for her to win. The other characters held my interest more than Gemma. I enjoyed the reader, Kelly Clare. Since the plot had a few fun twists and turns I might be willing to give the second book a chance.

I am always up for a Sherlock "Holmesian" story, and this one was enjoyable, but not so engaging that I wish to pursue the series. Narrator does an excellent job and the story is makes an excellent use of parts of the Homes Canon, but I really did not connect with the characters in a way that makes me want to pursue it further.

I expected a light, fun mystery. Instead, this was repetitive and tedious. The worst part, however, was the thoroughly unlikable heroine—a carbon copy of Bones or House but without any redeeming charms.

This is a good solid cozy, with great narration. I loved the setting in a Holmes themed bookstore on Cape Cod. My only complaint was the MC had an ego that wouldn't quit, which got really irritating at times.

Reviews are totally wrong, this title is terrible.

Main character and to an extent the story is totally unlikable and absurd. Don’t waste your time. You have been warned.

I liked the cleverness of tying this story to the overall Holmes canon, as lead character owns and operates a Holmes-related book store. Good story progression. The primary characters and the writing seem aimed at the female teenager market, but I enjoyed it nonetheless...but no so much that I'm inclined to listen to the next books in the series. Enjoyably narrated.