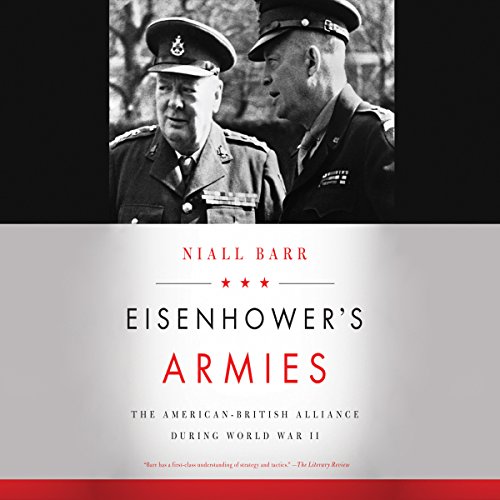 Eisenhower's Armies is the story of two very different armies learning to live, work, and fight together even in the face of serious strategic disagreements. The Anglo-American relationship from 1941-1945 proved to be the most effective military alliance in history. Yet there were also constant tensions and disagreements that threatened to pull the alliance apart. This book highlights why the unprecedented level of cooperation between the very different American and British forces eventually led to victory but also emphasizes the tensions and controversies, which inevitably arose.

Based on considerable archival research on both sides of the Atlantic. The book also looks back and demonstrates how the legacy of previous experience shaped the decisions of the war.

Should be named Eisenhower's Generals.

For those who aren't familiar with the Second World War, I would recommend this book as a starter book to the generals who led the war from the western perspective, Eisenhower in particular.

For more experienced readers this isn't much more than a general retelling of the landings in Africa, Italy, and France; the drama with the French leaders of Vichy France quibbling for power, Eisenhower constantly having to reaffirm his opinions to higher ups, and of course everyone's favorite: Monty.

If you're looking for a deeper, more personal boots on the ground, everyday life as a soldier, I wouldn't recommend this book. This is a more political overview of events behind the scenes as the fighting occurred.

The best parts of the book describe instances when American and British troops either worked together or fought side by side. It goes into the clash of cultures a bit and what the troops thought of their cousins across the pond.

If the book had focused more on these interactions instead of retelling for the millionth time how Montgomery exaggerated to the press I would have rated the book higher.

One of the unsung efforts during World War II

Mr Barr’s book is a look at how the Western Allies attempted to improve the efficiency of the alliance by removing or changing those things that prevented them from working together smoothly in Europe during World War II. It is easy to believe that, since the Americans and British both speak English and since they share a common heritage, that their militaries would mesh almost seamlessly, but there were multiple problems that prevented them from working together as well as they might, including the English language itself since the British and American forms of the language, although very similar, could easily lead to confusion and disharmony. One simple example is the use of the English term “tabled” as it referred to items being considered in a discussion. The term means one thing in the US and the complete opposite in Great Britain. This book concerns itself with the Allied armies in Europe and is not concerned with the effort in the Pacific, which was largely American in any case.

In addition, the views of the two main armies, British and American, concerning the other were not positive. Americans thought of the British as being too traditional and unwilling to learn from changed circumstances and the British thought of the Americans as inexperienced and unwilling to learn from prior mistakes, especially if those mistakes were made by the British. Both were probably right. Many other problems existed between the two - they used different caliber ammunition, there was no commonality in the design of their tanks making the task of repair and supply much more difficult, the rations of the two armies were so different that Americans constantly complained if forced to eat British rations, military grades did not exactly parallel each other so officer seniority was often not easy to determine and the American view of British objectives were tinged with the belief that Great Britain wanted to reestablish their imperial colonies after the war and were designing strategy with that in mind rather than concentrating on attacking the destroying the German Army. And, of course, there was the issue that the American soldier was more highly paid and was being billeted in Great Britain in the buildup to the Normandy invasion while the British soldier was fighting and dying in North Africa and in Asia.

Much of the effort to solve these problems are not covered in other books which tend to concentrate on strategy and tactics rather than the behind-the-scenes work to make the alliance work more smoothly and easily. For example the Sherman Tank, which became the main tank used by the Western Allies in Europe, ended up being an amalgam of American engineering and British turret design, a fact that I did not learn from any other book I have read concerning the war. The book is also full of interesting and amusing anecdotes, one example being the story of an American soldier who ended up carrying a BAR (Browning Automatic Rifle, basically a light machine gun) but had no experience using it prior to deployment to Europe. When asked how he ended up with equipment he knew nothing about he responded that he had volunteered to be a “BAR man” when asked because he had run a bar in civilian life. While amusing, this tale also says something about the background and training of the American army and why the British considered them to be unprepared for the war. On the success side of the ledge the book discusses the creation of the combined airborne army made up of both British and American soldiers and the efforts to imbed British and American soldiers in the each other’s armies for a short time to familiarize each with the other and how this effort led to a greater understanding between the soldiers.

While the book covers the “nitty gritty” details of the efforts to coordinate and standardize the war effort, it also goes a long way toward understanding why officers like Generals Patton and Montgomery thought of the other as they did and how the British attempted to “promote” Eisenhower in an effort to make him a figurehead commander so they could have his deputies, almost all British, take over the actual running of the war.

This book was written by Niall Barr, a British academic and historian, and narrated by Stephen Crossley, a British actor, so the reader should expect this book to sound and feel British and it does. Unfortunately Mr Crossley’s narration leaves a great deal to be desired to the American ear and I speak as one who has listened to a great many Audible books by British narrators. His accent is very strong and was often a bit unpleasant to my ear. Nevertheless I found the material to be more interesting than I might have expected and more central to understanding why the war was fought as it was than a simple look at the material might have suggested. This book might appeal to those who already have an understanding of how the war was fought by explaining the “whys” of some of the actions (for example it clarifies why Patton was politically able to move his Army to Palermo and across the top of Sicily without being removed from his position for disobeying orders) and why the British and American high ranking officers gradually began to understand and appreciate each other during the fighting. One of the interesting items in the book is the British wish that a fighting American, specifically General Patton, had been in charge of the American landings in Italy rather than General Mark Clarke and thus shows the increasing British respect for the American Army as it learned its trade during the war.