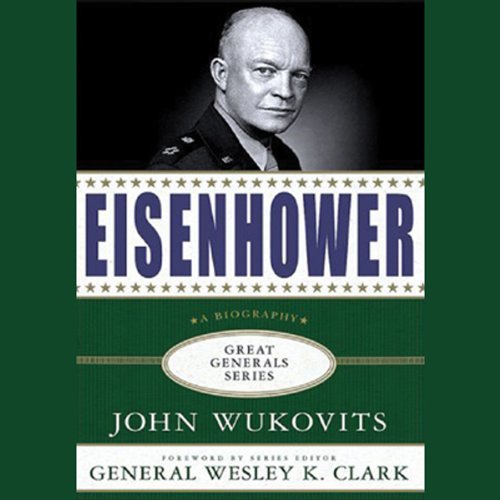 Eisenhower led the assault on the French coast at Normandy and held together the Allied units through the European campaign that followed. Wukovits follows Eisenhower's advocacy of the tank in the pre-war years, his friendships with George Patton and Fox Conner, his service in the Philippines with Douglas MacArthur, and his culminating role as supreme commander of Allied forces in Europe. He skillfully demonstrates how Eisenhower's evolution as a commander, his military doctrine, and his diplomatic skills are crucial to the understanding of modern warfare.

"Wukovits's book is excellently researched, but his greatest merit as an historian is a rare ability to make the past a real, living thing....A superior history of an intensely human man." (Robert Barr Smith, colonel, US Army [ret.])
"With his depth of research, insightful approach, and clarity of style, the author and military historian John Wukovits has managed to put a human face on one of the 20th-century's greatest figures and turn an historical icon into a flesh-and-blood human being." (Flint Whitlock, author of The Fighting First: The Untold Story of the Big Red One on D-Day)
"In his highly readable and concise style, John Wukovits has once again succeeded in packing a wealth of information into a single volume on the life of one of the greatest soldier-statesmen in history. He conveys the strength of character and innate leadership of Dwight Eisenhower in a manner which will captivate the reader." (Michael E. Haskew, editor, WWII History Magazine)

A great Man and General

This book gives you an excellent insight into a great man and general, who put duty and others ahead of his own interest. I am not sure the allied forces could have defeated Hitler in WW II if it weren't for this man who hew his strategic goal and stayed the course, even though he faced many challenges and hardships. You can see why the troops loved their Supreme Commmader.

My only issue was with the book itself. I have never experienced this before, but it seemed that there were numerous instances where there were repeats of material just presented. I don't think it was my MP3 player, because it never happened with other books or music.

Great and interesting story.
However multiple times paragraphs was reread. There is however nothing wrong with the audio quality or the reading.

I wouldn't recommend this audio title. The reader has a cadence that I found annoying and which made it difficult to stay focused on the content. I am not usually a biography reader so I can't say whether this was a good one other than I didn't feel like I gained adequate insight into Eisenhower's inner motivations and struggles.

Great man, great story, great performance. I would reccomend to all who seek to learn and be inspired.

Audio had some small sections that repeated for some reason. This is a technical issue and does not take away from the quality of the story or the performance of the narrator.