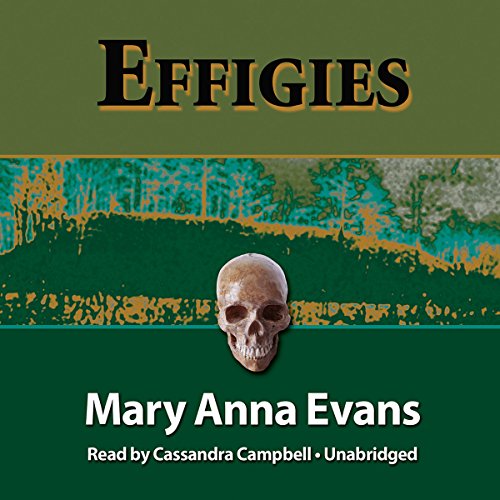 Archaeologist Faye Longchamp and her friend Joe Wolf Mantooth have traveled to Neshoba County, Mississippi, to help excavate a site near Nanih Waiya, the sacred mound where tradition says the Choctaw Nation was born. When farmer Carroll Calhoun refuses their request to investigate a nearby mound on his land, Faye and her colleagues are disappointed, but his next action breaks their hearts: He tries to bulldoze the huge relic to the ground. Faye and Joe rush to protect history - with their bodies, if necessary.

Soon the Choctaws arrive to defend the mound, and the farmer’s white and black neighbors come to defend his property rights. Though a popular young sheriff is able to defuse the situation, tempers are short.

But then that night, Calhoun is found dead, his throat sliced with a handmade stone blade. Was he killed by an archaeologist angered by his wanton destruction of history? Or, since local farmers have been plowing up stone tools like the murder weapon for centuries, did one of them take this chance to even the score with an old rival?

The sheriff is well aware that Faye and Joe were near the spot where Calhoun’s body was found and that their combined knowledge of stone tools is impressive. They had motive, means, and opportunity - but so does almost everyone in Neshoba County.

Mary Anna Evans has degrees in physics and engineering. She is the author of the award-winning Faye Longchamp mysteries.

©2006 Mary Anna Evans (P)2012 Blackstone Audio, Inc.
Poliziesco
Mostra di più Mostra meno
“We mystery lovers who’ve enjoyed Artifacts and then decided that Relics was even better may not believe this but Ms. Evans has done it again, and Effigies is the best one yet. Again, she makes a lesson in our past a fascinating read.” (Tony Hillerman, New York Times best-selling author)
“In all three of Faye Longchamp's adventures, Mary Anna Evans has given us insights into little-known aspects of America’s past. As an archeological tour alone, the book would be worth reading, but it’s the fascinating and complex characters that give the story life and vibrancy.” (Rhys Bowen, Anthony and Agatha award-winning author)
“Though Evans has been compared to Tony Hillerman, her sympathetic characters and fascinating archeological lore add up to a style all her own.” ( Publishers Weekly)

Imaginative and fun to read (listen to). It is fascinating and fun to learn about archeology, Mississippi's landscape, the South's and Native American peoples' culture, traditions and folk tales as Mrs. Evens takes us on Faye's imaginary journey and discoveries. The author's experiences as a Mississipian, as well as extensive research into the past and current history of the before mentioned groups of people and places played an integral part in making this story believable. Together the story, the characters and the narrator draw the listener into the imaginary setting and allow them to use critical thinking and fantasy as they try to solve the mystery and picture the events and happenings as they unfold. I enjoyed this book very much and look forward to reading the next book in the series.

I really enjoy Cassandra Campbell’s narrations but even she sounded bored with this story. I was too

my favorite so far.

I'm definitely team Joe.
I think love born out of deep friendship is the best kind.
what a dad, Joe would be!

I got really tired

In fact, I fell asleep and didn't bother to go back and finish listening. I get so sick of hearing the political and/or perceived racist views that some authors always have to foist off onto their characters. This story goes on and on and on about how all white people all hate anyone of native American heritage. Mention it if you feel like you must, but don't make it the main plot of an otherwise interesting story. The sheer amount of implied racism in this particular book is so over-the-top that I will not be listening to any more titles by this author. Heck, where I live, those with Native American ancestry are proud of it, and dig around in their genealogy for years just to prove that their g-grandmother was Native American!

These series have slowly become addicting. One interesting fact,—I learned that “sherd” is an acceptable spelling and pronunciation for the word “shard.” At first, I couldn’t figure out why the author kept using the word “shurd.” (She wasn’t,—she was using the word “sherd.”)

Interested to listen to the next one in the series!

While I'm usually drawn to hard science fiction & hard crime/thriller novels, somehow, I found my way to this series. I, absolutely, love it! Imho, literary works of art.

Mary Anna Evans's storytelling talent is excellent and her prose lovely. I learn much about the southeast US, too, while I listen, a region whose people and history I know little about, except for it's ante bellum through reconstruction years.
Plus I met her. For all she's studied, researched, travelled, and given of herself for us, her readers, she's as humble as her heroine's friend, Joe.
So, why just four stars? It's the literature within the story that supports the plot and the atmosphere. I've just never been a fan of that technique. I find it distracting.
But that my only complaint. I'm glad I've got so many more of her novels to look forward to.

Loved historical based stories and the tangible descriptions that make you feel you were there.

I really enjoy the research and history that has gone into the writing and the stories told within the novel. I like the way the author interweaves all the elements into a coherent and exciting tale. My favourite of the series so far.