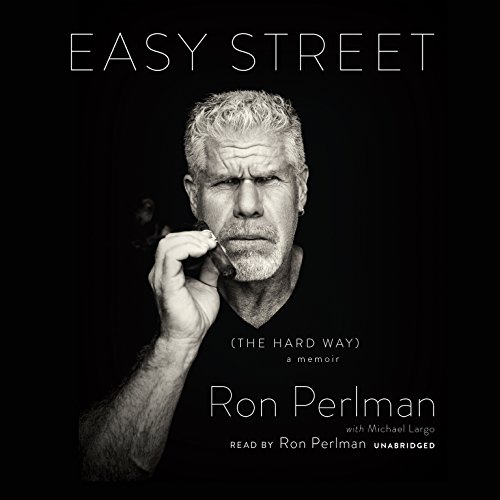 The candid, hilarious, and inspiring memoir of the iconic star of Beauty and the Beast, the Hellboy movies, and Sons of Anarchy.

A classically trained actor who cut his teeth in the East Village's off-Broadway scene, Ron Perlman - a Golden Globe winner with starring roles in the Hellboy, Drive, Pacific Rim, and Sons of Anarchy - has traveled an offbeat path to showbiz success. His story involves rising from New York's tough Washington Heights neighborhood, enduring incredible hardships, and ignoring the naysayers who taunted him for his distinctive looks. It's a tale that demonstrates the power of persistence.

With a filmography of nearly 200 credits working alongside countless stars during his 40-year career, Perlman knows the ins and outs of filmmaking. In Easy Street (the Hard Way), he shares his inspiring story for the next generation of performers.

Ron Perlman is an amazing man

Excellent book and reading! His gruff, foul mouthed exterior hides the soft, intelligent interior of Ron Perlman. It's funny to hear such truths about human existence peppered with MF's. His thoughts about SOA made me a little sad. His final thoughts in chapter 25 about the current state of the world had me saying "Amen, brother." We no longer have heroes (that are worth looking up to), we don't have standards. Ron Perlman is a stand up guy, with a true heart, and real American values. Even if you don't know who he is, you should read this book. He's definitely a unique individual that is one of those people that makes you a better person just for knowing.

Would you consider the audio edition of Easy Street (the Hard Way) to be better than the print version?

What other book might you compare Easy Street (the Hard Way) to and why?

Easy street is in a class of its own.

Yes it did. It made complete sense.

The book is full of movingly deep stories. It was a roller coaster ride for me, I willl listen to this forever. Like the frank Sinatra, Sean Connery and Sammy Davis jr. stories. This book truly takes me into a new dimension in my imagination and life.

I love Ron Perlman. He is a true inspiration. Please keep up the outstanding work Mr. Perlman.

Love some of his acting, but his political stance makes him unbearable! To be fair, I did not read this blah blah...but if I had I would rate 0 stars if possible. I will never watch anything he is in again...✌️to his acting! PS, Hand of God is God awful!

I enjoyed it until he got political

enjoyed his conversational approach to storytelling. he should have left out the politics. bad end.

A great read/listen. His narration makes you feel like you're sitting in his living room and he's just telling you stories. I thought I knew and appreciated Ron Perlman, and then I read this book. now I think I have a man crush on him.

5 Stars for the Perl

First off this is an outstanding memoir. Ron holds nothing back in this telling of his life's story. The story is written in such a way that it alternates from crass to extremely deep and insightful. When Perlman goes deep you really have to prepare yourself for some mind blowing revaluation about mans personal and existential struggles in the world. There are these larger than life characters that make appearances throughout this memoir, which force you think "damn Ron seems to know or has worked with damn near everyone in the film industry". This is an outstanding work that I think anyone would benefit from reading. The cherry that's on top of this cake is that Ron narrates this book himself and as a narrator he's at the top of the heap in terms of talent and delivery. If you have never listened to his reading of " City of Thieves" you really should he delivers a world class performance.

Still waiting for the punchline!

Would you consider the audio edition of Easy Street (the Hard Way) to be better than the print version?

I haven't read the print version - and when the audiobook started I thought it was a joke as it started in third person and then shifted to first person perspective. There were many cliches and when you say "I could go on.." it doesn't mean you should. Lot's of swearing and tough guy posturing - but it only made him more charming. He is so lovable and such a great actor that you can forgive him.

All the characters where he did impersonations - spot on! I laughed so much I nearly had to pull over as I listened to it on my way to and from work. Sammy Davis Jr, Guillermo del Toro, Marlon Brando - awesome!

When Guillermo del Toro called him 'Fatboy', when he was preparing for Hellboy.

When he talked about his family and when he attempted suicide.

I kept thinking throughout the book, that he needed extreme editing. I wondered if the cliches were deliberate and if being in the business for so long was what prompted the cliches. I kept laughing and cringing at parts so much that I thought to myself "There has to be a punchline!" After all that though, it was definitely worth it, as he is an excellent actor and great story teller.

Where does Easy Street (the Hard Way) rank among all the audiobooks you’ve listened to so far?

One of the best books I've ever read/listened too.

He doesn't take himself too seriously. He's honest. It's almost like you're having a conversation with him.

If you love Ron Perlman, you owe it to yourself to hear his story and his perspective

Damn, thanks Ron. That was everything. I gotta meet this guy. Perfect book for actors and humans alike.

This was an okay memoir, I really liked the beginning and most of the book. But like some other reviewer's stated I did not like when he got political. He is a great actor but his politics suck IMO. He is another hardcore liberal like most of Hollywood. I really wish actors, sports stars, musicians etc. would keep their politics to themselves, but I think they really don't care what their fans think, because they have so much money that putting out their political BS does not really affect their bank. That said Ron did a great job narrating his book.